Encroachment … not the neutral-zone penalty that will cost the defense five yards.  Rather

, encroachment is what happens when your neighbor’s tree roots break into your sewer system, when leaves and nuts are dumped into your gutters, or when the branches rain down on your car or lawn.   The law that governs rights and responsibilities when a neighbor’s tree encroaches on your property in only about 80 years old. Before that time, a simpler time perhaps, people didn’t resort to the courts quite so much.

The “Massachusetts Rule” you see referenced so often in tree encroachment matters arose in Michalson v. Nutting, 275 Mass. 232, 175 N.E. 490, 76 A.L.R. 1109 (Sup.Jud.Ct. Mass. 1931). This is the grand-daddy of encroachment cases, the adoption of what has become known the self-help mantra of neighbors everywhere. In Michalson, roots from a poplar growing on the Nuttings’ land had penetrated and and damaged sewer and drain pipes at Michalson’s place. As well, the roots had grown under Michalson’s concrete cellar, causing cracking and threatening serious injury to the foundation. Michalson wanted the Nuttings to cut down the tree and remove the roots. They said “Nutting doing.” 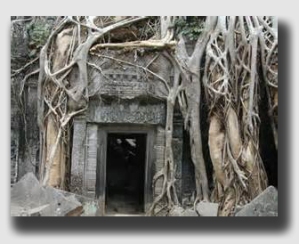 Michalson sued, asking for a permanent injunction restraining the Nuttings from allowing the roots to encroach on the his land. Oh, and Michalson wanted money, too. The trial judge found the Nuttings were not liable just because their tree was growing. He threw Michalson’s lawsuit out, and Michalson appealed.

Held: In what has become known as the “Massachusetts Rule,” the Supreme Judicial Court of Massachusetts held that a property owner’s remedies are limited to “self help.” In other words, a suffering property owner may cut off boughs and roots of neighbor’s trees which intrude into another person’s land. But the law will not permit a plaintiff to recover damages for invasion of his property by roots of trees belonging to adjoining landowner. And a plaintiff cannot obtain equitable relief — that is, an injunction — to compel an adjoining landowner to remove roots of tree invading plaintiff’s property or to restrain such encroachment.