There are a few basic peculiarities of trespass that I have written about repeatedly, but which do not seem to sink in. C’mon, people!

Recently, I was working on a case in which a utility company delivered a standard form easement to a homeowner. The owner found the document stuck in his door with a dollar bill attached. He read the easement, tore it in half, and thought nothing more of it until the utility crews – figuring he must have signed it – tore up his side yard.

The homeowner bided his time, suing many years later (but within the 21-year statute of limitations). The electric company was a Goliath, and brought in a big law firm from the big city to defend it. The lawyers were derisive in their answer, contending that the trespass complaint failed because – among other reasons – the utility workers believed in good faith they had an easement to be on the land, and, at any rate, the homeowner could not prove he had been damaged by the trespass.

I well recall the utility’s lawyers’ incredulity when I suggested that at common law, their good faith and five bucks could buy a cup of coffee at Starbucks.  Speaking of five bucks, the very fact of their trespass was the only damage the homeowner had to show. Where there is trespass, there are always damages. “You can go look it up,” I suggested.

They did. And the utility settled. 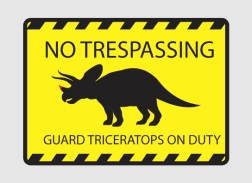 Today’s case, nearly as old as I am, is one where one homeowner let her pet dinosaur wander on the property of another… No, not really, but sometimes I feel that old. Instead, the case is one where a property owner thought some cedar trees were hers, not her neighbors. She hired a tree service to top them. Topping is never a good idea, but that’s a topic for another time. When the trespassing owner got sued, her defense was that she did not know the trees belonged to her neighbor, and anyway, the trespass did not cause any damage.

Those two concepts – intent is irrelevant and damages are presumed – are the bedrock of trespass.

Longenecker v. Zimmerman, 175 Kan. 719, 267 P.2d 543 (Supreme Court of Kansas, 1954). Alice Longenecker owned a piece of real estate. Kay Zimmerman, without her permission, directed the Arborfield Tree Surgery Company to enter Alice’s property and top off, injure and effectively destroy three cedar trees worth $150 each, which both provided shade and were ornamental. Alice argued she was entitled under the provisions of G.S.1949, 21-2435, to recover treble damages.

Alice and Kay owned adjoining residences and were neighbors for about five years. On September 8, 1950, Kay hired a tree surgery company to go onto Alice’s property to top three cedar trees. The trees were located some two or three feet north of Alice’s south boundary line. The trees before being topped were 20 to 25 feet high, and were trimmed as Alice wanted them to be.

They did not meet with Kay’s approval, however. She had the tree surgeons cut about  10 feet off the tops of the trees. The topping  meant the trees would never grow any higher.

Alice didn’t want the trees to stop growing. Cedars are not pruned from the top, but are feathered and shaped and not cropped. Alice argued that the trees were, in effect, destroyed by improper pruning. She attached a sentimental value to them as they stood; they served a special purpose as both shade and ornamental trees. 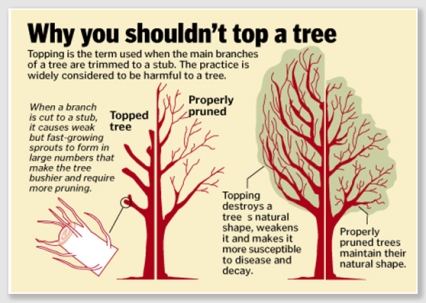 Kay told a different story. She said the trees, prior to the time they were topped, seemed to be dying out at the top and they also contained bagworms; that two or three feet were taken out of the top of one tree and about a foot or so out of the other two; that the work she had done was beneficial to the trees and that they were not injured. The work consisted of cutting out dead branches and cleaning out bagworms.

One of Kay’s expert witnesses testified that the cutting away of dead wood would not have injured the physical condition of the tree. However, he admitted that if the top is taken out, the trunk is no longer going to grow in height. Kay said she was mistaken as to the boundary line and had believed the trees were on her property.

The trial court found for Kay, and Alice won nothing. She appealed.

Held: The trial court gave the wrong instruction on trespass, and its decision was reversed.

The determinative question on appeal was whether the trial court erred in refusing Alice’s requested instruction to the effect that because Kay had admitted the trespass on Alice’s property by topping the three cedar trees, she was liable to Alice in damages. But instead of Alice’s requested instruction, the court told the jury that because Kay had

The Court held that this instruction was just plain wrong. From every trespass, that is, the “direct invasion of the person or property of another, the law infers some damage, without proof of actual injury. In an action of trespass, the plaintiff is always entitled to at least nominal damages, even though he was actually benefited by the act of the defendant.” Nominal damages are recoverable even though no substantial damages result and none are proved.”

The trial court was wrong to include a suggestion that Kay could have trespassed without causing any damage to Alice. A trespass always causes damage, even though that damage may be nominal. The trial court submitted the question to the jury whether Alice had suffered any damage by reason of the unlawful trespass, when in fact the jury should have been instructed that damages, in some amount, resulted as a matter of law.

It cannot be said that the erroneous instruction given by the trial court did not prejudice Alice.