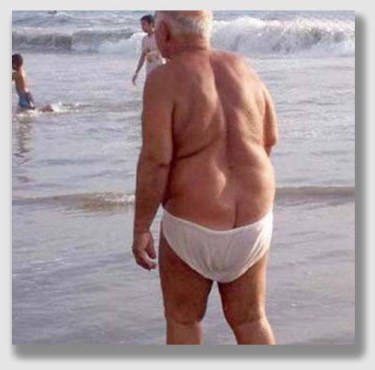 Oldsters with droopy pants – not pleasant to contemplate.

A county park had a contract with Green View — a nonprofit company with the goal of putting our shiftless senior citizens to work cleaning up parks — to maintain the grounds. This is a good thing. Otherwise, retirees with their pants drooping to show their underwear and their “tatts” and funny flat-brimmed baseball caps worn sideways on their heads just hang around and ride their little electric carts up and down streets and… you know what trouble they can be.

Green View’s people were busy staying out of trouble when a tree branch broke off a tree and struck a park patron during a summer storm. Aware that a branch would never break off in the middle of a storm unless someone was negligent, the injured woman sued the county and, for good measure, went after the old people, too. She argued that the elderly working for Green Tree had a duty to inspect the park for branches that might fall off in storms. They had been too preoccupied with talking about their regularity to carry out their obligations.

In depositions, the Green View people admitted that they had looked for dead trees, but they explained that the county employees were responsible for removing hazards like that. At least one deponent might have even denounced the plaintiff as a “young whippersnapper.”

The young whippersnapper was, to use an obscure legal term, whippersnapped. The Court ruled that neither Green View’s contract with the county nor the job descriptions for its workers included any duty to inspect the trees or warn of their dangers. The county employees — who were immune from suit (just in case you are wondering why the old folks at Green View were being picked on to begin with) — all agreed that it was the county’s duty to inspect trees and warn of dangers.

The injured plaintiff couldn’t find any duty that Green View or its senior-citizen workers owed her. Without the duty, there could be no negligence.

Senior citizen humor aside, it is this kind of litigation — and the legal fees Green View undoubtedly had to shoulder to defend an action for which there was no factual basis — that drives beneficial programs like this one (intended to provide meaningful work and activity for seniors) out of business. While an injury like the one the plaintiff suffered was lamentable, the reason branches fall in summer storms is fairly well understood.

Sometimes stuff happens, and suing anyone who happened to be nearby when the stuff happens seldom makes anything better.

Rolfhus v. County of Wright, 2001 Minn. App. LEXIS 319, 2001 WL 290525 (Minn.App. 2001). Dawn Rolfhus was seriously injured at a Wright County park in 1997 after a tree branch broke and struck her head during a summer storm. She and her husband sued the county and respondent Green View, Inc., a nonprofit organization that provides senior citizens with maintenance and custodial work at state and county parks. Green View had a contract with the county to maintain the park at which Rolfhus was injured.

Held: The grant of summary judgment was upheld. The elements of a negligence claim include a duty, a breach of that duty, proximate cause, and injury in fact. Even where no duty otherwise exists, a person who voluntarily assumes a duty may be liable for failing to exercise reasonable care in performing the duty. One who assumes to act, even though gratuitously, may thereby become subject to the duty of acting carefully, if he acts at all.