YOU SNOOZE, YOU LOSE

This past weekend was sunny, brisk and glorious, one that called for enjoying the fall splendor. Outside of a Halloween fright for three quarters of Ohio State-Penn State football (before my beloved Buckeyes awakened from their gridiron snooze to clinch the game – and, by the way, I should say “well fought, Penn State”), I spent the weekend raking up the fall splendor. A lot of it. By 7 o’clock last night, I was nodding off to sleep.

I used to have the same problem, many decades ago, in Property Law, a required course for first-year law students. All of those terms I had happily lived 22 years without knowing: fee simple absolute, livery of seizen, life estates, enfeeoffment, trespass quare clausum fregit… Contract law made great sense, civil procedure had a certain elegance,  but property…

More often than they should have, my eyes glazed over, my head slumped, and I slumbered while Professor Prosser droned. Even without first raking leaves. Ah, how education is wasted on the young.

Speaking of slumber, the defendant in today’s blast from the past did just that. Like your author, he paid too little attention to byzantine concepts like life estates. When the owner of a life estate gave him permission to harvest timber on her land, Hempy slept on his rights. The owner of the life estate died, whereupon Hempy awoke from his slumber and figured maybe he had better get those trees cut.

But the reason the timber cutting was a trespass is not terribly relevant to today’s case. Instead, it is only the setup for the real issue, which is how to value the damages.

Koonz v. Hempy, 120 N.W. 976 (Supreme Court, Iowa, 1909). Koonz sued Hempy for cutting timber on property in which he had recently obtained an interest following the death of his mother. Apparently, Koonz’s mother, who had held a life estate in the property granted by her deceased husband, had contracted with Hempy to remove timber on the property. However, Hempy did not harvest the timber until after the mother had died. The trial court ruled that mom’s demise meant that Hempy had lost his right to cut the timber, because the life estate was extinguished with her passing, and Koonz was now in possession. The court awarded damages to Koonz, and both parties appealed. 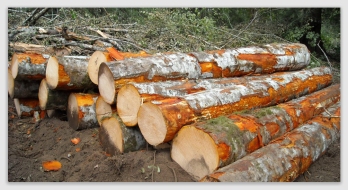