SO WAS MARY ANNE AN EMPLOYEE? 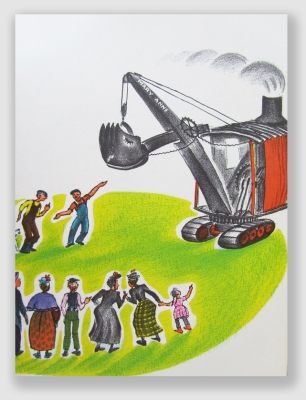 Every red-blooded American boy (and girl, for that matter) knows the story of Mike Mulligan and Mary Anne. Work had dried up for the pipe-smoking Mike and his redoubtable steam shovel, so they took a job in Popperville digging the basement for the new town hall. Mike pitched the town’s selectmen (this happened back in the day when steam shovels were female but governing officials were not) by promising to dig the new town hall cellar in only one day, a task that everyone involved agreed would take 100 shovel-wielding men at least a week to complete.

The selectmen — especially one named Henry B. Swap — were dubious of Mike’s claim that Mary Anne could dig the basement so quickly, so they made a deal with Mike that he wouldn’t get paid unless he completed the work in the time allotted.

Mike didn’t make the deadline, but the story had a happy ending anyway. Such was not the case for Terry W. Henry. Terry, an experienced timber harvester, needed work. He asked Bobby Hubbard, who ran a timber company working several tracts of leased land, for a job. Now Bobby appears to be one of those kinds of employers, you know, the kind of guy who “tries out” people and then finds them deficient, not hiring them and, for that matter, not paying them for the “tryout” period. On top of that, Hubbard made everyone an independent contractor, paying them in cash without any withholding and without any tax reporting whatsoever.

While Terry Henry was on his one-day “tryout” — the deal being that he would get paid if Hubbard found his work acceptable —  a tree branch fell on him. Of course, Bobby “Captain All-heart” Hubbard refused to pay him for the day’s work and fought Henry’s workers’ compensation claim. The Board found that under the law, Henry was an employee, despite the conditional promise of payment. Hubbard argued that Henry would have become, at best, an independent contractor and been ineligible for workers’ comp. But he abandoned his argument at the Workers’ Comp board level, and the Supreme Court wouldn’t let his lawyer resurrect the argument when the Court of Appeals hadn’t heard it. If he had made the independent contractor argument, he might have been off the hook, but it’s hard to see the “independent contractor” argument as anything more than a tax and responsibility dodge. 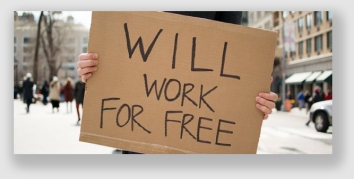 Still, Hubbard’s lawyer flubbed the case procedurally by not keeping the issue alive. Maybe Hubbard had his mouthpiece working under a “tryout” deal, too, and he won’t have to pay his solicitor.

Hubbard v. Henry, 231 S.W.3d 124 (Sup.Ct. Ky., Aug. 23, 2007). Henry had operated a bulldozer and cut timber for about ten years. He responded to an ad that Hubbard, a licensed master logger who leased the right to harvest timber from landowners, had placed. Hubbard usually employed four workers to operate a bulldozer and cut and load the timber under written employment contracts. The workers were independent contractors and supplied their own saws, chaps, and safety equipment, while he provided the bulldozer, skidder, gasoline, chains, and files.  Hubbard paid them weekly in cash for days worked, and he did not withhold taxes or issue a Form 1099 for their pay.

Henry B. Swap had nothing on Bobby Hubbard …

Because Hubbard wanted to be certain that Henry could do the job, Henry agreed to work on a trial basis for a couple of days and to receive no pay unless Hubbard was satisfied with his work. Henry recalled that they discussed pay of either $10.00 per hour or $100.00 per day (which Hubbard disputed) and said Hubbard never told him he would be hired as an independent contractor. Henry cut a number of poplars, one of which fell into a sycamore tree. Another worker then showed Henry how to do a hinge cut, and a branch from the sycamore struck him on the head, injuring him severely.

Henry later asked Hubbard to pay him for the day that he worked, but Hubbard refused, but gave him some money later but did not say that it was payment for the work. Henry filed for workers compensation payments, asserting he had been hired and was working as an employee when he was injured.  Hubbard countered that Henry had not been hired and was working on a trial basis only or — even if he had been hired — he was an independent contractor rather than as an employee. The ALJ found Henry was working on a trial basis when he was injured. Noting that state law premised employee status on the existence of a contract for hire, the ALJ also found that Henry failed to show a meeting of the minds sufficient to impute an implied contract for hire or to show that he expected to be paid for the work that he performed on the date of his injury.

Henry asserted to the Board that the ALJ erred by concluding that there was no implied contract for hire, by concluding that he worked on a trial basis but was not hired, and by failing to determine that he worked as an employee. The Board held as a matter of law that Henry was Hubbard’s employee, noting the undisputed evidence that Hubbard’s outfit was a logging company in the business of harvesting lumber for profit and that, at the time of Henry’s injury, he was harvesting timber at a job site that Hubbard controlled.

The Court of Appeals affirmed, and Hubbard appealed.

Held: Henry got his workers compensation benefits. The workers’ compensation statute defines “employee,” for coverage purposes, to include every person performing service in the course of the trade, business, profession, or occupation of an employer at the time of the injury. It is intended to protects workers who are injured while performing work in the course of an employer’s business by considering them to be “employees,” despite the lack of a formal contract for hire, unless the circumstances indicate that the work was performed with no expectation of payment.

Hubbard did not preserve the issue of whether Henry was an independent contractor in the course of an employer’s trade, business, profession, or occupation — who by law had effectively elected not to be covered by the Workers’ Compensation Act — so that matter could not be considered.