Everyone’s heard the old canard that “the right to swing my fist ends where your nose begins.” Imagine your nose is a 65-foot tall maple tree, and my fist is a backhoe. Good luck with that – most imaginations aren’t quite that agile.

Here’s the problem we’ve been looking at the past several days. We all know about “self-help,” the venerable old Massachusetts Rule that limits a landowner to trimming away encroaching branches and roots from a neighbor’s tree up to the property line. Michaelson v. Nutting – and virtually every encroachment case decided in the eight decades since that decision – has given a property owner the right to trim back a neighbor’s tree to the boundary without any limitation.

At the same time, we all know about boundary trees, those trees whose trunks enter the earth smack on the property line, so that tree is attached to the ground in both properties. Boundary trees are special, and the general rule is that neither property owner may trim the tree without the consent of the other.

But what happens when a neighbor’s tree is not on the boundary, but so encroaches on a landowner’s property – both above ground and below ground – that the practical effect of the landowner’s Massachusetts Rule self-help will be to kill the tree?  Well, like many things in life, that depends… In Washington State, the tree’s death is just so much collateral damage and tough luck to the tree’s owner. In California and New York, on the other hand, it’s Mr. Rogers’ Neighborhood: the Massachusetts Rule yields to the imperative that the tree not be harmed. 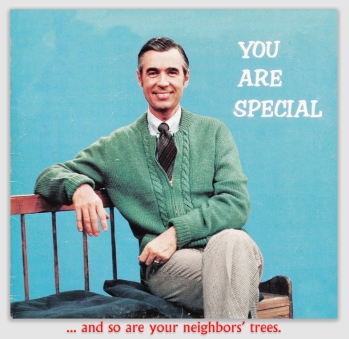 Remember King Solomon? When two women appeared in front of him arguing over who was the mother of a baby, the King proposed to settle it by cutting the baby in half so that each woman would get 50 percent of the child. That threat was enough to smoke out the imposter. In today’s case, dividing the tree in half would have had the same effect as cutting up the infant (albeit it with less blood).

The Alvarezes own a nice place in Vermont, complete with a view of Lake Champlain. They have a 65-year-old maple tree next to the property line of their neighbors, the Katzes. It was close, but the base of the tree was completely on Alvarez’s property, so this was no boundary tree the parties were dealing with.

The tree had been standing for almost seven decades. In fact, when the Alvarezes bought the property 20 years ago, the maple had already sent roots and branches across the boundary between the two parcels.

The Katzes, who also enjoy a view of Lake Champlain, have planned for a number of years to add on to their house, essentially doubling its size with a two-story addition. The only problem – or at least, the only problem we care about – was the maple tree. To add on, the Katzes would have to cut away about half of the maple tree’s branches and roots, in all likelihood killing the tree.

The Alvarezes and Katzes tried to resolve the problem amicably, but – just as happened with the women in front of King Solomon – there really wasn’t any middle ground. Either the Katzes would get their way, building onto their house and killing the tree, or the Alvarezes would have it their way. Like Dr. Seuss’s north-going and south-going Zax, neither neighbor would budge.

The Alvarezes ran to court and obtained an injunction against Katz. The trial court found that trimming the tree as Katz proposed doing would probably kill it. The injunction prohibited cutting away only about 25 percent of the tree, about half of what the Katzes needed for their ambitious plans.

The Katzes appealed, and the Vermont Supreme Court threw out the injunction. It held that the Massachusetts Rule was a blunt object, and had always been one. A landowner owns everything above and below ground level, and that owner can cut anything he or she wants to cut, without regard for the effect of the cutting. The Court said that was the law in Vermont and just about everywhere else.

The Supreme Court seemed a little uncomfortable with its decision, but it ruled in essence that the law is the law, and that’s the way Vermont had always done it. It noted, in a hint that was as subtle as an anvil, that in cases where Massachusetts-style self-help had been limited – such as in Booksa v. Patel – the theory that had been advanced was that of nuisance. In other words, the Alvarezes could have argued that Katz’s proposed trimming would so endanger the tree that it would interfere with their enjoyment of their property. Recall in Booksa, the court ordered the defendant to trim the encroaching tree reasonably. The Vermont Supreme Court telegraphed that it would probably have done the same if the Alvarezes’ lawyer had only thought to make the argument. Oops.

Alvarez v. Katz, 124 A.3d 839, 199 Vt. 510 (Supreme Court of Vermont, 2015). The Katzes own property in South Burlington in the Shelburne Bay area. The Alvarezes own the adjoining lot just to the north of the Katzes. The Alvarezes have a 65-ft. tall maple tree, the trunk of which is located entirely on their property. About half of the branches and roots from the tree cross the property boundary and encroach onto the Katz lot. Some roots extend under the Katzes’ existing deck.

For several years the Katzes have sought to expand their home by adding a two-story addition on the rear. The plans for the construction of the addition would require cutting the roots and branches that are encroaching onto their property. This could encompass up to half of the tree’s roots and branches.

The Alvarezes and the Katzes have been unable to amicably resolve the problem of the maple tree. In 2013, when the Katzes considered taking unilateral action to trim the tree’s roots and branches, the Alvarezes filed for an injunction. The superior court found it more likely than not that removal of 50% of the tree’s roots and branches would result in the premature death of the tree, perhaps within five years and probably within ten from the time of cutting. The court employed what it called the “urban-tree rule,” under which trimming the roots or branches of an encroaching tree may be proscribed if the trimming will destroy the tree. The injunction barred the trimming of more than 25% of the roots and branches of the tree.

The Zaxes wouldn’t budge, either …

Held: The injunction was vacated. The Supreme Court reaffirmed “Vermont’s long-standing right of a property owner to trim branches and roots from an encroaching tree without regard to the impact that such trimming may have on the health of the tree.”

Vermont has long recognized ownership of property to include the ownership of that which is below the ground and that which is attached overhead. The right has been clear for almost 100 years, since Cobb v. Western Union Telegraph Co., (a 1916 decision which stated the Massachusetts Rule before there ever was a Massachusetts Rule). Cobb held that “it is a sound principle that where a tree stands wholly on the ground of one and so is his tree, any part of it which overhangs the land of an adjoining owner may be cut off by the latter at the division line.” The Supreme Court criticized the trial court for conjuring up an “urban-tree rule” that would be an exception to Cobb. The trial court had considered this case to be one of first impression in Vermont because of the anticipated adverse – and likely fatal – effect the root-and-branch cutting would have had on the encroaching tree. The Supreme Court held that any attempt to “distinguish” Cobb, that is, to find that the Cobb case was somehow different just because the Cobb tree was located in a rural setting, was wrong.

Further, the Supreme Court said, the “urban-tree rule” does not enjoy the support attributed to it by the trial court. Outside of two cases, the California decision in Booksa and one obscure New York decision, the Massachusetts Rule (which maybe we should have called the “Vermont Rule”) enjoys extremely widespread support. What’s more, the Court reasoned, the Vermont legislature has had 99 years to modify the Cobb holding by statute, and it has not bothered to do so. The Supreme Court concluded that the “right to cut encroaching trees where they enter the land of another, without regard to the impact on the encroaching tree by such cutting, is well-established under Vermont law.”

The Supreme Court noted that at common law, the right to cut encroaching boughs and roots historically counterbalanced a landowner’s right to grow shade trees on his land, regardless of the impact those trees may have in casting shade or encroaching upon the neighboring property. Common law provided no claim for damages caused by encroaching roots or branches. Instead, the remedy was one of self-help, allowing the cutting of roots and branches to the extent of encroachment.

Where other jurisdictions have departed from the common-law rule and allowed actions for damages as a result of encroaching roots or branches, they have generally relied upon nuisance principles. Even where such actions have been permitted, those jurisdictions continue to recognize the right to self-help. In this case, the Alverezes did not raise a nuisance claim, so “the issue of whether a nuisance claim might exist for the encroachment of roots and branches from the Alvarezes’ tree is not presently before the Court.”

The Supreme Court defined the conundrum as follows: “[T]his case presents the competing interests of neighboring property owners. On the one hand, [the Katzes] have an interest in using their land, which they have purchased and upon which they pay taxes, as they see fit, within permissible regulations, free from limitations imposed by encroaching roots and branches from the neighbors’ tree, which they did not invite and for which they receive no benefit. The Alvarezes seek to restrict the use of the Katz property by preventing the removal of branches and roots on land that is not theirs and for which they have given nothing of benefit to [the Katzes] for suffering the encroachment. On the other hand, the Alvarezes wish to continue to enjoy their tree, which has been there for many years, without placing its viability in peril due to the construction that [the Katzes] wish to undertake.”

The Court observed that if the Alvarezes had the right to have their tree encroach onto the neighboring property, the obvious next question would be to what extent the encroached-upon property owner must suffer such an encroachment. The Supreme Court admitted that on some occasions the “exercise of self-help may result in the immediate or eventual loss of an encroaching tree, given the long-recognized rule in Vermont and its widespread support elsewhere, we decline to depart from the common-law rule in favor of the approach adopted by the superior court.”