My late and sainted mother had several favorite expressions. One of them was “he meant well.”

According to Mom, everyone meant well. The Khmer Rouge? Maybe just a little too zealous, but real back-to-nature folks. Mao? Well, there were too many people to feed, anyway. But he did get everyone to read more… even if it was The Little Red Book.

Sure, Mom. Everyone means well.

If you want a real-life example of someone who meant well, look no further than our hero in today’s saga, timberer Brad Fournia. Brad was hired to harvest some hardwood up in Clinton County, New York. And we mean “up.” Not all of New York is urban, you know. Clinton County is hard against the Canadian border, home to 78,000 people, a few thousand hardened criminals, and a lot of forest.

Well, maybe not quite as much forest as before.

It seems that landowner John Jamison hired Brad to harvest some trees. Brad, being a careful sort, asked John to mark the property line, so he didn’t stray into anyone else’s timber. Jamison showed Brad an old line of surveying ribbons that purportedly marked the property line.

Regular readers of this blog know where we’re going. It wouldn’t be much of a story if the ribbons were really marking the boundary, and Brad and his crew carefully cut on the Jamisons’ side of the line. Of course not. 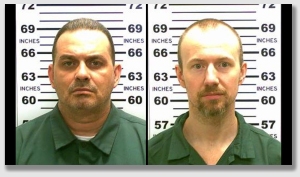 Escapees: Remember these guys? They used to live in Clinton County, too. We doubt they meant well, no matter what Mom says.

Surprisingly, the ribbons did not mark the actual property boundary, which resulted in Brad cutting down 488 trees belonging to Mr. Halstead. Of course, Mr. H. sued.

There wasn’t any question that Brad had trespassed. After all, a trespasser does not have to intend to trespass. He just has to intend to be where he ends up, which is on someone else’s land. The issue was how much Brad owed Mr. Halstead for the blunder. (And, yes, John Jamison got sued, too, so you can be sure he’ll be sharing in paying the damages).

Both Brad and Mr. Halstead submitted proof of the stumpage value of the 488 trees, and it came to about $5,000. Unfortunately for Brad, about 12 years ago, the New York legislature – apparently between scandals and pandemic bans – decided that timber theft was rampant in the Empire State. It passed RPAPL 861, which confusingly directed that the penalty for defendants cutting trees that didn’t belong to them “shall be … the stumpage value or [$250] per tree, or both.”

The trial court had trouble with such a princely figure, the result of the state lawmakers not really thinking through how their “get tough on timber thieves” measure might get applied in the real world. The court said there was a question of fact to be decided, whether the defendants “had good cause to believe that [they] had a legal right to cut plaintiffs’ trees.” Even Mr. Halstead had to concede that Brad and John Jamison believed in good faith that they were entitled to remove the trees.

In New York, good-faith belief and $4.00 is enough for a small Starbucks. The appellate court noted that Mr. Halstead was electing to seek statutory damages of $250 per tree, and that’s what the minimum he’s entitled to under the law.

Brad argued that damages of $250 per tree were not mandatory, and RPAPL 861 affords discretion to the trial court to award a lesser amount of statutory damages. The Appellate Division rejected that novel reading of the statute. Statutory damages of $250 per tree cannot be reduced, and the damages in this case amount to $122,000 “given the undisputed fact that 488 trees were removed.”

However, the Court said, because the parties put in evidence of actual loss, the trial judge could decide that the lesser amount was enough to compensate Mr. Halstead. It sent the case back for trial.

Held: If statutory damages are imposed, Plaintiffs must be awarded $250 per tree. Defendants conceded that they removed timber without permission to do so, rendering them liable under RPAPL 861. However, the trial court found questions of fact with regard to whether defendants “had good cause to believe that [they] had a legal right to cut plaintiffs’ trees.” Even plaintiffs concurred that they did.

However, plaintiffs’ good faith but mistaken belief does not matter. RPAPL 861 provides that a successful timber trespass plaintiff may elect to get actual value of the trees, a statutory sum of $250 per tree, or both. Here, Halstead elected to collect $250 per tree – which was far more that the $5,000 the 488 trees were worth – and he was entitled to do so.

Defendants argued that damages of $250 per tree are not mandatory, and that RPAPL 861 affords discretion to a trial court to award a lesser amount of statutory damages. But the language in the statute is clear, and the court must follow it. The statute unambiguously directs that defendants “shall be liable for the stumpage value or [$250] per tree, or both,” and gives no indication that a lesser amount of statutory damages per tree may be awarded. And the legislative history of RPAPL 861 – enacted in 2003 to deter the illegal taking of timber by increasing the potential damages for that activity – supports the interpretation of the statute. It was meant to “provid[e] for more suitable fines of at least $250 per tree.

The statutory damages of $250 per tree cannot be reduced. Defendants are liable for $122,000, given the undisputed fact that 488 trees were removed.

However, the trial court is not obliged to award statutory damages. It is instead entrusted with the discretion to award “the stumpage value or [$250] per tree, or both” for an unlawful taking. RPAPL 861[2]. Both plaintiffs and defendants submitted proof as to the other measure, with plaintiffs providing the affidavit and report of a forester who opined that the stumpage value of the trees was under $5,000. Inasmuch as plaintiffs’ own motion papers left unresolved the issue of whether “a lesser amount than that claimed . . . will sufficiently compensate for the loss,” the trial court correctly directed an immediate trial on the issue of damages.