One of the many badges that marks me as a curmudgeon, according to a recent book, is my preoccupation with proper language. OMG! Am I ever!  I suppose people use slang because YOLO. But because this blog aspires to be  the GOAT of tree and neighbor law sites, I’m going to stay frosty and keep it real.

I trust you recognize irony when it smacks you in the face.

I am not ashamed to admit that my gorge rises when people say “irregardless” when they mean “regardless,” say “affect” when they mean “effect,” or use “like” every third word or so. And don’t get me started about made-up nonsense like “ze” or “Mx” or “Latinx.” As far as we’re concerned, “ze” should always precede the word “plane” and be shouted by Tattoo. “MX” will always be a missile program. As for “Latinx,” it’s just wrong. Ask 97% of Latinos what they think.

But what metaphorically drives me batty is the casual and improper use of the word “literally.” The word means “actually” or “without exaggeration.” Believing as I do that the widespread devaluation of like every corner of the English language is like literally going to send us to hell in a handcart, I was surprised to see that today’s case ­– well over 50 years old – featured a witness describing “literally thousands of bees inside the trunk” of the decayed tree.

I was fascinated that, with such a swarm pursuing him, the witness took the time to count the bees, at least until he passed 2,000. That took nerves of steel. Literally.

Beyond my disquiet over the witness’s imprecise and flawed language, I was interested in the application of both Hay v. Norwalk Lodge No. 730, B.P.O.E., 92 Ohio App. 14, 109 N.E.2d 481 (Supreme Court, Ohio, 1951) and Brandywine Hundred Realty Co. v. Cotillo, 55 F.2d 231 (3rd Cir. 1951). While those decisions – which I’ve discussed recently here and here – relate to injury to passing motorists, the court here couldn’t see any practical difference between the landowner’s duty to a motorist and to a parked car. Furthermore, it found that the tree was so obviously dead and dangerous that the landowner was chargeable with knowing about its condition, although he’d only owned the property for a few weeks.

How many bees? Literally thousands …

The court said that a few weeks was not so legally insufficient a period time for him to have gotten over and inspected the place that the factfinder was wrong for finding him liable.

The trend here is clear: the law was moving toward holding that a property owner had an affirmative duty to inspect the land. Actual or constructive knowledge wasn’t enough. The absentee owner should have done a drive-by, the court decided by implication. And thus, the evolution of a requirement that an owner affirmatively care for his or her property continued.

Turner v. Ridley, 144 A.2d 269 (Ct.App.D.C. 1958). Turner owned a house facing a street on which automobiles were regularly parked. The small front yard featured a single large tree. On a fall evening, Ridley’s friend parked Ridley’s car at the curb in from of Turner’s house. Early the next morning, with no inclement weather to blame for the event, the tree toppled and fell across the sidewalk, striking Ridley’s car.

At the time the tree fell, according to the man who had parked Ridley’s car – a man named Reid ­– the tree ‘was rotten and looked like it was dead and had very few leaves on it.’ and on the night before it fell he had remarked to a friend ‘that tree looks like it is going to fall someday.’ The tree in falling broke off even with the ground, and then it was observed that the tree was hollow and badly decayed with ‘literally thousands of bees inside the trunk.’

Turner testified he had purchased the property through an agent at a foreclosure sale a month before the mishap, that the property had been vacant since he purchased it, that he had never seen the property or the tree, and that he had no notice or knowledge that the tree was in a dangerous or rotten condition. The trial court awarded judgment to Ridley for the damages he sustained.

Held: Turner was liable for the damage to Ridley’s car. While prior cases diverge somewhat, the Court found the Ohio decision in Hay v. Norwalk Lodge No. 730, B. P. O. E., instructive, holding that “an owner having knowledge of a patently defective condition of a tree which may result in injury to a traveler on a highway must exercise reasonable care to prevent harm from the falling of such tree or its branches on a person lawfully using the highway.”

Knowledge could either be actual or, as held in Brandywine Hundred Realty Co. v. Cotillo, constructive, “if such condition was known or by the exercise of ordinary care could have been known by the defendant.” 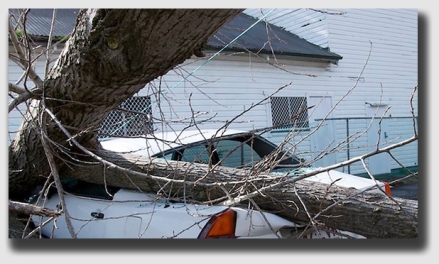 The car was the first casualty … but not the only one.

The Court admitted that Hay and Brandywine dealt with personal injuries to travelers on the highway, but it observed that there is “no distinction in principle between the case of personal injury to one lawfully traveling on a highway and the case of property damage to a vehicle lawfully parked on the highway.” The issue was whether the owner – who had only owned the property for a few weeks and who had never seen it before – could be charged with constructive knowledge of the tree’s condition. There was no question that the tree was obviously dangerous and quite dead. The Court acknowledged that “[a] three-week period is no great length of time, but we cannot rule that such period was legally insufficient time for appellant to look over his property and observe the condition of the tree and take steps to prevent its fall. We think the evidence presented a factual question as to notice and lack of care.”

“Hard cases are the quicksands of the law,” as an old maxim put it. Here, the intersection of an absentee owner, an obviously defective tree, a fairly minor damage bill, a colorful witness and lack of any defense by Turner, combined to bring about a holding that imposed additional duties on a landowner.