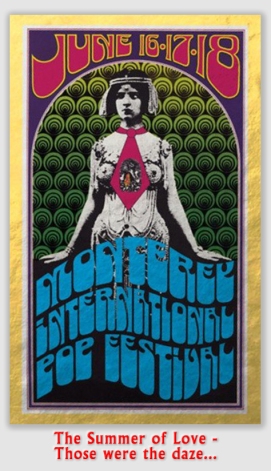 Who could forget the opening, the siter strings, Eric Burdon’s urgently whispered intonation, then the pounding of the drums? Yeah, Summer of Love, Monterey International Pop Festival, the Animals…

A property owner’s remedies when branches overhang or roots intrude from a tree on a neighbor’s land are limited to “self help.” In other words, a suffering property owner may cut off boughs and roots of a neighbor’s trees which intrude into another person’s land. But the law will not permit a plaintiff to recover damages for invasion of his property by branches or roots of trees belonging to an adjoining landowner. And a plaintiff cannot obtain equitable relief — that is, an injunction — to compel an adjoining landowner to remove roots or branches of such trees invading the plaintiff’s property or to restrain such encroachment.

We all have come to think that the Bay Staters invented the Massachusetts Rule. Fact is, they did not. Just as the Hawaii Rule was around before Hawaii was even an American possession, the Massachusetts Rule predated Michaelson v. Nutting by at least 40 years, and probably – if we delved back into English common law – much longer.

In today’s case, circa 1893, a railroad got tired of its engineer being smacked in the face by some overhanging branches belonging to Mr. Hickey. It offered him $10 to cut down the trees (worth about $255.00 today). He declined. So the railroad sent its own crew to cut the branches off at. the property line. Mr. Hickey sued. The railroad defended. And the Michigan Supreme Court gave us a Hickey Rule.

They gave us a Hickey? Maybe calling it the Massachusetts Rule is a better choice. 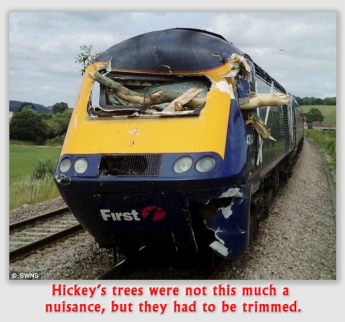 Hickey v. Michigan Central Railroad Co., 96 Mich. 498, 55 N.W. 989 (Mich. 1893). Mr. Hickey lived next to the Michigan Central right-of-way. Probably to wall off some of the noise and cinders, he planted trees along the boundary of the railroad right-of-way. The branches eventually overhung the right of way to such an extent that at times they brushed against the face of the engineer when his duties required him to lean out of his cab for the purpose of maintaining a lookout.

Finally, the Michigan Central sent a crew to trim the branches of the trees up to the line of the fence. Mr. Hickey did not claim the trees were damaged beyond this, or more than was necessary to remove the overhanging branches. The questions presented was simply whether these overhanging branches constituted a nuisance, and whether, as a nuisance, the Michigan Central had the right to cut them, and whether, before cutting them, the railroad was obligated to serve notice on Mr. Hickey that it would do so, giving him the opportunity to remove them himself.

At trial, Mr. Hickey testified that a Michigan Central supervisor had complained that the overhanging “You had better take it, or someday I will get an order to cut down those trees, and then you won’t get anything.”

Held: The Michigan Supreme Court reversed, holding that “any person injured by a nuisance, to the extent that he may maintain an action at law therefor, may remove so much of the nuisance as is necessary to secure to himself immunity from damage therefrom; but he must not be guilty of any excess therein, for, as to all excess of abatement, he will be a trespasser.”

The general rule is subject to this exception: “Where the act complained of is one of positive wrong or willful negligence, or the security of life and property is endangered, and the danger seems imminent, the party threatened with the injury may abate the same without giving notice to the wrongdoer, or waiting for him to remove it. Where, however, the nuisance is merely permitted to exist, and the case is not very urgent, notice, and an opportunity to remove it, is essential, before the complaining party would be justified in forcibly abating the same.” 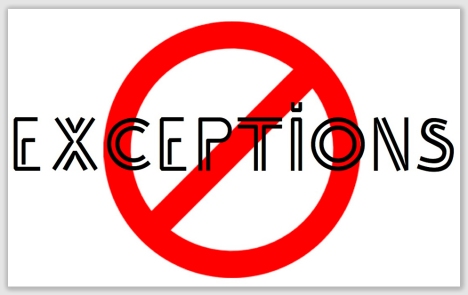 But it turns out that this exception has an exception. “There is no decided case,” the Court said, “which sanctions the abatement, by an individual, of nuisances by omission, except that of cutting the branches of trees which overhang a public road, or the private property of the person who cuts them. The permitting these branches to extend so far beyond the soil of the owner of the trees is a most unequivocal act of negligence, which distinguishes this case from most of the other cases that have occurred.”

The rule, the Court said, was that “trees whose branches extend over the land of another are not nuisances, except to the extent to which the branches overhang the adjoining land. To that extent they are nuisances, and the person over whose land they extend may cut them off, or have his action for damages, and an abatement of the nuisance, against the owner or occupant of the land on which they grow, but he may not cut down the tree. Neither can he cut the branches thereof, beyond the extent to which they overhang his soil.”

The purpose of notice in such case, the Court said, is evident: is to give to the owner the opportunity of himself abating the nuisance. Here, no one disputed that Mr. Hickey knew that Michigan Central found the overhang to be a nuisance, and he refused payment to abate the nuisance. “We think,” the Court held, that “he is not in a position to insist that he was entitled to further notice.”