THOSE OLDIES BUT GOODIES

Back a century ago or so, when the car was new-fangled, the airplane only read about in magazines, and no one had any broadband, simpler tree questions than our usual fare were being asked. And answered. 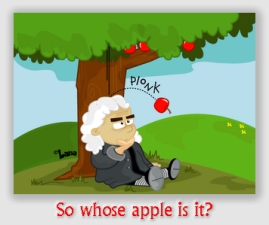 Here’s a sample tree question from those days: I have an apple tree growing close to our mutual property boundary. Some of the branches overhang your land, and every year, beautiful ripe apples fall on your side of the property line as well as on mine. Whose apples are they?

If you read yesterday’s case, you would say, “Why they’re mine, because I own the soil, the air branches above and the roots below,” remembering well the doctrine of cujus est solum ejus est usque ad coelum et ad inferos. And you would be…

At common law, the fruit belongs to the owner of the soil on which the tree is growing and not to him on whose soil the fruit happens to fall.

Now let’s make the issue more complex. Mr. X owns the timber rights to Blackacre (the name of the mythical piece of land that is the centerpiece of every first-year law school property law question). Ms. Y, however, holds title to Blackacre, subject only to Mr. X’s right to cut down the trees.

Now it turns out that the Blackacre trees are quite fecund, shedding copious amounts of valuable chestnuts. Ms. Y plans to make chestnut stuffing at Thanksgiving. Mr. X, however, says the nuts are his, because they came from the trees to which he has the rights to the trees. He intends to roast the chestnuts over an open fire at Christmas.

Neither did Roscoe Vincent and S.R. Haycraft, protagonist and antagonist in today’s 104-year old antique case from Kentucky.

The court sorted it out for the boys. It’s answer? ‘It depends.’

We love those kinds of answers.

Vincent v. Haycraft, 66 S.W. 613 (Ky.App. 1914). Gillis Vincent conveyed 35 acres of woodland to S. R. Haycraft, reserving to “all timber upon the land herein conveyed with the free and unobstructed right to cut and remove same for the final period of seven years from this date.” Shortly after the sale, Gillis sold the timber rights to Roscoe Vincent. A year later, Roscoe bought the acreage from S.R. Haycraft. 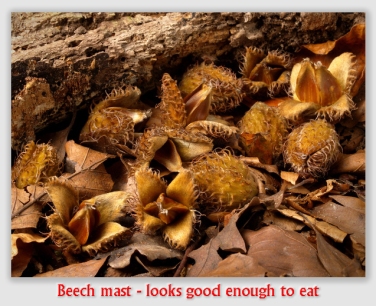 But S.R. reserved possession of the acreage for a year, agreeing to give occupancy of the tract to Roscoe on New Year’s Day 1913. The timber on the land consisted principally of beech trees, and in the fall before S.R. gave up possession, the trees produced a bumper crop of mast.

Mast is the fruit of the beech tree, found in small burrs that drop from the tree in autumn. They are small, roughly triangular and edible, with a bitter, astringent, or in some cases, mild and nut-like taste. They have a high enough fat content that they can be pressed for edible oil. At the time, mast was chiefly valuable as a food for hogs. The beech mast ripened and fell on the ground in the months of October and November.

The Court agreed that S.R.’s purpose was to reserve until the following January 1st whatever estate he had in the land by virtue of his original deed, and it acknowledged that mast is as much the “fruit of the beech tree as the acorn is of the oak, the chestnut of the chestnut tree, or the walnut of the walnut tree.” But it is not like the fruit of a fruit tree.

In the case of fruit falling onto adjoining property, the Court said, the neighboring landowner on whose soil the fruit falls has no interest in the adjoining land of which the tree is a part, and thus, no right to the fruit. Nor is it like the sale of an orchard with the reservation of possession of certain of the trees. “The sole purpose of reserving an orchard or certain fruit trees,” the Court held, “would be to reserve the fruit, for fruit trees are valuable for the fruit alone.”

Here, the case depends on the parties’ intention. The primary purpose of the reservation was the timber itself, and not the incidental fruits of the timber.

Roscoe retained the right to the mast, in other words, as long as it was hanging on the tree. When, however, the mast became ripe and fell on the ground, it was no longer a part of the timber, and the right to cut and remove the timber did not carry with it the independent right to go on the premises and carry away the fallen mast.

Thus, S.R.’s retention of the use and possession of the land until the following January 1st gave him the right to collect the ripened mast which had fallen on the ground during the months of October and November.