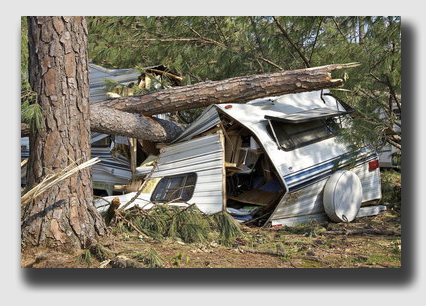 Fun … but not that sturdy …

Carefree RV living. Groovin’ on the high life in your boyfriend’s parents’ backyard, roughing it in a Coleman camper… what fun!

At least it was fun until an unexpected storm blows through, and a devastating derecho lays waste to your suburban Buffalo neighborhood (I’m guessing this was the well-documented Labor Day 1998 Derecho event). A branch broke off a tree in during the blow, and it fell on the camper, injuring Mary Simet and apparently writing the final chapter of her relationship with beau Randy Newman (no, not that Randy Newman).

Derechos are very much in the news. One just marched through Iowa last week, kicking up a massive dust storm some likened to the Middle Eastern “haboob.” But our focus here is not on the dust or the tornadoes it spawned, or even on the derechos that have hit metro areas like Philadelphia or Nashville. Instead, our focus is not even on the breeze itself, but rather on the legal winds that followed the storm.

Mary sued Coleman. Its flimsy camper couldn’t absorb the impact of a massive tree branch in a windstorm, imagine that! And for good measure, Mary named her soon-to-be ex-boyfriend and his parents, claiming that the branch was rotten and they should have cut it off, or not put the camper there, or warned her, or prevented the storm, or… or something. You know the drill. I’ve been injured. Therefore, someone’s gotta pay! And that’s when your lawyers start looking around for defendants who have insurance. 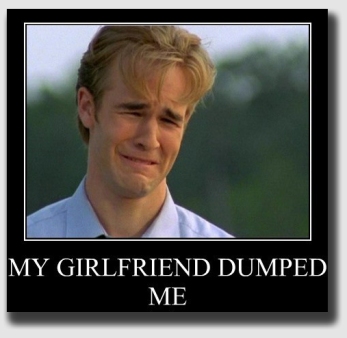 It’s worse than that, Bucko – she sued you, too. Relationships often end badly, but seldom this badly.

After the storm, of course, the Lehmans and their neighbors cleaned up. Mary’s alert and well-read lawyer complained that the cleanup wasn’t done because waste had been laid to the neighborhood or any reason so pedestrian as that. Instead, he bloviated, the cleanup was a grand conspiracy to destroy evidence his client needed for her lawsuit, a disreputable legal maneuver known as “spoliation of evidence.” The trial court, amazingly enough, agreed, but nevertheless concluded that because the evidence that had not been spoliated showed that any rot on the limb was not clearly observable, the Lehmans (and the broken-hearted Randy) were off the hook. And the whole derecho event was an act of God for which the Lehmans ­– including the Facebook-relationship-status “single” Randy – could not be blamed.

Wow. Sued by your own girlfriend. Now that’s what I call getting dumped.

Simet v. Coleman Co., Inc., 839 N.Y.S.2d 667 (N.Y.A.D. 4 Dept. 2007). Mary Simet suffered catastrophic injuries during a severe storm, when a tree limb blew onto the camper in which she was sleeping with her boyfriend at that time, Randy Newman.

The camper was owned by Linda (Randy’s mother) and her husband, David, and was located in their backyard. The limb, located approximately 30 feet from the camper, broke during an unusually intense storm with high winds, known as a “derecho.” Mary and Randy were unaware of the approaching severe storms when they retired to the camper and, indeed, the first severe storm warning wasn’t issued until after the storms had passed through the area.

The Lehmans had no notice that the tree from which the limb broke was decayed or defective. Mary’s expert opined that, regardless of whether the tree appeared to be healthy, the Lehmans would have been advised by an arborist to secure the limb if they had retained an arborist to inspect their trees.

On the advice of their insurance carrier and as part of a neighborhood clean up after the storm, the Lehmans removed the branch and the camper remains after photographic evidence was collected.

Mary sued Randy and his parents, and then she moved to strike their answer based on their alleged spoliation of that evidence. The trial court struck the Lehmans’ answer because of the spoliation, but then granted summary judgment for them anyway, and threw out Mary’s case.

Mary appealed, and so did the Lehmans. 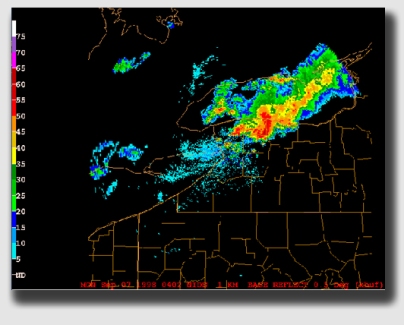 A radar plot of the Syracuse-Buffalo derecho of September 7, 1998. “Derecho” is a term derived from Spanish for “straight,” and is characterized by intense straight-line winds.

Held: The Court of Appeals held that striking the Lehmans’ answer based on spoliation was not warranted, that the Lehmans were entitled to summary judgment, and the falling limb was an act of God that precluded Randy’s liability.

The Court found that the Lehmans removed the limb and camper not to frustrate the plaintiffs but only after their insurer gave permission and as part of a neighborhood effort. They had carefully photographed it before disposing of it. At most, the spoliation of the evidence was negligent, and the remedy striking a pleading for negligent spoliation is a drastic sanction that is appropriate only where the missing evidence deprives the moving party of the ability to establish his or her case. That wasn’t the situation here.

Furthermore, the Lehmans weren’t liable to Mary Simet. The Court held that they did not create the dangerous condition with respect to her presence in the camper, and did not have constructive notice that the tree from which the limb broke was decayed or defective. No one was on notice a storm was coming. The fact that an arborist, if one had been hired, might have advised the Lehmans to secure the limb is irrelevant. New York law requires that the manifestation of tree decay must be readily observable in order to require a landowner to take reasonable steps to prevent harm.

Finally, the falling of the tree limb during the storm was an act of God that precluded Randy’s liability, with whom Mary was staying in the camper at the time.