I CAN SEE FOR MILES

In the land of pleasant living, we can and often do sue for almost anything. Even so, today’s case is especially egregious. 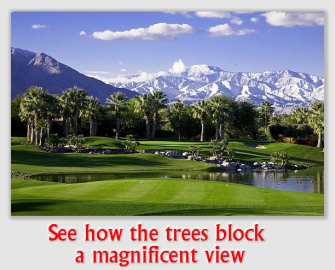 Today’s plaintiff, Betsy Stibler – whom the court of appeals suggests just may be hypersensitive – apparently had gotten used to seeing for miles and miles from her kitchen window. Or at least to the 18th hole of the golf course next door. When the owner of the country club next door, planted a number of additional trees on its golf course – trees that neither hung over or grew under Betsy’s property – she sued. Sued for no better reason than the trees interfered with her seeing goings-on on the golf course.

OK, the world is full of people like Betsy (who should be named Karen). Not only do such people claim a right to the air they breathe, they claim the air we’re breathing, too. And everything is personal. Note that Betsy did not just sue because the golf course’s trees accidentally or even negligently blocked her view of its property: she claimed the trees were planted maliciously, for the purpose of annoying her.

There are a lot of Betsies in this world who think it’s all about them. But most of those other Betsies don’t have the spare change to hire a lawyer to sue the offending tree planters. Those who do have the money usually have better sense than to fritter it away in a foolish lawsuit, and even then, who don’t have that good sense usually cannot find a lawyer with the same reckless approach to litigation as they do. They enter their attorney’s office full of rage, and then he or she patiently talks them off the ledge.

As my famed relative (so we Roots like to think, at least) Elihu Root once said, “About half the practice of a decent lawyer is telling would-be clients that they are damned fools and should shut up. ”

But occasionally we hit the frivolous litigation trifecta, and that happened in this case. Betsy convinced herself that God or the subdivision or someone had decreed that she should always be able to see the golf course (although why she wanted to see it puzzles us), and she apparently had the excess money to pay a lawyer to tilt at her windmill for her. Unsurprisingly, the magic combination of wealth, entitlement and stupidity enabled Betsy to find a lawyer hungry or foolish enough to take the case.

Now, all that was missing was a compliant judge. Fortunately for the defendants, Betsy could not find one of those. It turns out that for trees to be declared a nuisance in Tennessee requires less sensible judges, not to mention more sensible harm than some cranky lady who does not like the neighbors’ new landscaping.

Stibler v. The Country Club, Inc., Case No. E2014-00743-COA-R3-CV (Ct.App. Tenn., Mar. 9, 2015). Betsy Stibler owned a residence next door to The Country Club’s eponymous golf course. In 2013, The Club planted trees all over its gold course, including Green Giant and Skip Laurel trees planted on the portion of the course which lies behind Betsy’s house. The trees do not encroach on Betsy’s land, and caused no physical damage to her place. But what they do do is obstruct Betsy’s view of the course.

Betsy sued, claiming The Club had created a nuisance by planting the trees and thereby obstructing her view of the golf course. In fact, she claimed the trees were planted “for the purpose of annoying Plaintiff and decreasing the property value of Plaintiff,” and that she was “being deprived of her right/easement appurtenance of enjoyment of all persons owning lots in said sub-division of the park space (i.e. [sic] golf course) as provided by the [subdivision restrictions].”

The applicable subdivision restrictions state that “no noxious or offensive trade or activity shall be carried on upon any lot nor shall anything be done thereon which may be or may become an annoyance or nuisance to the neighborhood,” and “any park spaces as shown upon the plat, will not be built upon but preserved as ornamental park spaces for the enjoyment of all persons owning lots in said sub-division.”

The Club filed a motion for summary judgment, which the trial court granted on the grounds that Betsy could not prove that the trees constituted a nuisance.

Held: The trees are not a nuisance.

Betsy argued that the subdivision restrictions meant that The Club should be prohibited from interfering with her enjoyment of her property “by changing the very character and nature of her home as a golf course view property.” Betsy asserted that because the trees are a nuisance, they are prohibited by the subdivision restrictions. She also contended that the requirement that park spaces, which Betsy asserted included the golf course, must be preserved for the “enjoyment of all persons owning lots in said sub-division” meant her view of the course had to be maintained.

The Court disagreed with Betsy’s premise. The subdivision plat designated park spaces as “park spaces.” The golf course was labeled “golf course.” The Court said that Betsy’s “desire that the golf course be treated as a park space even though it is not designated as such on the plat is contrary to the very paragraph 7 that Plaintiff relies upon. Further, nothing within the subdivision restrictions guarantees Plaintiff an unobstructed view of the golf course. Nor is there any provision within the subdivision restrictions that prohibits Defendant from planting trees on its own property. This issue is without merit.”

The Court observed that under Tennessee law, a nuisance is anything that annoys or disturbs the free use of one’s property or renders the property’s ordinary use or physical occupation uncomfortable. “It extends to everything that endangers life or health, gives offense to the senses, violates the laws of decency, or obstructs the reasonable and comfortable use of the property… As long as an interference with the use or enjoyment of property is substantial and unreasonable enough to be offensive or inconvenient, virtually any disturbance of the use or enjoyment of the property may amount to a nuisance.”

When trees are involved, Tennessee law holds that “encroaching trees and plants may be regarded as a nuisance when they cause actual harm or pose an imminent danger of actual harm to adjoining property.”

Here, the only damage Betsy can cite is that she thinks her property is worth less because she can no longer see the golf course. The Court held that her claims “are simply insufficient to give rise to a claim for nuisance. Plaintiff has directed us to nothing which would give her a protected legal right entitling her to a view of Defendant’s property.”

The Court cautions that it was not suggesting that trees could never constitute a nuisance, but just that “given all of the facts and circumstances in the case now before us at this time, Defendant has shown that Plaintiff cannot prove that the trees at issue in this case constitute a nuisance.”