CLIVEN BUNDY HAS A GUN… OHIO HAS THE COURT OF CLAIMS

Recently, we had a kerfuffle in our home county over pipeline company employees giving notice to people that they would be coming onto private land to survey for a new underground pipeline. The nature lovers on the left united with the libertarians and assorted wingnuts on the right to argue that the state could not let these pipeline renegades trespass on our sacred private homesteads in order to plan an environmentally cataclysmic pipeline. Think “pipeline construction equals K-T extinction event,” and you get the idea.

You may remember that famed anti-government rancher Cliven Bundy had a similar problem – government functionaries trespassing on his land just because he was letting his cattle trespass on government land. His approach was much more direct, employing caliber .223 (essentially 5.56 mm, although there are differences between the cartridges  and loadings we won’t get into here) and ending up with two criminal trials in two different federal courtrooms (and two “not guilty” verdicts, we hasten to add). Clive’s approach was every bit as effective as that of our home county protesters… which is to say “not very.”

Our ad hoc coalition of pipeline opponents lost, of course. They, like many landowners, were unhappily surprised to learn that state laws – written by state legislators, after all – permit state employees, agents, and even employees and agents of public utilities to come onto private land at any time to conduct surveys for public works projects.

That’s what happens when you get in the way of progress. You get both disappointment and a pipeline through your side yard. But sometimes, some landowners can bite back.

Ron and Maggie bit back, maybe not hard, perhaps just nipped back a little, when the Ohio Dept. of Transportation sent some local yokels onto their land to remove three trees believed to be in a highway right-of-way. But no one checked the R-O-W to be certain, and half of the three trees – yes, your math is right, 1.5 of the 3 trees – were not ODOT’s to cut. What’s more, the county boys seemed to have run bulldozer races through Ron’s and Maggie’s protected wetlands, laying waste to a fragile ecosystem, harming the habitat of the woolly salamander (or something like that), and pissing off the landowners.

Ron and Maggie demanded justice in the Ohio Court of Claims. By the time the Court was done whittling down their claims, they got their measure of justice – but it was a small measure, indeed.

Kerns v. Ohio Dept. of Transportation, 2017-Ohio-7154 (Ct. of Claims, July 25, 2017): Ronald Kerns and Margaret Ruth Leslie owned 18 acres of mostly wooded property, including federally protected wetland with vernal pools that provide a habitat for salamanders. When the State of Ohio had to replace a bridge on a road in front of the property, the State notified the owners that its representatives would be coming onto the land to survey, that they would use due care in doing so, but if there was any damage to the land, the State would pay for it. Like most states, Ohio had laws that authorized state employees to come onto private property for such purposes. 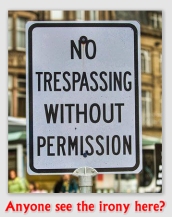 The day after Christmas 2014, crews from the Portage County Engineer’s Office came onto the property and laid waste, cutting down trees inside and outside of the state right-of-way, running heavy equipment across the property, dumping wood chips in the vernal pools (resulting in ecological damage to the wetlands on the property); and leaving large drag marks where larger trees were removed. Ron and Maggie asserted that trees and vegetation on their property were damaged or removed without either their permission or the permits required by the EPA.

The engineer testified he asked Portage County to remove a hickory tree that was larger than 18″ wide, a swamp white oak that was over 50” wide, and a dead tree trunk. He thought the three trees that he had marked to be removed were all within the right-of-way. When he learned that more than those three trees had been removed, he sent an assistant to check on the damage. The assistant found that heavy equipment had been on the property, that the wetland was disturbed, that wood chips had been cast into the vernal pools, that many more trees had been cut down, and that vegetation had been disturbed.

Jason Knowles, a certified arborist, used the Trunk Formula Method to calculate a core value for each type of tree. According to Knowles, Ohio has its own guide for what the value of a tree should be. Knowles examined the tree stumps to determine the species and size of the trees that were removed. Knowles determined that a total of 18 trees were removed, in an area that was 60 feet long by 60 feet wide. Although Knowles observed damage to the vernal pools from the wood chips, and damage to the soil due to the heavy machinery tracks, he did not determine a value for either soil compaction or vegetation that was removed. Knowles testified that the value of the trees that were removed totaled $18,200.

ODOT’s expert, Charles Flagg – a real estate appraiser – testified the damage to the plaintiffs’ property had no impact on its market value, in that the property was densely wooded, and the loss of trees was not substantial and had no effect on the market value of the property.

Held: The Court first concluded that the Portage County Engineer did not trespass on the property. A trespass occurs when a person, without authority or privilege to do so, physically invades or unlawfully enters the private premises of another. Because state law granted ODOT the privilege to cut, trim, or remove any grass, shrubs, trees, or weeds growing or being within the limits of a state highway, and enter private land to conduct a survey for plans and specifications for proposed projects, the agency and its representatives had a privilege to enter plaintiffs’ property and, therefore, did not commit a trespass.

While Ron and Marge could not prove that ODOT was liable for treble damages under O.R.C. § 901.51 – because they could not prove ODOT was reckless – ODOT nevertheless was responsible for the removal of one and a half trees on plaintiffs’ property outside of the right-of-way (one of the trees straddled the right-of-way boundary line, although it is not clear how ODOT could have removed only its half). Still, the Court said, the removal of those trees “was not so extreme as to amount to a substantial deprivation of all of the rights of ownership of plaintiffs’ property” and thus did not rise to an unconstitutional “taking” of property in violation of the 5th and 14th Amendments.

What’s more, because ODOT only told the County to remove three trees, it ws not responsible for the additional trees, including two green ash trees, two, 12” wide bitternut hickory trees, and twelve saplings, that the County Engineer destroyed. 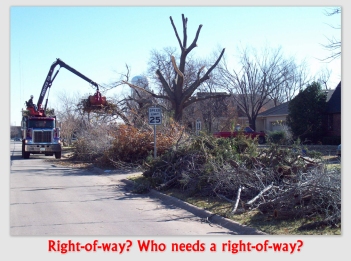 When a party trespasses and cuts trees that are part of a woodland mix and not unique, the ordinary measure of the harm is the difference in the fair market value before and after the cutting. However, the Court said, “there is an exception… in which restoration costs may be recovered in excess of diminution in fair market value when real estate is held for non-commercial use, when there are reasons personal to the owner for seeking restoration, and when the diminution in fair market value does not adequately compensate the owner for the harm done.” The Court held that “destruction of trees that form part of an ecological system of personal value to the owner justifies restoration cost as a measure of damages. In addition, in an action based on temporary injury to noncommercial real estate, a plaintiff need not prove diminution in the market value of the property in order to recover the reasonable costs of restoration, but either party may offer evidence of diminution of the market value of the property as a factor bearing on the reasonableness of the cost of restoration.” Diminution in value is a factor to be considered in determining whether restoration costs are reasonable, but it is not itself an element of damages that must be considered. Finally, in cases involving trespass that results in the removal of trees or other vegetation, “a landowner is entitled to recover reasonable restoration costs, plus the reasonable value of the lost use of the property between the time of the injury and the restoration.”

The appraised value of the trees may not necessarily be the same as restoration cost, the Court said. While there was no change in the market value of plaintiffs’ property as a result of the tree cutting, certainly, the Court said, the three trees “had some value, especially the swamp white oak, in that it was located in a federally protected wetland on plaintiffs’ property, and plaintiffs testified credibly that the trees form part of an ecological system of personal value to them.” The Court found the plaintiffs were entitled to $12,843.00 in reasonable restoration costs and reasonable value of the lost use of the property between the time of injury and the restoration.