In this day and age, when so many people do the bare minimum needed to get by, it’s refreshing to read about a pair of go-getters like Bob and Ted. When the Weisslers built their dream home on the Finger Lakes in Palmer, Alaska, they arranged for electric coop Matanuska Electric Association for power. They signed off on an easement with MEA for a 4-foot wide easement, a matter of some importance to the Weisslers, who wanted the maintain their privacy by cutting as small a swath through the trees as possible.

A work order was drawn up for the electric installation, noting “R2-4, 80 ft,” which in MEA-speak meant a four-foot right of way, 80 feet long. MEA dispatched Bob and Ted to clear the path on Weissler’s property. Ted admitted that they knew the clearing was to be four feet wide, 80 feet long, but the boys were energetic and looking for a chainsaw adventure. They cleared the stately pines from the road all the way to the northeast corner of the house and then, spying the meter box on the southeast corner of the building, decided to continue to clear to that corner as well. Ted knew the Weisslers wanted electrical service as soon as possible, and he and Bob figured they were exceeding expectations by enlarging the clearance to get the lights turned on that much quicker.

Their enthusiasm was as unbridled as their chainsaws were sharp. Bob and Ted cut a swath that, instead of being four feet wide, was up to 21 feet wide. The cutting cleared about 1,200 square feet, some four times what the work order called for and the Weisslers wanted.

The Weisslers sued MEA for breach of contract and trespass, claiming treble damages for loss of timber under Alaska Statute 09.45.730. Punitive statutes mandating double or triple damages for wrongful cutting of timber are common in virtually all states, the thinking being that merely requiring a wrongdoer to pay the value of the tree was insufficient deterrence where the cutting was reckless or intentional.

There is always a tension in calculating damages when the trees cut were not for commercial timber. It’s straightforward where the stand of timber is kept for sale. The plaintiff does some timber cruising, and the stumpage value is set. The trial court then trebles it and sometimes (depending on the state) dumps in attorneys’ fees, too. But what happens when the loss is of trees that lack much commercial value but are of great value to the homeowner… say, like the Weisslers, the homeowners love the privacy a stand of trees affords. Here, as the proper measure of damages, the court chose the cost of restoring the property to the approximate condition that existed before the cutting. The judge awarded compensatory damages of $5,250.00 ($4,050.00 restoration costs and $1,200.00 for maintenance), and then applied the treble damages provision of AS 09.45.730 and ultimately awarded $15,750.00, as well as attorney’s fees of $2,200.00 and interest of $6,300.00 for a total judgment of about $25,000.00.

MEA argued vigorously that the treble damages statute did not apply to cases like this one, where it was lawfully on the property but just sort of exceeded its brief. The statute provides that treble damages apply unless “the trespass was casual … or the defendant had probable cause,” in which case, only actual damages may be recovered. But the appellate court said nothing doing. “Casual” means, essentially, negligent entry onto the property, such as if a car swerved off the road and hit a tree. MEA’s crew intentionally went beyond the easement and meant to cut down the trees.

As for “probable cause,” the court said that means “an honest and reasonable belief.” Ted and Bob knew the easement limits. They went beyond them, and – good intentions aside – they were trespassers, and not casual ones, either. 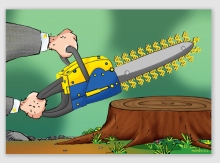 Matanuska Electric Association v. Weissler, 723 P.2d 600 (Alaska 1986). A couple of overzealous electric utility workers cleared a swath of up to 21 feet wide to bring electric service to a new home, even though the homeowner had given the utility only a 4-foot wide easement. The homeowners sued for trespass and asked that Alaska’s treble damages statute for wrongful timber cutting be applied.

The trial court agreed and trebled the damages, which were based in the first instance on the cost of restoration of the property. The homeowners won a $25,000 judgment. The utility, MEA, appealed.

Held: MEA was liable for treble damages. The utility argued that the treble damage statute’s primary purpose was to deter those who pursue their own objectives on a public right of way from disregarding the adjacent landowner’s interest. The Alaska Supreme Court rejected that argument, pointing out that “MEA’s construction of the statute would allow the most willful of trespassers, i.e., those who enter onto timber land to cut and sell another’s merchantable timber, to be liable for only single damages.”

MEA also argued that urges the court to apply common law principles governing punitive damages. Punitive damages require malice, MEA argued, and there was none here. The Supreme Court looked to Oregon’s treble damages statute (the law on which Alaska’s version was based). The Oregon courts had held that the legislature properly exercised its prerogative to define when single damages should apply and when treble damages should apply. The legislature abrogated common law here, and the statute is reasonable.

The statute requires that the trespass be without lawful authority, and MEA argued that it did not trespass because it had the Weisslers’ permission to be there. But, harkening to the Restatement (Second) of Torts § 168 comment d (1965), the Court held that the rule is well recognized that “one who has a private easement of way becomes a trespasser when he goes beyond its boundaries.” MEA exceeded the scope of the easement that the Weisslers granted and thus trespassed without lawful authority.

But, MEA asserted, any trespass it committed was “casual,” and hence only single damages should be awarded. MEA contended the trial court “found MEA’s excessive cutting to be the result of negligence and mistake,” but the Alaska Supreme Court disagreed. While the trial judge said that this was not a case where people were “recklessly cutting down other people’s trees without regard for them,” she nevertheless described MEA’s conduct as negligence “verg[ing] on recklessness.” At any rate, “casual” does not mean negligent. Instead, it comes from a 19th century New York statute, in which “casual” meant “casualty” or “involuntarily,” contrasted with “designedly and under a claim of right.”

“Casual,” the Court said, “does not include a mistaken belief in the authority to cut trees.” A trespass committed under a negligently mistaken belief in the right to cut would not be “casual,” the Court said, because “the trespasser intends to cut.” Only where the trespass is unintended is it “casual.” Once a trespasser forms an intent to enter the land, the trespass becomes “willful,” and the plaintiff may recover treble damages.

Finally, MEA lacked probable cause to cut the Weisslers’ trees. The statute awards only single damages where a defendant had probable cause to believe that the land on which the trespass was committed was the defendant’s own or that of the person in whose service or by whose direction the act was done. The Court said that probable cause means “an honest and reasonable belief.” By definition, the Court ruled, “a negligent mistake as to authority cannot qualify as probable cause since negligence involves unreasonable conduct.

The Alaska Supreme Court concluded that the tree damages statute “mandates treble damages unless the trespasser exempts him or herself” by proving, as an affirmative defense, that single damages apply.