Today, we continue to examine the situation faced by our Granite State tree victims, Larry and Laura Littoral. If you read yesterday’s post prior to your third Arnold Palmer martini, you recall that the Littorals have both a cottage on a pond – which is beautiful –and a pesky neighbor, Wally Angler – who is not so beautiful.

Fisherman Wally’s entreaties to the Littorals that they cut down some dead trees on their property, dropping them into the pond where they will provide a habitat for the fish Wally loves to catch, fell on deaf ears. It seems  the Littorals liked the contribution their standing dead timber made to their cottage ecosystem. So when the Littorals were absent one fall weekend, Wally took matters into his own hands, hiring a tree service to cut down the trees. Wally of course denies having any role in the tree’s mysterious felling, but for the sake of our analysis – and because we recall Marcus Tullius Cicero’s incisive question, cui bono? (that is, “who benefits?”) – we reasonably assume that proving Mr. Angler was the only guy with motive, opportunity and means to cut down the trees will be child’s play.

Yesterday, we considered New Hampshire’s trespass to tree statute, R.S.A. § 227-J:8, which has been around in some form since the early 19th century. It’s a pretty solid statute, providing that no person shall negligently cut, fell, destroy, injure, or carry away any tree or part thereof on the land of another person. If someone violates the statute, he or she is liable for a forfeiture to the aggrieved landowner of anywhere from three to ten times “the market value of every such tree, timber, log, lumber, wood, pole, underwood, or bark cut, felled, destroyed, injured, or carried away.”

Notice that we used quotation marks in the foregoing paragraph. They’re there for a reason. You see, the rub in 227-J:8 is that the statute turns on the market value of the trees. That worked very well when the kind of timber trespass going on was limited to a lumberman taking a thousand trees from the wrong side of the boundary marker. Indeed, that was precisely the kind of conduct at which the statute was aimed. But 227-J:8’s a tougher fit where only two or three trees are cut, not for their market value but rather for some noncommercial reason. The Littorals could sue under 227-J:8, but what would the market value be of few dead trees (or even a few live ones)?

In a stretch perhaps dictated by necessity, the New Hampshire Supreme Court in the case we discuss below did hold that “market value” may be measured as the cost of a replacement tree of comparable value, but even that might not get the Littorals very far. Such an analysis would bring them fairly quickly back to a measure of the fair market value of the dead tree itself.  To get any traction, the Littorals have to get beyond the value of the dead tree qua tree, and instead find a measure of damages that focuses on the value of the dead trees to the property.  We’ll be focusing more on that tomorrow, but for now, we need some legal vehicle that will let them be compensated adequately for Wally’s selfish attack on their property.

Fortunately, the common-law remedy of trespass continues to enjoy vitality in New Hampshire. Assuming the Littorals lost three dead trees, and assuming that they could find an expert who would testify that the stumpage value of those trees was $300 apiece, they would not quite get to $1,000 in damages (before 227-J:8’s multiplier was applied). But the three trees – referred to in the tree law world as “ornamental trees – were worth much more to the Littorals (and their real estate).

Where the trees lost are not commercial timber, but rather trees with aesthetic value (or some other specialized value), New Hampshire courts will permit the injured party to sue in trespass, and for damages to show either that the market value of the real estate has fallen because of the loss or that the cost of replacing the lost trees rises to some ascertainable figure.

Here, although the Littorals are entitled to (and will probably want to) include an R.S.A. § 227-J:8 claim, they will also want to allege the good old plain-vanilla tort of trespass, showing that Wally’s transgression damaged their property as a result. After all, New Hampshire lets the injured homeowner include both the time-tested common-law trespass claim and an R.S.A. § 227-J:8 claim in the same complaint. Common-law trespass may be plain vanilla, but it’s survived as a cause of action for centuries because it works.

The Littorals report that they have evidence Wally moved the iron-pin boundary markers before the tree service arrived, so as to fool otherwise cautious tree workers that he owned the land on which dead trees in question stood. As it is in most states, moving property markers is a misdemeanor in New Hampshire, not to mention being pretty compelling evidence of the willfulness of Wally’s conduct. Indeed, in most places, this would probably be enough to win punitive damages against Wally, which are extra amounts meant not to compensate the plaintiff for his or her injury, but rather to exact a pound of flesh from the misbehaving defendant. 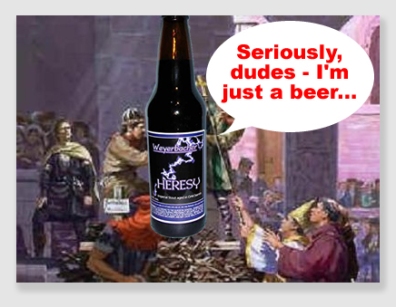 Burning a beer at the stake? Now that would be a “monstrous heresy.”

But New Hampshire isn’t “most places.” Rather, “the punitive function of exemplary damages has been rejected in forceful and colorful language” by the New Hampshire Supreme Court. “‘The idea is wrong,” the Granite State Supremes thundered well over a century ago. “It is a monstrous heresy. It is an unsightly and an unhealthy excreascence, deforming the symmetry of the body of the law’.”

Fortunately, modern New Hampshire jurists have left their aggrieved litigants an out. While punitive damages are forbidden, the courts agree that in cases “where the acts complained of were wanton, malicious, or oppressive, the compensatory damages for the resulting actual material loss can be increased to compensate for the vexation and distress caused the plaintiff by the character of defendant’s conduct.”

So if the Littorals sue for trespass, and show that the trespass and subsequent loss of their trees resulted because Wally was a guy who charged ahead fully aware he was in the wrong, their compensatory damages may rise well beyond even what they could get even if the court set the R.S.A. § 277-J:8 multiple at 10 times the market value of the dead wood.

But we’ve still left the question of exactly how much a dead tree is worth, either as marketable timber or for aesthetic purposes. We’ll take up that problem tomorrow.

The trial evidence showed replacement of a 30-inch maple would cost $3,600. Taking this figure and applying a treble multiplier from the tree trespass statute, the court gave Woodburn judgment for $10,805.

Held: In Woodburn I, the Supreme Court held that the trial court’s use of the tree’s replacement cost as the basis for the statutory penalty was wrong. The Court admitted that “in some circumstances replacement cost may be the proper measure of damages for the destruction of a tree.” But the tree trespass statute (then R.S.A. § 539:1, replaced later with R.S.A. § 227-J:8) “takes the value of the tree by itself,” the Court said. The severity of the statutory penalty varies with the productive quality of the tree. Indeed, the whole purpose of the statute is to protect marketable resources.

The Court held “where a tree confers other benefits on the plaintiff in the enjoyment of his property, he may join a count for compensatory damages with his count to recover the statutory penalty. The ordinary measure of damages in these circumstances is the difference between the value of the land before the harm and the value after the harm. In this case the plaintiff introduced evidence of special circumstances which might justify the award of the replacement cost of an eighteen-inch maple.”

On remand, Woodburn’s expert testified that the tree’s value by itself was $2,173. He arrived at this figure by deducting from the tree’s replacement cost the expenses associated with digging, transporting and replanting the tree, resulting in an estimate of the value of the tree itself. The trial court accepted the evidence, and awarded treble the amount as a penalty.

On appeal from the remand, Chapman complained that the base figure from which any statutory penalty is to be calculated must be stumpage value. He argued that the statute is designed to protect marketable timber, and thus only the tree’s value as timber should be used in computing the penalty. Since Woodburn produced no evidence of the tree’s stumpage value, Chapman complained, there can be no recovery under the statute.

The Littorals should have gotten this sign with special wording, “And don’t cut down our trees, Wally, whether they’re dead or not!”

So, the Court said, where the tree is valuable only as timber, stumpage value should be used to assess the penalty. But, “this rule obviously cannot be applied to fruit, shade, and ornamental trees which have a measurable value but no stumpage value.” In this case, the Supreme Court ruled, the trial court “determined the value of the tree by subtracting from its replacement cost the cost associated with digging, transporting and planting the tree. This was an appropriate method of arriving at the ‘value of the tree by itself’.”

Additionally, Woodburn introduced evidence that the tree had special value to the real property as a boundary marker. That, the Supreme Court ruled, warranted the trial court’s award of $577.00 as compensatory damages in addition to the statutory penalty.