A very long-time supporter of ours from New Hampshire wrote us recently to recount the travails of his friends, Larry and Laura Littoral. They keep a cottage on one of New Hampshire’s many delightful ponds. Unfortunately for the Littorals, they have a neighbor, Wally Angler, who is both an avid fisherman and a pain in the fundament.

(These are pseudonyms, of course, and we hope you admire our creativity). 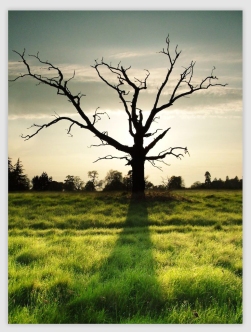 Dead trees are not always eyesores…

Wally has been badgering the Littorals to cut down several dead trees on their land. It’s not that the trees a threat to life and limb (they don’t), but rather Wally believes that if the dead timber falls into the pond, it will provide an excellent habitat for trout (and, in the process, benefit Wally’s favorite pastime). Larry and Laura like their property the way it is, believing that dead standing timber is an important part of the ecology of the place, providing sustenance for woodpeckers, shelter for martens, snow fences in the winter, and beauty for nature lovers.

There are two observations worth making here. The first is, while this may seem counterintuitive, abundant evidence exists suggesting that standing dead timber that otherwise does not pose a hazard to people or property has considerable value to the ecosystem. The second is that even if the standing dead trees are of no value to the woods, the Littorals are creating no risk to anyone by keeping the trees standing on their property, and if they like the denuded trunks where they are, the couple should be entitled to letting the dead trees stand.

Recently, the Littorals enjoyed a weekend getaway. At least, they enjoyed it until they returned to their cottage to find the dead trees mysteriously cut down and lying in the pond. Had Horatio been there, he might have said “O day and night, but this is wondrous strange!” But to the Littorals, unhappy as they were, it didn’t seem strange at all. And they didn’t have to look far for a suspect.

They complained to the local constabulary, who spoke to Wally. He of course denied it, but the Littorals have figured out who Wally hired to cut down the trees, and even deduced that Wally moved the boundary line iron pins to trick the tree service into believing that the trees were Wally’s.

The Littorals are hopping mad, but they don’t want to hang an unsuspecting tree service out to dry. They wonder what action they might have against Wally, and whether the tree service will get nicked in the crossfire. Finally, they note that the local ordinance requires a permit to cut trees within 50 feet of a shoreline, grant of which depends on vegetation remaining or being added to maintain a measured level of trees and ground cover in the area. Unsurprisingly, no one bothered to apply for a permit.

At common law, what we’re looking at here is garden-variety trespass, often called in cases like this “trespass to trees” or “trespass to timber.” It appears, however, that New Hampshire has helpfully reduced the action to statute. Section 227-J:8 of the New Hampshire revised statutes provides that

I.      No person shall negligently cut, fell, destroy, injure, or carry away any tree, timber, log, wood, pole, underwood, or bark which is on the land of another person, or aid in such actions without the permission of that person or the person’s agent.

II.   In addition to any other civil or criminal penalty allowed by law, any person who violates the provisions in paragraph I shall forfeit to the person injured no less than 3 and not more than 10 times the market value of every such tree, timber, log, lumber, wood, pole, underwood, or bark cut, felled, destroyed, injured, or carried away.

Simply put, the Littorals have a nice statutory remedy here. Where most state wrongful cutting statutes provide for treble damages, New Hampshire courts can hammer unlucky defendants for up to 10 times the value of the timber.

What’s more, while the statute on its face seemingly applies only to negligent cutting – not to intentional pure-d mean cutting like what occurred here – New Hampshire appears to apply the statute to any wrongful cutting, employing the 3-10x scale provided by RSA 227-J:8 as an analog punishment gauge, with higher multipliers reserved for more egregious conduct.

The case we look at below involves a New Hampshire timber trespass that exhibited some of the same kind of chutzpah shown by Wally Angler (assuming the Littorals can prove he’s the culprit, which we figure is pretty likely). The brazen willfulness shown by the defendant below – which was not much different from Wally’s intentional trespass – clearly influenced the damages awarded.

Tomorrow, we’ll explore whether the Littorals can bring a common law trespass action in lieu of proceeding under the statute. Then, of course, we’ll have to grapple with the thorny damages question: exactly how much is dead standing timber worth, anyway?

McNamara v. Moses, 146 N.H. 729 (Supreme Ct. N.H. 2001). Marilyn McNamara lived in Eagle Rock Estates, a residential subdivision in Amherst. The subdivision plans show an access to the lot of her neighbor, attorney Bob Moses, as a shared driveway connecting the lot with the street. The driveway is steep and winding, and tough to use during the winter, so since 1977, Bob and other residents have used an unpaved roadway behind the lots, which they call Eagle Rock Drive, for easier access to their lots. Until 1998, everyone believed Eagle Rock Drive was on common land owned by the Eagle Rock Estates Association.

Marilyn tried to get along, giving Bob written permission to use Eagle Rock Drive for the time being but urging him to upgrade his driveway soon, and to begin using it instead. She warned him that she would not agree “to pave the roadway under any conditions.”

In December 1998, Marilyn found one of Bob’s workmen cutting trees along the roadway on her property. The workman said he was preparing the road for further work at Bob’s request. Marilyn told him the property was hers, she had not given permission to cut the trees, and he should stop cutting and leave. When Marilyn’s joint owner, Bill Vargas, met with Moses later that day, Moses said “he owned the road,” and asked, “what are you going to do about it?” Marilyn quickly lawyered up, and told Bob as much in a letter.

The following Sunday, Marilyn and her beau returned from a weekend away (as did Larry and Laura Littoral), to discover that Bob Moses’ contractor had regraded the roadway and widened it by 5 feet. In so doing, Bob’s people cut down at least 12 of Marilyn’s birch and pine trees that did not interfere with passage over the roadway. 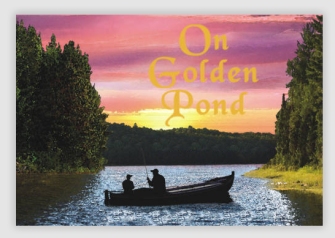 The dead trees are now “in” Golden Pond.

Marilyn sued to enjoin Bob from using Eagle Rock Drive and for damages and penalties for unlawfully cutting her trees. The trial court concluded Bob had a prescriptive easement to use the roadway to access his lot, but held that cutting Marilyn’s trees to widen the roadway had been an unreasonable use of the easement. The court awarded Marilyn compensatory damages of $1,200 – the market value of the trees cut in the widening – and penalties of five times that amount ($6,000) under RSA 227-J:8.

Held: The Supreme Court upheld the damages and penalties.

Bob argued the trial court erred in awarding damages based on speculation or approximation of the value of the trees. The Court rejected the argument, noting that the “speculative” nature in this case was not the prohibited kind, that is, whether a particular loss has been or will be incurred. Instead, the only speculation was how much damage had been caused, that is, the possible valuation of an actual loss.

The trial court awarded compensatory damages of $1,200 for the 12 lost trees, specifically finding that Marilyn’s estimated value of $100 per tree was “reasonable and, if anything, conservative.” The fact that McNamara did not identify each tree by species when testifying as to the average value of the felled trees may have made her showing kind of light, but that “does not render the court’s finding erroneous, particularly in light of the defendants’ decision neither to cross-examine her nor to offer contrary testimony. Finally, the mere fact that the plaintiffs’ estimate of the value of the trees was an approximation is not fatal.”

Bob also contended that the trial court abused its discretion by awarding five times the value of the felled trees as the penalty for violating RSA 227-J:8. The Court suggested that Bob’s own arrogance was an appropriate factor in setting the multiplier:

The record supports the court’s finding that the defendants willfully caused the cutting of trees on the plaintiffs’ property, thereby amply justifying a multiplier at the low end of the range specified in the statute. In particular, in addition to being informed at the May 1998 association meeting that the land in question was owned by the plaintiffs, when questioned as to whose land he thought he had been driving across prior to the meeting, Mr. Moses responded, ‘I didn’t know, other than I knew it wasn’t mine.’ The court’s assessment that the cutting on the plaintiffs’ land was intentional was also supported by testimony that, when [Marilyn’s joint owner] Vargas confronted the defendants on the afternoon of the cutting, their responses were, respectively: ‘what are you going to do about it?’ and a statement that Mrs. Moses would ‘continue the rest of the clearing herself with her own chainsaw.’ Moreover, after having been informed that they did not have permission to clear the land further, the defendants continued the clearing three days later when the plaintiffs were out of town.

The Court also noted that while maintaining the easement by keeping the road free of brush and overhanging limbs was within Bob’s rights, expanding the roadway by five feet was not.