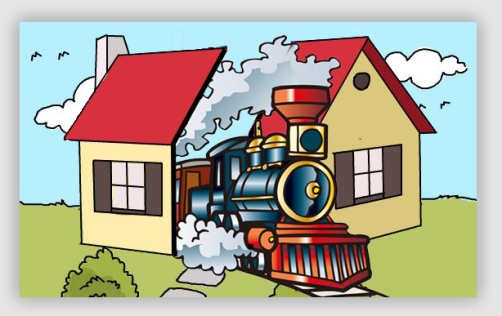 Not with the Internet around. When I was reading today’s case, something caused me to think I remembered an old ditty from Captain Kangaroo about a railroad running through the middle of a house. I’ve recalled it before, thinking about what kind of an ironclad easement must have let the Capital Limited thunder between the sofa and Barcalounger. But I never really knew whether I recalled the song, imagined the song, or made it up one night 60 years ago.

But the Internet never forgets. It only took about 60 seconds to find “The Railroad Runs Through The Middle of the House,” a 1956 hit written by Bob Hilliard and recorded by Rusty Draper and Vaughn Monroe (independently of each other).

To be sure, the song is imprecise. The railroad probably did not buy the land, but instead simply got a right-of-way through the house. The premise is undoubtedly apocryphal, but the nature of a right-of-way – which is an easement on steroids – confuses a lot of people. Just ask the woman in the street who owns the gap of grass between the sidewalk and street (we Midwesterners call it a “tree lawn”).

Most people think the city or county owns it. Not so. The abutting landholder owns to the centerline of the street, subject to the government owning the right-of-way doing pretty much whatever the hell it likes within the right-of-way (consistent with the purpose of the R-O-W).

In today’s case, county employees cut down trees standing in the right-of-way of a road, because overhanging branches were affecting motorists. The landowner complained that those were his trees, and the county had no right to destroy them. Imagine a track crew rolling through your family room and removing a chandelier because it hit the tops of boxcars. That’s how Jeff felt.

Alas, the trees were within the county’s R-O-W, and – while the Court did not state the obvious – overhanging branches interfered with the use for which the R-O-W was granted, which was a highway.

Alberhasky v. Johnson County, 670 N.W.2d 430 (Iowa App. 2003). The owner of property abutting a county road brought an action against the County following removal of trees from his property in order to improve the road right-of-way. The county engineer claimed that the trees formed a canopy over the road that obstructed larger vehicles and kept the dirt road from drying out.

The jury found for Johnson County, and Alberhasky appealed.

Held: The county acted within its rights under Iowa Code § 314.7.

The Court acknowledged that Jeff, as abutting landowner owned the land to the centerline of the road subject to the easement rights of defendant. It agreed that county employees in charge of maintenance work on a county road cannot enter property adjoining the right of way to remove or injure trees located on that property without the landowner’s permission, but they may lawfully remove trees in the right of way or branches of trees that overhang the right of way.

Despite a state policy in favor of trees expressed in Fritz v. Parkison, the facts submitted to the jury established that tree branches regularly struck the equipment used to maintain the road, breaking mirrors, antennas, lights and scraping paint. School buses could not go down the road because tree branches scraped the yellow warning lights off the tops. In one case, a fire truck was unable to use the road, requiring an extra 4-mile trip and resulting in the loss of a building. The trees removed included dead elms, mulberries, cedars and others of varying sizes.

The Court of Appeals held that trimming back the branches offered an inadequate solution, since branches grew back and had to be trimmed frequently. Removal of the trees, it said, was the only long-term solution.