DOING IT ON THE CHEAP

Over the next few days, we’re going to talk about independent contractors in the legal sense. With Uber, Lyft and a host of other “gig” companies around, all of which save money by calling their workers “independent contactors,” the topic is timely. The tree business worries (or should worry) a lot about the status of a worker. A lot of bad things can happen when a worker is misclassified as an independent contractor when he or she is an employee. In the next five days, we’ll try to look at a lot of the pitfalls.

They brought their own gun, transportation, and – in the case of B.A. Baracas – high-class bling. Clearly, the A-Teamers were independent contractors.

The difference between B.A. Baracas and Fred Flintstone is significant and obvious. But that hardly prevents people from calling one the other when the mood strikes them. Some employers think it’s crafty to label their employees as “independent contractors.” It’s irresistible: no tax withholding, no pesky employer matching of social security payments, no unemployment insurance, and no time-and-a-half for overtime. The IRS fights a never-ending battle against this dodge, and even mandates a test to determine whether your worker is a Fred or a B.A.

There are reasons besides taxation for a principal to try to pound a square employee into a round independent contractor hole. Liability and worker’s compensation are two of those. Over the next few days, we’re going to examine the problem of worker classification as it relates to the arboriculture industry. Today, we’re looking in on a real cheapskate, and how his tightfistedness nearly killed a teenage girl.

Penny-pincher Sulcer had a tenant named Quimby. No, not the Mayor of Springfield, but instead a long-haul trucker. The landlord ignored his tenant’s pleas to trim a dangerous tree, until the tree got in the way of the landlord’s plans. Then he told his tenant — a tree-trimming tyro — to trim it for him, for free, of course.

For some unfathomable reason, Quimby did so. Unfortunately, in so doing, Quimby dropped a limb in a freak accident that struck his high school senior daughter Leslie’s chest, requiring emergency open heart surgery to fix. She survived (even marrying lucky young Mr. Allen during the pendency of the litigation). Sulcer argued that he wasn’t at fault, because Quimby was really just an independent contractor, and it was Leslie’s and Quimby’s fault that she stood too close to the tree while Quimby was cutting limbs.

The trial court bought it, but the Court of Appeals — offended, we hope, that the landlord was getting off scot-free — looked at the issue differently. The question, it properly held, was what Sulcer owed Leslie as a tenant, not as a volunteer worker for her volunteer worker tenant Dad. And clearly, he had breached his duty to keep young Leslie safe from the perils of an unskilled tree-cutter. Of course, the Court couldn’t help but notice the report of Leslie’s arborist: he said a professional trimming job would have cost ol’ tightwad Sulcer $300 to $500. The Court didn’t say it, but we think it was a bit disgusted that the landlord was willing to jeopardize the life and health of his tenants for $500.00.

No, not this Quimby – Leslie Quimby …

Allen v. Sulcer, 255 S.W.3d 51 (Tenn.Ct.App., 2007). A landlord told his tenant, Mr. Quimby, to prune large limbs from a tree on the rental property with a chainsaw. The tenant’s 18-year old daughter, Leslie Quimby (now Leslie Allen), was assisting by clearing the limb debris, and suffered an aortic valve rupture and other internal injuries that required emergency open-heart surgery, resulting from the impact of a tree limb that had fallen and ricocheted off the ground, striking her in the chest and chin. At the time of the incident, her father was in an ash tree (about 15 to 20 feet off the ground) in front of his rental house, pruning overgrown limbs with a chainsaw. Ms. Allen was standing in front of the house and assisting her father by clearing the limb debris.

The tenant had previously requested more than once that William E. Sulcer, his landlord who lived 100 yards from the rental house, have the tree pruned. Quimby had voiced his concern that the overgrown limbs, hanging over the house and driveway, would hurt someone. Even though Sulcer had used professional tree services on his farm in the past, he asked Quimby agreed to perform the work because he was tired of the limbs hanging over the house and driveway. Sulcer did not offer to compensate Quimby for his services. Quimby had no training or expertise in pruning or felling trees, or with operating chainsaws, even though he owned one and used it on the limb in question. Sulcer knew Quimby didn’t have experience pruning trees but relied on the fact that Quimby had cut limbs on the property before with no problems. Even so, Quimby had never before trimmed large limbs or climbed into a tree to do so. Other than selecting the limbs, Sulcer provided no other instruction, provided no equipment, and was not present at the time of the injury.

Ms. Allen sued Sulcer, alleging he was negligent as landlord and as the principal of the negligent agent Quimby. She asserted that Sulcer was negligent in instructing her father to undertake such a task, in failing to supervise his activities, and in failing to maintain the leased premises in a safe condition. She argued the negligence of her father should be imputed to Mr. Sulcer under the principles of vicarious liability. Sulcer responded that if there were any relationship between Quimby and himself, it was that of employer and independent contractor. He contended he did not create the alleged dangerous condition and that, if it existed, he had no duty to Ms. Allen because the dangerous condition was known (or should have been known) to her. He argued that, as an employer of an independent contractor, he was not liable for the negligent acts of the contractor, or for injury to the contractor’s helpers. 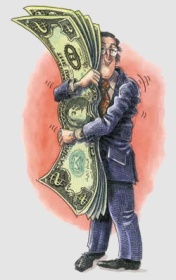 Held: The summary judgment for Sulcer was reversed. The Court observed that a successful negligence claim requires the plaintiff to establish a duty of care owed by the defendant to the plaintiff; conduct by the defendant falling below the applicable standard of care that amounts to a breach of that duty; an injury or loss; causation in fact; and proximate cause. The Court said that although the parties agreed that Quimby acted as an independent contractor on behalf of Sulcer, the facts of the case more directly implicated landlord/tenant law. The trial court had overlooked the fact that Ms. Allen was a tenant of Sulcer and failed to account for the possibility of Sulcer’s negligence as a landlord. Thus, the Court held, the dispositive question was whether Ms. Allen encountered a harm whose foreseeability gave rise to a duty of reasonable care on the part of Mr. Sulcer, the landlord, to protect her from the danger of falling limbs.

This should not be amateur hour … as the penny-pinching landlord found out.

In general, landlords owe a duty of reasonable care to their tenants. When a landlord undertakes to repair or maintain some part of the premises, he owes his tenants a duty to exercise ordinary and reasonable care in seeing the repairs are properly made. In other cases, landlords were held liable for injuries to tenants where they sent unskilled employees to repair units. Here, Sulcer knew that Quimby was unskilled in tree trimming, that he did not want to perform this work, and was afraid of heights. Sulcer didn’t even offer to pay Quimby. He didn’t inquire into safety precautions or any other methods Quimby might use. Sulcer argued he had no duty to Ms. Allen because the danger of falling limbs was open and obvious, and, because the danger was so open and obvious, it was not foreseeable that Quimby would allow her to collect the limbs or be anywhere near the work site. But Tennessee courts have concluded that an open and obvious danger does not automatically result in a finding of no duty and therefore no landowner liability. As in any negligence action, a risk is unreasonable and gives rise to a duty to act with due care if the foreseeable probability and gravity of harm posed by a defendant’s conduct outweigh the burden upon the defendant to engage in alternative conduct that would prevent the harm.

Here, limbs falling from a tree are not so obvious a adnger as to relieve Sulcer of his duty to hire a competent tree trimmer. Sulcer created an unreasonable risk of harm when he asked an unskilled tenant to conduct work that is dangerous. While the force of a falling limb is predictable, its trajectory while falling and after striking the ground is not. This unpredictability makes the risk of injury from a falling limb more salient when unskilled hands attempt the task. The alternatives available to Sulcer, the Court said, ranged from discussing pruning methods to offering assistance to hiring a professional tree trimmer, all of which, to varying degrees, would have materially lowered or eliminated the probability of such harm with very little burden to the defendant. The Court found that Sulcer had a duty to select someone who would know how to minimize the risk of trimming such large branches.