RUNNING AMOK WITH A TRACKHOE

Friday, we began three days down on the farm with Dick Lavy, and his faithful employee, whom we will simply refer to as Sylvester. Now that you’re sitting in your big easy chair, scarfing down leftover Halloween candy, immerse yourself in the story of Farmer Lavy and his faithful sidekick Sylvester.

As you recall, Farmer Lavy told Sylvester to trim the trees along a fencerow that separated one of the Lavy farms (and the opinion suggests Dick Lavy had a lot of farms, e-i-e-i-o) from his neighbor, Jim Brewer.

Sylvester did as he was told, but with a trackhoe instead of a chainsaw. He crawled down the Lavy side of the fencerow, smacking down branches with the trackhoe’s bucket. It was not a pretty job, but it was effective and cheap.

When Jim Brewer sued, Farmer Lavy argued the Massachusetts Rule let him trim overhanging trees any way he liked, Sylvester wasn’t negligent or reckless, and the damage – if there even was damage – didn’t amount to much. The jury mauled Farmer Lavy as badly as his man Sylvester mauled Jim Brewer’s trees, returning a verdict for Jim Brewer in the amount of $148,350.

Yesterday, we watched the Court of Appeals for Darke County, Ohio, fillet Dick Lavy’s argument that the Massachusetts Rule was a license to butcher. The Court affirmed a landowner’s right to trim encroaching trees and roots to the property line, but held that such trimming had to be done in a reasonable manner so as not to injure the adjoining owner’s trees. Today, the Court looks at whether Sylvester acted reasonably in chewing up the fencerow.

What’s interesting about the Court’s analysis is its reliance on expert testimony as to the prevailing custom for fencerow trimming in Darke County, the higher cost of using a chainsaw and bucket truck relative to trackhoes, and the dangers of alternative methods of trimming. As for recklessness, the Court was satisfied to learn that a sheriff’s deputy told Farmer Lavy that his neighbor was unhappy, but Lavy bullheadedly went forward without talking to the neighbor or at least checking with his lawyer to be sure what he was doing was legal. The lesson there is that when you’re on notice but choose to ignore it, you may be judged harshly.

After today’s installment, you’d be reasonable to think that Jim Brewer will probably collect that $148,350 in damages. Tomorrow we’ll finish Brewer v. Dick Lavy Farms, and you may be surprised.

(These facts are repeated from Friday: If you don’t need the refresher, skip to the holding)

The former owner had allowed his neighbor Dick Lavy Farms to farm the property, and the lane had not been used. Brewer cleared the lane of undergrowth in order to access the rest of the property. The lane ran west to east, and had trees on both sides of the lane, with the trees on the south side forming a fencerow between Brewer’s property and land owned by Dick Lavy Farms. The trees in the fencerow were a woodland mix; none of the trees was ornamental or unique.

A trackhoe –  a blunt instrument for tree trimming.

In January 2013, Dick Lavy ordered an employee to clear the fencerow between the two properties. At the time, Lavy understood that he could clear brush straight up and down the property line, and that such clearing was important for crop production, yield and safety for farm equipment. Using a trackhoe, which had an arm that could reach about 15 feet in the air, the employee reached up, grabbed limbs, and pulled on them, trying to break them off cleanly. Although the employee tried to keep the track hoe on DLF’s side of the property, occasionally a branch would snap off or tear the tree on Brewer’s side. Occasionally, a branch would fall on Brewer’s side, and the employee would reach over to grab the branch. Sylvester stated that he never consciously reached over with the bucket to try and break a branch at the tree trunk that was on Brewer’s side of the property.

When Brewer learned that DLF was clearing the fencerow, he went out to look at the operation, and called the sheriff. At that point, the track hoe was about halfway down the fencerow, destroying trees. A Darke County Sheriffs Deputy told Lavy that a complaint had been made, and expressed his concern that civil or criminal issues could be involved in what he was doing. Lavy said that he had a right to take down any branches that were hanging over his property. In addition, Lavy said he would let Brewer remove the branches if Brewer wanted to do so, but he wanted the branches removed before crop season began in March or April.

The deputy told Brewer that Lavy said that he was allowed to take tree branches from his side, and that if Brewer did not like the way he was doing it, Brewer could cut them himself. Brewer told the deputy that he was going to have an expert look at the trees. The deputy filed a report with the prosecutor’s office, but no charges were brought.

Although the deputy suggested that Lavy obtain legal advice before continuing, Lavy continued clearing the fencerow. Knowing that Brewer was upset, Lavy told his employee not to clean up branches that fell on Brewer’s side.

Brewer sued Dick Lavy Farms, alleging a violation of R.C. 901.51, reckless trespass, and negligent trespass. Prior to trial, the court held that Brewer was not limited to damages for diminution in value, and the court would apply a standard that allowed recovery of the costs of restoration.

DLF argued that it had a common law privilege to cut off, destroy, mutilate or otherwise eliminate branches from Brewer’s trees that were overhanging DLF land. The Farm also argued that if it was liable, the proper measure of damages should be the diminution of Brewer’s property value; in the alternative, the court’s holding on the issue of damages was against the manifest weight of the evidence. Finally, DLF claimed it had not negligently or recklessly trespassed on Brewer’s property.

(If you remember the facts from Friday, start here)

Held: Yesterday, we studied the Court’s holding that exercise of the Massachusetts Rule right to trim vegetation that encroaches on an owner’s property is constrained by the requirement that the trimming be done with reasonable care so as not to damage the neighbor’s property.

Today, the Court considered whether DLF had exercised such care, and unsurprisingly found that it did not. 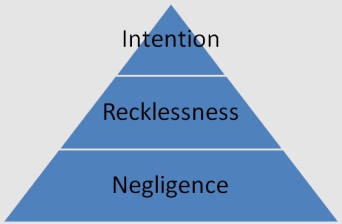 The hierarchy of mens rea.

In his complaint. Brewer claimed a violation of O.R.C. § 901.51, negligent trespass, and reckless trespass. A common-law trespass to real property occurs when a person, without authority or privilege, physically invades or unlawfully enters the private premises of another, causing damage, even insignificant damage. The act of nonconsensual entry may be intentional or negligent.

The Court admitted the case was unusual, because the DLF worker did not actually trespass on Brewer’s land other than when clearing off brush that had fallen or on one occasion when he was lost control the bucket of the trackhoe. In fact, the worker said he never consciously reached over to snap off a branch at the tree trunk that was on Brewer’s property. The action of clearing debris, the Court said, would not have harmed Brewer, but would actually have benefitted him.

The Court said most instances of trespass occur when people enter onto the land of another, cut down, and remove trees. Still, trespasses can result from people setting in motion actions that intrude on another’s land and cause damage. Thus, the liability could still exist even if DLF workers never actually stepped onto Brewer’s property.

The trial court had previously concluded that DLF was negligent by failing to cut or break the trees above its own land, and that DLF breached a duty to ensure that no damage occurred on Brewer’s side of the property line. The trial court discussed two methods of trimming trees, using a track hoe to tear limbs along fences and using a bucket and chain saw, noting that “the more common but dangerous method of lifting a person” with the scoop bucket on a tractor more clearly respects the property line and causes less damage.

To establish actionable negligence, the party seeking recovery must show the existence of a duty, the breach of the duty, and injury resulting from the breach. To get at the duty, the trial court heard from expert witnesses about common practices in Darke County, Ohio, for cutting limbs. Brewer’s expert naturally said that the common practice is to use a chainsaw, hand saw, or pole pruner, but never a trackhoe (which would cause more damage to a tree). The expert estimated the cost of his recommended type of pruning to be about $16,000 for the length of the fence row.

The Court of Appeals concluded that few farmers could afford such an expense for pruning, a finding echoed by a number of farmers DLF called to testify. DLF’s witnesses said the custom in Darke County was to clear fences using a trackhoe or backhoe. DLF’s expert stated that he had farmed in the county for 45 years, and that the common practice for clearing fencerows for the last 15 years had been to use backhoes or trackhoes to tear limbs off overhanging trees. He also named commercial services who used this method. He said that using a bucket truck and chain saw is not common because of cost, as well as the danger it presented.

Arcanum, a small town in Darke County, is the former home of the annual Tour De Donut bicycle race (since moved to larger digs in nearby Troy). In the event, over 2,000 participants race their bicycles from stop to stop, where they see who can eat the most donuts the quickest. You know, Darke County may have its own standard for “recklessness.”

Another Darke County farmer in Darke County testified that the farmers he knows stand in a loader bucket and trim trees using a chain saw, but he admitted the method was dangerous. He admitted he knew no one who used a trackhoe for trimming.

The Court of Appeals said that in light of the record, the trial court’s conclusion DLF was negligent was not erroneous. “Farmers may face difficult choices if the available methods are either too expensive, or risk damage to surrounding property, or risk the farmer’s safety. However, the issue in this case is simply whether the method in question caused unnecessary harm to the adjoining property. In view of the evidence, we cannot conclude that the trial court erred in the standard it applied, nor can we conclude that the court’s finding of negligence was against the manifest weight of the evidence. “

Likewise, the Court denied DLF’s that the trial judge’s finding that it was reckless was against the weight of the evidence. Dick Lavy admitted that sheriff deputies told him that Brewer was unhappy with the trimming, and asked him to stop clearing the neither told tell his employee to stop clearing the line in order to give Brewer a chance to do so, nor did he contact Brewer to discuss the matter. There was no need for speed: Lavy told Deputy Nichols that he wanted to clear the fence row before spring planting, but that was two or three months away.

The Court of Appeals noted that other defendants had been found reckless where their actions, like Dick Lavy’s, continued after they learned of a dispute about the activity. The same, the Court said, was true here.