It is inevitable in the exciting world of statutory construction that defendants and plaintiffs alike will vigorously overreach in applying exceptions that are written into the law until, as judges are wont to say, “the exception swallows the rule.”

I have written before about sovereign immunity and the exceptions to it that must be written into the law in order for people to seek compensation for the negligent misadventures of government employees. The king of those statutes is the Federal Tort Claims Act.

The FTCA permits people to sue the government when its countless officers, agents, departments, bureaus, commissions and assorted employees commit acts of negligence. But there are exceptions, lots of exceptions. The one most often encountered is the discretionary function exception.

An example: If a government employee T-bones you in an intersection because she ignores a red light, obviously you (or your next of kin) want to sue not only her, but also Uncle Sam. You know, respondeat superior, and all of that. Plus, Uncle Sam’s pocket is as deep as pockets get, when it comes time to pay damages.

After all, there’s nothing discretionary about her conduct. Government employee or not, she does not have discretion to ignore a stop light. The FTCA applies. Pretty slam dunk.

But what if the government agency was in the process of deciding, for example, not to inspect trees because of the cost? A tree falls on your car as you pass through the intersection, a tree that was rotten to the core but which the agency had done nothing about, because its policy was not to inspect its trees? There, the decision not to inspect was a discretionary one, a matter of government policy. In that case, the FTCA would consider you to be out of luck.

Voila! Like that, the blown traffic light becomes a discretionary act, and you recover nothing. The discretionary function encompasses absolutely everything the agency does, and exception has successfully swallowed the rule. 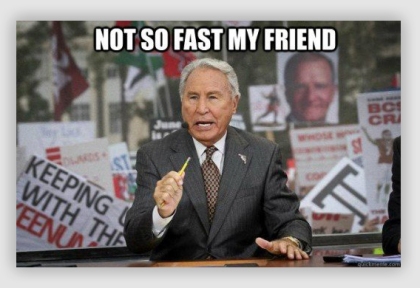 The government was well on its way to doing just that last week, denying the parents of a dead teenager any compensation for the collapse of a tree limb, by making a failed tree inspection into a discretionary function, when the U.S. Court of Appeals for the Ninth Circuit said, “Not so fast!”

Just because there may be a choice, the Court held in so many words, does not mean that there has been a discretionary function.

The Kims and Justin Lee’s parents sued under the Federal Tort Claims Act, alleging that National Park Service officials were responsible for the accident. The families raised wrongful death and negligent infliction of emotional distress claims. The complaint also alleged that Park officials fraudulently concealed information about the danger posed by the tree so that campers would continue to patronize the campground.

The Park Service moved to dismiss the lawsuit, arguing that the FTCA did not apply because of the discretionary function exception, which bars tort claims against the United States based upon the exercise or failure to exercise a discretionary function or duty. After reviewing the Park Service’s local policies regarding tree maintenance, the district court found that decisions regarding “how to evaluate and respond to tree hazards” were subject to the discretion of Park officials. The court dismissed the complaint.

The families appealed to the U.S. Court of Appeals for the Ninth Circuit.

The FTCA is the only means of suing the United States, its agencies or employees for actions or omissions that constitute a tort. It is limited as to the kind of tort that he asserted, strict in the filing deadlines is imposes on plaintiffs, and fraught with pitfalls as to whether the tort – even if a permitted action and even if timely brought – can apply to the conduct in question.

Determining whether the complained-of negligence related to a mandatory or a discretionary duty is difficult. Courts evaluate the FTCA discretionary function exception in two steps. First, the court must determine whether the challenged actions involve an element of judgment or choice. Second, if the actions do involve an element of judgment, the court must determine whether that judgment is of the kind that the discretionary function exception was designed to shield, namely, only governmental actions and decisions based on considerations of public policy. The relevant choice must be susceptible to some consideration of social, economic, or political policy.

Once the Park Service actually inspected the trees in the campground, the Court said, Park officials were required to do so in accordance with their established policies. Yosemite Park Directive No. 25 set forth the Park’s “Hazard Tree Management” program and, among other things, it specifies how Park officials are to evaluate the risk posed by trees they inspect. Yosemite used the “‘Seven-Point’ (Mills and Russel 1980) system, a professionally recognized, documented and quantified hazard tree rating system.” The system includes a “Total Hazard Rating” (ranging from two to seven) that combines a “Defect Rating” based on the tree’s potential for physical failure and a “Target Rating” based on the potential impact in the event of a failure. The system provides specific criteria for how to rate each component based on the tree’s visible features and the nature of the surrounding area. Trees with a total rating of five or higher are considered “high” risks and, according to the Park Service plan, “will require some type of abatement/mitigation.”

Once the Park officials used their discretion to adopt the Seven-Point system instead of some other method for evaluating trees, there was no discretion whether the Seven-Point system had to be properly followed. But the Park Service had a final “Hail Mary” to throw. It claimed that its implementation of the rating system is shielded by the discretionary function exception because the system itself requires officials to consider questions of public policy.

The Court rejected this argument, too. “The government appears to conflate policy considerations with technical considerations,” the Court said. “Matters of scientific and professional judgment — particularly judgments concerning safety — are rarely considered to be susceptible to social, economic, or political policy.” And scientific and professional judgment, the Court ruled, “is all the Park’s rating-system requires. The system directs officials to assign certain hazard ratings based on a tree’s structural defects and its likelihood of damaging various Park features… Certainly, the system requires the careful — perhaps even difficult — application of specialized knowledge… The mere fact that experts might reach different conclusions when conducting a technical analysis does not mean that the analysis somehow turns on questions of public policy. Even if the Seven-Point system requires officials to make difficult choices, it still does not ask them to make policy choices and it does not afford them an opportunity to rate a tree based on their social, economic, or political views.”