THE LAW OF UNINTENDED CONSEQUENCES – PART 1

the neighbor, though without right of appeal to the courts if harm results to him, is, nevertheless, not without remedy. His right to cut off the intruding boughs and roots is well recognized [and] in his own hands. The common sense of the common law has recognized that it is wiser to leave the individual to protect himself, if harm results to him from this exercise of another’s right to use his property in a reasonable way, than to subject that other to the annoyance, and the public to the burden, of actions at law, which would be likely to be innumerable and, in many instances, purely vexatious.

But it’s always been a little puzzling to me. When your tree overhangs a neighbor’s property, does “harm” have to “result[] to him” before a self-help remedy is permissible? What if you just don’t like those big honking’ branches overhanging your yard, leaving your prize roses in the shade? Or they sway in a stiff breeze, turning on your back yard motion-detecting spotlight?

The Massachusetts Rule seems to suggest that if the tree isn’t causing “sensible harm,” you can’t touch it.

Sensible harm? What might that be?  I have a beautiful oak tree standing in the corner of my property. Some of the branches hang over the backyard of my neighbor, a guy who is truly a prince of good humor. In the autumn, my oak leaves fill every inch of his yard (downwind from mine) to a depth of nearly a foot. It seems pretty clear to me that if my neighbor decided to trim back my oak to the property line, I could hardly complain.

But I also have a pair of pines trees which soar majestically, extending nearly half of their branches over the fence and into my other neighbor’s airspace. They drop nothing to speak of, and really cause him no problems whatsoever. Does the Massachusetts Rule extend to him, too, and permit him to lop off the overhanging branches (and thus ruin my trees’ symmetry), simply because the branches hang over some of his lawn? 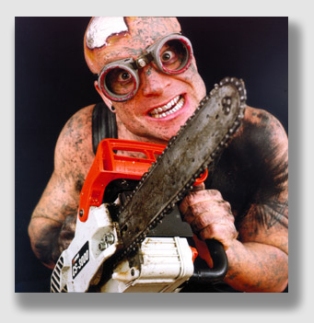 I like my neighbors, and I am not about to explore the nuances of the Massachusetts Rule against them in the local court of common pleas. But, as we can see in today’s case, there are those who are willing to do so, and who have read the Massachusetts Rule’s “if harm results to him…” language as being a hard requirement that harm must result to a neighboring landowner before he or she can oil up the chainsaw and address the overhanging problem.

For their benefit, Pennsylvania courts went out on a limb 25 years ago, and applied the law of trespass to overhanging branches and encroaching roots. Today, we’ll read about how the theory came to be applied. Monday, we consider a case where a crafty lawyer took the trespass theory (and an ill-advised piece of dictum from today’s case), and tried to spin it towards its obvious conclusion.

Jones v. Wagner, 425 Pa.Super. 102, 624 A.2d 166 (Pa.Super. 1993). The Joneses and Wagners are adjoining landowners, with a fence separating their properties. The Joneses own a row of tall hemlock trees. While they were on vacation, the Wagners trimmed the branches of the trees to the extent that the branches hung over the boundary line separating the neighbors’ property. The Joneses sued, demanding that the Wagners pay them replacement value of each of the 26 trees which line the boundary, about $31,000.

The Joneses’ theory was novel. They claimed the Wagners owed them damages because the trees they trimmed were not harming them. They argued that even under the Massachusetts Rule, a landowner is only allowed trim branches and roots to the property line – that is, exercise a self-help remedy – if the overhanging branches or roots are causing him sensible harm beyond the occasional shedding of leaves and twigs. Because the trees were not doing so, the Joneses claim, the Wagners’ trimming was pursuit of a remedy without a right, and made the Wagners liable for damages.

The trial judge was having none of it, and held that the Joneses had no cause of action. He dismissed their complaint with prejudice, and they appealed.

Held: The self-help remedy available under the Massachusetts Rule does not require prior injury to the landowner availing himself or herself of the remedy.

While, the Court admitted, there does exist some conflict regarding when a landowner may institute an action for injunctive or monetary relief against an adjoining landowner whose trees overhang the property line, one common thread connects all such cases: the landowner whose land is encroached by the overhanging branches may trim the limbs to the extent of the encroachment. The Court noted another decision that said, “The cases are in agreement that trees ordinarily aren’t nuisances; that overhanging branches which merely cast shade or drop leaves on the land are not nuisances; that if under any circumstances overhanging branches or protruding roots do constitute a nuisance it is only when they do sensible or substantial harm; and that, whether nuisances or not, a landowner may always cut away to his property line branches and roots from trees of the adjoining owner.”

(Note: “Sensible harm” appears to be a term used nowhere in law except with respect to tree encroachment, and has nowhere been defined.  The ten cases or so in which the term appears all seem to assume the reader knows what it is, apparently “harm that can be sensed.”  The question as to its meaning reminds of Supreme Court Justice Potter Stewart’s famous riff on the meaning of obscenity, in Jacobellis v. Ohio: “I shall not today attempt further to define the kinds of material I understand to be embraced within that shorthand description; and perhaps I could never succeed in intelligibly doing so. But I know it when I see it…”  So what is “sensible harm?” You’ll probably know it when you see it.)

The Joneses’ contention that the Wagners had to suffer “sensible harm” before availing themselves of the Massachusetts Rule remedy “is only relevant if the appellees seek their remedy in a court of law or equity,” the Court ruled. “A showing that encroaching tree limbs, branches, or roots have caused sensible damage is not a pre-condition to exercising a self-help remedy.”

It is an ancient principle of law, the Court said, that a landowner has the exclusive right to the space above the surface of his or her property, owning everything above and below ground level to an indefinite extent. On the same principle, courts have held that tree branches extending over adjoining land constitute a nuisance – at least in the sense that the landowner encroached on may himself cut off the offending growth.

But whether a suit for injunction and damages may be maintained without proof of actual damage is a point upon which the authorities have not been clear. In some other jurisdictions, damage caused by encroaching branches and roots are never actionable, self-help being the landowner’s only remedy. This is the “Massachusetts Rule.” Others require proof of some “sensible or substantial” damage before an action for damages in trespass are available, while some jurisdictions allow both actions at law and at equity upon this showing. Hawaii allows an action upon a showing of actual damage or upon “imminent danger” of damage (known in the tree law world as the “Hawaii Rule“). Finally, some jurisdictions hold that proof of damage only determines the amount of damages recoverable, and not whether a cause of action exists. These jurisdictions, however, are ones in which statutes, not common law, recognize the existence of the cause of action.

The Court said it is fundamental that a landowner has a cause of action against any person who has committed a trespass upon his or her lands, and it is not necessary for the landowner to allege any actual damage as an element of the cause of action. This is because the harm is not to the physical wellbeing of the land, but rather to the landowner’s right to peaceably enjoy full, exclusive use of his or her property. In fact, there is a property right in the airspace above the land, which may be invaded by overhanging structures, or telephone wires, by thrusting an arm above the boundary line, or by shooting across the land, even though the bullets hit the surface. Thus, the Court observed, an aggrieved landowner has a cause of action against an adjoining landowner whose trees overhang the boundary line. Otherwise, his or her right to enjoy exclusive peaceable use of the property is diminished.

The continuing presence of the branches and trees overhanging property lines indicates that the nature of the relief afforded to the aggrieved landowner is not simply monetary. The Restatement notes that a continuing trespass is committed by the “continued presence of a structure, chattel, or other thing which the actor has tortiously placed there, whether or not the actor has the ability to remove it.”

A trespass occurs by a mere overhang. Furthermore, given the rather unremarkable observation that trees will tend to grow, the trespass, even if remedied once, is bound to recur just as soon as the trees or shrubbery regenerate. Thus, the trespass is “continuing” and the possessor of land is entitled to pursue a proper remedy.

We are convinced, the Court ruled, that Pennsylvania law “entitles a landowner to protect his property interest by maintaining an action to compel a person who has caused a trespass to remove it.” It is not suggested anywhere that a showing of harm is a prerequisite to recovering in trespass. A landowner may avail himself or herself of every available remedial avenue in an effort to protect the incidents of land ownership. “Anything less, in our view,” the Court said, “is a travesty.”

Thus, the Court concluded that Pennsylvania law affords a full panoply of remedies to a landowner whose property is encroached by overhanging branches or tree limbs (thus following the Hawaii Rule):

• First, an aggrieved landowner may exercise a self-help remedy by either trimming or lopping off the branches to the extent his or her property is encroached;

• Second, if the landowner has incurred reasonable expenses in the course of exercising a self-help remedy, he or she may recoup those expenses from the trespasser; or

• Third, he may, on a trespass theory, seek a court order compelling the trespassing neighbor to remove the trees to the extent of the encroachment and seek appropriate money damages.

Pennsylvania law requires no showing of physical harm or damage to the land before a landowner can enforce his or her right to freely enjoy unencumbered and exclusive use of property he rightfully possesses. The mere “tree trespass” is enough.

The Wagners were only exercising their right to trim the branches and limbs of the Joneses’ encroaching trees. They may not be held liable for doing so.