Trust an angry plaintiff and a clever lawyer to stretch a useful concept like “spite fence” – which we have been talking about the last few days – like a salt water taffy pull.

It was probably inevitable that someone would go after a neighbor for planting plants that may someday be too tall. Add a complaint that the neighbor refused to knuckle under when the plaintiff tried to boss him and her around regarding their landscaping, and, voilà, you have malice.

Just as the cops in Minority Report arrested people who would someday commit a crime (surely a useful idea), this theory holds people liable because their plantings might someday be a natural spite fence.

Fortunately, the Mississippi courts that heard this one all made short work of it.

Blackwell v. Lucas, 271 So. 3d 638 (Ct. App. Mississippi, Nov. 20, 2018): The Lucases planted some plants and shrubs in the front yard of their Ocean Springs, Mississippi, home. The Blackwells believed that if allowed to grow, the plants and shrubs would at some indeterminate time in the future block their view of the ocean, the sunsets and the beautiful areas normally and typically available to property owners in the Oak Bluff Subdivision. 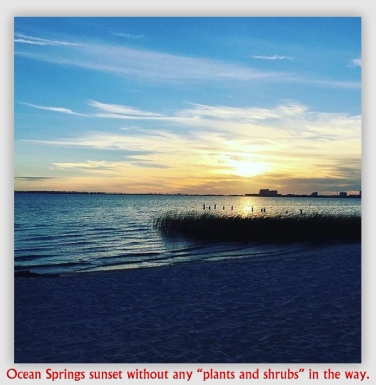 Thus, the Blackwells asked the Lucases to remove the plants and shrubs or to retard their growth so that their view of the ocean and surrounding area would not be impaired. The Lucases, being your average reasonable American homeowners, declined courteously.

Actually, it may not have been “courteously.” The Blackwells argued that the Lucases were being mean: “The shrubs and plants installed by Mr. & Mrs. Lucas have no beneficial use and were installed and maintained by them for the purpose of annoying the Blackwells and preventing them from enjoying their property.”

The Blackwells, also being your all-too-common American homeowners, sued the Lucases for planting shrubs that “will unreasonably block the view of the Blackwells.” The term “unreasonably,” in this case, apparently meant anything that might alter the status quo in any manner the Blackwells found objectionable: “The actions of Mr. & Mrs. Lucas,” the Blackwell’s complaint alleged, “amounts [sic] to and/or equates [sic] to an invasion of the Blackwells’ interest in the use and enjoyment of their land and the invasion is intentional and unreasonable or negligent.”

Strong words, indeed! But the trial court was unimpressed, and tossed the suit out on its ear. Not taking the hint, the Blackwells appealed.

The Blackwells had no common law or statutory right to an unobstructed view across the Lucases’ property, nor did they have a right to dictate the type or placement of the Lucases’ plants and shrubs. The Blackwell complaint failed to state a cause of action for a nuisance, or allege any present injury or an imminent threat of irreparable harm for which there was no adequate remedy at law.

The Court of Appeals observed that a cause of action arises out of a pre-existing primary legal right with which the law invests a person The right to maintain an action depends upon the existence of a cause of action which involves a combination of a right on the part of the plaintiff and the violation of such right by the defendant. Thus, the existence of a legal right is an essential element of a cause of action, inasmuch as a plaintiff must recover on the strength of his own case instead of on the weakness of the defendant’s case. It is the plaintiff’s right, not the the defendant’s wrongdoing, that is the basis of recovery.

That right or duty must be a legal right or duty, and not a mere moral obligation which is enforceable neither in law or in equity.

Applying the general notion to this case, the Court of Appeals observed that property owners have a legal right to cut and remove any part of a plant or shrub that grows on or overhangs their property. They have a legal right to sue to abate a nuisance. But that’s Property owners have no legally cognizable right to a view across their neighbors’ property. Nor do they have a right to dictate the type or placement of the neighbors’ shrubs.

The shrubs were not a nuisance. The Lucases would be subject to liability for a private nuisance only if their conduct is a legal cause of an invasion of the Blackwells’ interest in the private use and enjoyment of land. Again, without a legal right to a view across the property, there simply is no such interest to be invaded.

But the Blackwells tried to bootstrap their claim into a “spite fence” argument. They argued that the plants and shrubs would someday obstruct their view, and this fact gave them a viable cause of action for a “spite fence” nuisance.

The Court of Appeals held that the Blackwells’ “spite fence” claim had no basis in Mississippi law. Because the one Mississippi case on “spite febces” was decided by an evenly divided Court, “there is still no precedent for such a claim under Mississippi law. Moreover, we decline to recognize a new cause of action for a “spite fence” in a case that does not even involve a fence,” but instead only “some unspecified ‘plants and shrubs’ that, “[i]f allowed to grow,” allegedly may obstruct the Blackwells’ view.