YOU’LL POKE YOUR EYE OUT 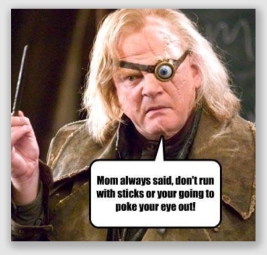 Every adult can recite the many and varied warnings and admonitions we heard from parents when we were kids. Among them were “you’ll catch your death of cold,” “clean up your plate, because there are starving kids in India/China/Africa.” We imagine Momma Cuomo telling a young Andy to “keep your hands to yourself.” Good advice that can save you headaches later.

And, of course, there’s that Christmas Story classic, “you’ll shoot your eye out.”

Today’s case is about Peter Robles, a kid who didn’t shoot his eye, but did poke it out.. Petey, an impetuous 3-year old, ran straight into a very sharp palm frond while playing in the Severyn family’s yard next door to his house.

We remember when the neighbor kid climbed our magnolia tree once while it was raining. (We, or maybe our mother, had enough sense that we were kept indoors, out of the rain). The neighbor kid lost his footing on a slippery bough, fell, and whacked his chin on the branch as he went past headed for the ground. Even then, the law of gravity was in force.

The neighbor boy showed up the next day with stitches, and haughtily told us that his parents were going to sue our parents. Not really understanding the law, we had visions of losing out house, car and toys, and being reduced to panhandling on the village square. Had we really appreciated the law, we would not have been scared. We would have been petrified.

In today’s case, the toddler’s parents really did sue, complaining that the palm trees were a “hidden peril” in the neighbor’s property, and that he had thus breached his duty to little Peter. The Robles said the little boy was an “invited guest,” and thus the Severyns had a duty to warn the kid about the hidden dangers of sharp palm fronds.

The Court of Appeals disagreed, patiently explaining to a lawyer who may weak have slept through the first year of law school  the how the status of the person on the landowner’s property determines the duty of care the owner owes. The Court quite reasonably found that the palm trees were anything but “hidden.” Even if the Severyns had been sloppy in trimming the palm tree – something that had not been established – the negligent trimming did not make the trees appear deceptively safe. Even Petey’s dad had told the boy to be careful when playing at the Severyns (as if we didn’t have that warning go in one ear and out the other countless times during our youth).

Sure the boy was only 3 years old, the Court said, but even taking his tender age into account, the Severyns did not owe him a duty greater than the one they discharged toward him.

We have railed about it before, the American perception that once a victim has been injured, a jury is duty bound to look around the courtroom for someone who should be made to pay for it. There’s no discounting the sadness of seeing someone accidentally killed or maimed for life, but as President Jimmy Carter has pointed out, life is often unfair.

Robles v. Severyn, 504 P.2d 1284, 19 Ariz. App. 61 (Ct.App. Ariz. 1973). Peter Robles, a 3-½ year old, was playing at a neighbor’s house with permission, when he somehow impaled his left eye with a sharp palm frond. No one saw the accident, but the boys had been playing among the trees when it happened. The palms were in a row alongside a fence at the border of the Severyns’ property, with short, squat trunks and narrow, long fan leaves.

Peter’s parents sued the Severyns to recover for injuries Peter suffered as a result of a “sharp palm frond penetrating his left eye” while he was playing on the Severyn property as an “invited guest.” The complaint alleged that the palm trees “had a misleading hidden and dangerous defect to a child of tender years, which danger defendants had specific knowledge of,” and that it “constituted a hidden trap to children playing in the area.”

Held: Dismissal was proper. A landowner’s duty to a person on his property is determined by that person’s status. The evidence shows that young Peter was a social guest. In Arizona, a social guest is not an invitee but merely a licensee despite the fact that he is on the premises pursuant to an invitation from one in possession. The general rule is that one who goes upon another’s property as a gratuitous licensee must take it in the condition he finds it and must assume all risks incidental to such condition. This rule applies to children as well as adults, and to natural as well as artificial conditions. The owners of the premises owe no duty to a guest other than to refrain from knowingly letting him or her run upon a hidden peril, or wantonly or willfully causing the guest harm. However, the rule is that a host who knows of a concealed danger upon the premises is guilty of negligence if he permits the guest, unwarned of the peril, to come into contact with that danger, and he may be held liable to the guest for an injury thus sustained.

Palm trees can provide the unsuspecting with an unpleasant time.

The Court held that the “hidden peril” doctrine did not apply. The trees were neither hidden nor did they have a deceptive quality. The accident occurred during daylight hours and the trees were clearly visible. Peter had been cautioned by his father before to be careful playing. The Court said that even if it assumed that the Severyns were negligent in failing to trim the branches, such a failure did not give the trees a deceptive or innocent appearance. If a dangerous condition existed, the Court held, it was an obvious one, and the Severyns thus had no duty to warn. The Robles stressed Peter’s age, arguing that a 3-year old child could not have realized that these trees were dangerous. While the Court admitted that was true, it did not believe that “all circumstances giving rise to a possible danger to a child create a factual question as to whether a ‘hidden danger’ exists. One would have to ‘childproof’ his property if such were the case.”

The Court ruled that while the care to be taken by the owner or occupant must be commensurate with the danger to, and with the immaturity and inexperience of, the child to be protected, any requirement in this respect must not be so onerous as to make the ownership or possession of property burdensome instead of enjoyable. The use of property should not be burdened with the need to take precautions against every conceivable danger to which an irrepressible spirit of adventure may lead a child. There is no duty to take precautions where to do so would be impracticable, unreasonable, or intolerable.