No danger trees in the middle of the woods…

In the tree world, a danger tree is generally defined as a tree that (1) is diseased, decayed or injured; and (2) is located in a place where it can hurt people or property if it falls. A dead tree standing in the middle of Winnie the Pooh’s Hundred-Acre Wood is not a danger tree, because if it falls, it won’t hit Pooh’s house or Christopher Robin.

Naturally, this leads to plenty of tension. It’s simple math for the utility: if the tree is within x feet of a conductor, it comes down. To the landowner who waxes rhapsodic about his or her silver maple, there’s no justification for removing a healthy, beautiful hardwood just because of where it is standing.

Our sorry plaintiffs today, the Raglands, found out the power company was clearing its right-of-way, and demanded that that the utility negotiate with them about leaving some beloved pines. The power company didn’t bother, but instead came through with chainsaws a–buzzing, and removed every tree within 5 feet of a conductor. That was the company’s standard. When the Raglands sued, they hired an expert who testified that the trees removed were young, healthy, and posed no risk to the power lines.

Especially in the Internet age (which started after this case was decided), there’s no excuse for failing to check out your expert. The unsuspecting Raglands had hired a guy who used to work for Alabama Power Company. When he did, he based his opinion solely on height, the standard the power company used.

After the expert’s past conspired to kneecap his testimony, the Supreme Court of Alabama held that the beauty of Alabama Power’s standard was that it was so easy to use. If you use the Raglands’ proposal to measure age, health, size and some mushy opinion testimony on how likely the tree was to fall on power lines, there would be no end to litigation. No one wanted that (except for the lawyers, of course, who slobber at the thought like Pavlov’s dogs at the sound of the bell). The power company’s simple distance-to-conductor standard was easy for homeowners and utilities to understand and apply.

The power company’s trimming of Raglands’ trees based on distance-to-conductor was held to be proper.

Alabama Power Co. v. Ragland, 406 So.2d 363 (Sup.Ct. Ala. 1981). The Raglands had a two-acre plot near Bessemer next to land on which Alabama Power had a right-of-way and on which it ran three high-voltage transmission lines, the closest of which was only a few feet from the Raglands’ property. When building his house, Mr. Ragland left standing some pine trees that blocked the view of the power lines from his house. Alabama Power gave him notice that the company would be cutting trees along its right-of-way.

Mr. Ragland called an attorney, who told him to have the Alabama Power call him before cutting the trees. Alabama Power did not, but instead proceeded to cut down 15 trees and top two others. Ragland sued Alabama Power for trespass.

After the trees were cut, Mr. Ragland hired a forester who inspected the stumps and other conditions about the Raglands’ property. He testified that these trees did not pose a concrete threat of injury to the transmission lines. But the forester also had worked for Alabama Power, and when he did, he considered height almost exclusively. When working for the Raglands, he also considered health of the trees, neighboring trees, and weather conditions. 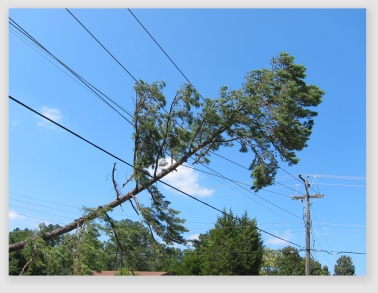 Danger tree? This one qualifies by anyone’s standard.

Alabama Power’s standards for clearing trees along transmission lines were to cut any tree that would fall within five feet of the nearest conductor. Alabama Power’s 1975 records showed 1,807 tree-caused outages on 5,000 miles of distribution lines and five tree-caused outages on 500 miles of transmission lines. Nevertheless, the trial court found for Ragland, holding that Alabama Power had not shown the trees it removed were “danger trees.”

Held: The Supreme Court reversed. It found that if Alabama Power had to make a tree-by-tree determination of “concrete threat of injury” based on the health of the tree and other arguable factors, the efficiency of tree-clearing operations would be substantially reduced and outages would probably increase. Alabama Power would also be subject to suit from any disgruntled property owner who does not agree that his trees pose a threat to neighboring lines.

On the other hand, if Alabama Power continued using its 5-foot rule, property owners would have a definite standard by which to trim their trees. Thus, the trial court’s jury instruction defining “danger trees” as trees which by reason of size or condition and contiguity to power company right-of-way involved a concrete threat of injury to power company transmission lines placed too great a burden of proof on the power company, which had a right and authority to remove trees outside of its right-of-way as might injure or endanger by shading, falling or otherwise any of its works.

Alabama Power thus could properly rely on its 5-foot rule, which allowed it to cut any tree that would fall within five feet of the nearest conductor.