America has to love this story. It has heroics, action, danger – and an O. Henry twist at the end.

A few years ago, in beautiful Snoqualmie Pass, Washington, truck driver Tequila Isaacson stopped at a rest area to use the facilities. As she returned from the restroom, she saw a family desperately trying to rescue their child from a burning pickup truck.

No worms in this Tequila: she leaped into action, and raced over to the glass front door of a coffee shop. The café was closed, but – seeing a fire extinguisher hanging inside – Tequila smashed the glass, seized the red canister, and knocked back the fire.

The fire was extinguished, the child was saved, and Tequila was a heroine.

But then the Washington State Police showed up. Tequila explained what she did to help save the boy and put out the fire. When she reported how she broke down the coffee shop door to grab the fire extinguisher, the Trooper said, “Oooooh, Tequila!” He told her that using the fire extinguisher without permission is theft no matter how good her intentions. The cop said, “Your choice is fix the window or, Tequila, slammer!”

Fortunately for Tequila, God and Al Gore created the Internet, and social media went wild in her defense. But the whole kerfuffle set us to wondering. Could the cop be right? Or course, Mom told us when we were young that the policeman was our friend, and that suggests that he would never mislead us. But then, we also recall law school, where a professor suggested to us that the policeman was not always our friend, and certainly was not always right.

So the following day, will Tequila see the sun rise as a burglar or a hero? That depends, of course, on the law. 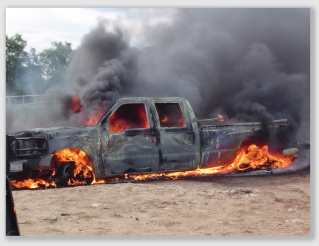 Is getting the kid out more important than a broken window?

If you cannot believe that the law is such an ass as to punish someone in Tequila’s position, you’re largely right. Flood waters are rising, so you take that old boat parked in the neighbor’s back yard in order to save Grandma. You commandeer a soccer mom’s SUV to get an injured kid to the hospital. You knock a tainted burrito out of the hands of a Chipotle patron before she can take a deadly bite. At common law (and in many states), you have an affirmative defense to the crimes you committed – trespass, theft, even assault – because it was necessary to serve some greater good.

But consider the standard for a necessity defense, described in the case below. Did Tequila reasonably believe that breaking the coffee shop window was necessary to avoid harm to others? The young boy at risk of becoming a krispy kiddie probably thought so. His parents undoubtedly thought so. And what’s worse, a kid burning to death or a broken window and discharged fire extinguisher? That’s not a hard one, either. Finally, did any legal alternative exist? Tequila said she looked for a fire extinguisher but found nothing besides the one behind the locked door.

If the cop had been successful in finding a prosecutor who didn’t care about keeping his or her job, maybe Tequila would have been charged. But if she had been, the jury would not even have to leave the box to acquit. The necessity defense and common sense would carry the day.

And it apparently did, as a pro-cop website, Blue Lives Matter, reported that Tequila would not be charged. The site explained that the Washington State Trooper simply was not familiar with burglaries, being a “highway patrol agency” (we derisively call them the “misdemeanor police” where we live). The author opines that “through no fault of his own, this trooper was likely completely unfamiliar with criminal law surrounding burglaries.”

The Trooper’s ignorance, of course, did not keep him from throwing his weight around. Thanks to social media, the Washington State Patrol “will be reviewing the way this case was handled with the trooper, adding they are grateful for Isaacson’s courageous effort to help save the child.” That’s code, meaning “the Trooper is going to get his butt chewed” for his sin, which was making his employer look bad.

But within a month or two, Linda began walking the dogs several times a day of her own accord, sometimes late at night or in heavy rain. Linda let herself into the garage at all hours to check on the dogs and leave notes regarding what she believed was proper care for them. She even replaced the dogs’ collars with collars that had her own name and phone number instead of the Scotts’.

The Scotts were a little creeped out, and Frank told her that her services were no longer required. Linda did not take it well, telling Frank that he would regret firing her. The Scotts told the sheriff, and a deputy went to Linda’s place to tell her to stay away.

One day the dogs disappeared. The crime hardly required Sherlock Holmes. After receiving a report that a local citizen had seen Linda with Ellie and Zalo that morning, a deputy went to her house. Linda denied everything, but when he told Linda that Zalo had not had his medication that day, Clark admitted she had the dogs.

The State charged Linda with second-degree burglary. Linda wanted to raise a necessity defense, on the grounds that she took the dogs because she believed the Scotts were not taking good care of them. The trial court ruled that she could request a necessity instruction if the evidence supported it.

At the end of the trial, Linda’s lawyer did not ask for the instruction because he believed it “would be a frivolous motion, frankly, at this point.” A jury convicted her.

Linda filed a motion complaining that her lawyer rendered ineffective assistance during the trial for not asking for a necessity defense instruction.

Held: Linda’s lawyer was right. The court observed that “necessity” is a common-law defense with limited application, a defense “available to a defendant when the physical forces of nature or the pressure of circumstances cause the accused to take unlawful action to avoid a harm which social policy deems greater than the harm resulting from a violation of the law.”

A defendant, however, has to produce some evidence to support the defense before a court will give the instruction to the jury. In order to sustain a necessity defense, the defendant must show by a preponderance of the evidence that (1) he or she reasonably believed the commission of the crime was necessary to avoid or minimize a harm, (2) the harm sought to be avoided was greater than the harm resulting from a violation of the law, and (3) no legal alternative existed.

All Linda had was her own opinion that the Scotts did not take proper care of Ellie and Zalo the way she would have preferred. Because she did not testify in her own defense – probably a good idea, given how rickety her case was – nothing in the record supported a necessity defense.