YEAH, WELL, THEY WERE UGLY TREES… 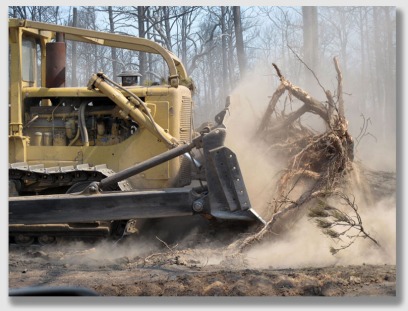 When the contractor building an interstate highway interchange needed some space to park bulldozers, the state highway department asked Mr. Baillon for an easement.  Being justly proud of his scrubby little trees and stunted bushes, he refused.

But he won what?  The trial court judged his damages by the diminution in value of his land.  That is, how much less is the scrawny strip of real estate worth with the scrub trees gone?  Not much, the Court said, giving Mr. Baillon just $500.00.

Mr. Baillon appealed.  He argued he had wanted the trees and bushes as a sound barrier between himself and the road.  Also, he should have gotten treble damages because of the intentional trespass.

The appeals court sort of agreed.  It held that the measure of damages for the loss of trees — because they weren’t particularly desirable as shade trees or ornamental trees — was reduction value of the real estate.  Clearly, however, treble damages should be assessed under Minnesota Statute 561.04, Minnesota’s wrongful cutting statute, because the trespass was anything but casual.

This type of damage calculation, well known to contract law students who read Peevyhouse v. Garland Coal Co., is intended to avoid economic waste.  The thinking is that the courts won’t order restoration of the property if the cost exceeds the reduction in value by the conduct.  But at what price to freedom?  Mr. Baillon didn’t want to sell his property, he wanted his trees, pathetic though they might be.  The fact that the marketplace might not share his desires shouldn’t matter all that much: it was his land, and he should be able — within broad parameters — to keep it as he likes.  Letting the bulldozer operator off the hook for the intentional trespass by not requiring that the land be restored to what it looked like before the trespass, even if that cost ten times the difference in real property value, seems to us to accord Mr. Baillon’s rights the respect they deserve.

Baillon v. Carl Bolander & Sons Co., 306 Minn. 155, 235 N.W.2d 613 (Sup.Ct. Minn. 1975).  The Highway Department tried to get Baillon to grant a temporary construction permit giving the state an easement to go on his property adjacent where Bolander was constructing I-35.  Although Baillon wouldn’t grant the easement, Bollander’s workers trespassed on the land and destroyed a number of trees and shrubs. Baillon wanted the particular trees, in order to preserve a natural and wild appearance, to abate noise from the highway, and to preserve the beauty of the premises.  The trial court found that Baillon was damaged by the Bolander company’s intentional acts in the sum of $500.

Arguing that the trial court should have applied as a measure of damages the replacement cost of the trees and not, as the trial court held, the diminution in value of the real estate, and that he was entitled to treble damages, Baillon appealed.

Held: The award of damages was upheld in part.  The Supreme Court held that the proper measure of damages for the destruction of trees which, for the most part, were quite small, ill-formed and not particularly desirable as shade trees or ornamental trees, but which served to prevent erosion and acted as sound barrier, was the diminution in value of the real estate rather than the replacement cost of trees (even though the trespass was willful).

However, treble damages should be awarded. The Court held that where the highway contractor — in the course of building the freeway — intentionally cut the trees, which did not protrude over highway. The trespass was not necessary for contractor’s purposes and was not “casual.”  It was clearly the duty of the trial court to order treble damages unless Bolander’s activities came within one of the exceptions specified in the statute, and those activities clearly did not.