A few weeks ago, we talked about the Murrells of Rancho Palos Verde, California, a sordid tale of wealth, arrogance, clever lawyers, and Pyrrhic victories. Today’s case may lack money, power, hubris, and clever attorneys, but – like the Murrells – Leslie MacCardell won a hollow victory.

This case starts as a tale of lawyers screwing up. Yes, the very idea that a trained legal professional who exercises the utmost care could err taxes one’s credulity. But just for the sake of argument, let’s imagine for a moment that such a thing is possible…

The mistake was made by the professionals in the Massachusetts Land Court way back in the 1940s. Visualize the plot… two lots located next to each other, a power line easement granted way back in antiquity that didn’t describe the corridor of the easement at all, and… well, like a sophomoric sitcom, you can see where this is heading. When the Land Court issued certificates of title (a Massachusetts thing) it recorded the easement on Lot 2. The problem is that the power lines went across Lot 1. Hilarity ensued.

No one really notices power line poles – they’re just there. So it’s no surprise that nobody noticed the blunder until the neighbor on Lot 2 wanted to increase the size of his electrical service. The power company needed to install a transformer, and as a matter of course, it checked land records to verify its easement. Lo and behold, it found that the easement had been recorded on the wrong land. “No probalo,” the power company said, and it sued Leslie MacCardell — on whose land the power lines were located — to have the easement sort of eased on over to Leslie’s lot.

Not so fast, Leslie exclaimed. She fought back, arguing that she was a purchaser in good faith, and nothing in the records she had searched when she bought the place revealed a power company easement. “Good faith, indeed!” hooted the power company. She had actual knowledge of the easement when she bought. After all, the poles were there and her lights turned on (yeah, the utility actually said this) and she got a bill. How’d she think all of that happened if not for an easement?

Well, said Massachusetts highest court, in any of several ways. Despite the power company’s rather arrogant suggestion that it was just inconceivable that it would not have a proper easement, the Court said the poles could have been there permissively, or maybe — as it turned out — it was nothing but a trespass. Whatever it was, the Court held, it wouldn’t just assume that a landowner had actual knowledge. Rather, it was up to the power company to prove she did. And it didn’t.

We’re guessing that, just like the Murrells in yesterday’s case, this turned out to be kind of a Pyrrhic victory for our plucky heroine. Clearly, the power company’s poles had been on her property, openly and notoriously and continuously and adversely for many years. The utility probably had an open and shut case for a prescriptive easement, and it seems curious that it didn’t plead that as an alternate cause of action.

Commonwealth Elec. Co. v. MacCardell, 450 Mass. 48, 876 N.E.2d 405 (Sup.Jud.Ct. Mass. 2007). Thomas Murray owned two parcels of land. He granted an easement to the electric company for the installation of transmission lines. The easement didn’t provide compass directions, but instead mentioned that the land was located in Duxbury and that the pole lines could “enter from land now or formerly of Plum Hill Avenue and cross to land now or formerly of Chester L. Churchill.” In 1944, the Murray estate filed an action in the Land Court to register and confirm the title to the two parcels. Both the certificate of title and the Land Court decree of registration mistakenly said that Lot 2 was subject to the pole easements when in fact was Lot 1. MacCardell owns Lot 1, the lot that contains the actual poles (which supply electricity to both her place and the adjacent property). Neither MacCardell’s title nor the next-door neighbor’s title mentions the utility easement. When her neighbor asked for increased electrical service, the power company decided it had to install a transformer. 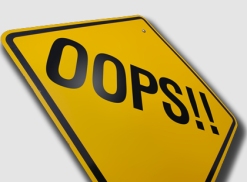 During its routine check on its easement, the utility found that there was an easement on Lot 2 but no easement on for Lot 1. The utility petitioned the Land Court to amend MacCardell’s title for Lot 1 to include the easement. MacCardell argued that in 1944 the Court’s decree imposed the easement on Lot 2, not Lot 1. She claimed she purchased a title with no encumbrances, and allowing the electric company to amend her title would impair her property. The Land Court entered judgment in favor of MacCardell. The utility appealed, but the Appeals Court affirmed the Land Court’s judgment. Thereafter, the electric company appealed to Massachusetts’ highest court.

Held: MacCardell owned her land free of the easement. Massachusetts law is settled that titleholders and subsequent purchasers of registered land for value and in good faith take “free from all encumbrances except those noted on the certificate.” With respect to easements, the general rule is that in order to affect registered land as the servient estate, an easement must appear on the certificate of title. There are two exceptions to the general rule: (1) if there were facts described on the certificate of title that would prompt a reasonable purchaser to investigate further other certificates of title, documents, or plans in the registration system; or (2) if the purchaser had actual knowledge of a prior unregistered interest. In this case, no one disputed that the easement was not recorded anywhere in MacCardell’s chain of title. However, the utility argued that she had actual knowledge of the easement.

Who even notices utility poles?

The “actual knowledge” exception means that for a titleholder to benefit from the protections afforded by the land registration system, the titleholder must not possess actual knowledge of unregistered easements. The burden of proof lies with the party seeking to encumber an owner’s registered land, in this case, the electric company. Unfortunately for the utility, the Court said, it had presented no proof that MacCardell had actual knowledge of the easement.

All the utility was able to argue was she had utility poles on her property, she could turn her lights on every morning, and she received a monthly utility bill. All of that proved she had knowledge, the utility claimed, because it was “inconceivable that a utility company’s installation and use of poles” would ever be permissive rather than a claim of right. The Court rejected this, suggesting that the poles, the power, and the bill might equally suggest that the use may be adverse, which does not create an easement under the law, or a registered owner might have granted permissive use. What’s more, the Court said, the mere presence of a utility pole didn’t automatically place a registered landowner on notice that her property might be encumbered, because the actual owner of a utility pole isn’t readily ascertainable, and the average person may be unaware of the exact boundaries of the land. To meet the actual knowledge exception, the Court held, there must be some intelligible oral or written information that indicates the existence of an encumbrance or prior unregistered interest.