Either the aftermath of battle … or the morning after a U.S. celebration of Cinco de Mayo. The Mexicans, having more sense than we do, make little fuss over May 5th.

Today we celebrate Cinco de Mayo, the most cherished of Mexican patriotic holidays, a day when all true patriots of the Escudo Nacional de México honor the great…

Pendejadas! All right, Cinco de Mayo is essentially unobserved in Mexico, but it is commemorated in all but two bars in the U.S. to celebrate a surprising but utterly insignificant victory of Mexican forces over the French Army. So today we hoist a cerveza to Kelly Rush. Mr. Rush, like the Mexican military, won a meaningless trial court victory on the way to getting routed.

The French invaded Mexico because our neighbor to the south owed reparations to the Second Empire, but decided that a siesta was more salubrious than settling up.  By contrast, Mr. Rush was looking to be paid for the work he had done for JoAnn Goodwin. Kelly is undoubtedly an arborist and landscaping specialist of the first water, but as a businessman … well, that’s another story.

Mr. Rush bid a job for JoAnn Goodwin. And like all of Gaul, it was divided into three parts. One part was tree removal, one was landscaping, and one was the installation of a drain system. Of course, as soon as the job began, there was mission creep. More trees were to be cut down, and then more, and extra branches were to be hauled away. Rush diligently completed the extra work, but he wasn’t nearly so diligent in getting change orders signed by his customer, leading to inevitable confusion.

Alas, hilarity did not ensue. Instead, JoAnn denied asking for any more trees to be cut down, and alleged Rush was overcharging her. Rush said more money was owed. At that point, Kelly “Who Needs a Lawyer?” Rush sued Ms. Goodwin in Justice of the Peace Court, a very informal court in Texas for small issues. He won $4,500. It was his moment, his own victory at Puebla. But recall that after getting his Gallic butt kicked on May 5, 1862, French General Charles de Lorencez responded a year later with a second Battle of Puebla. No one talks much about that one, because the cheese eaters routed the Mexican forces and headed for Mexico City. Like Monsieur General, Ms. Goodwin regrouped, reprovisioned, and came after Mr. Rush again.

In her own second battle, Goodwin appealed to the regular trial court, which was obliged under Texas law to hold a whole new trial. At that trial, Rush’s damages fell from $4,500 to $200, despite the fact he showed the court the contract, two change orders Ms. Goodwin had initialed but not signed and one which he had prepared but she hadn’t even initialed.

The stubborn Mr. Rush appealed the $200 verdict. At the Court of Appeals, Kelly Rush found himself really swimming upstream. His only argument was that the trial court’s decision was contrary to the weight of the evidence, and those cases are hard to win on appeal. To make matters worse, in his zeal to save money, Mr. Rush forgot that sometimes lawyers are good for something. That “something” here would have been to get the documents on which he was relying actually admitted into the trial record so the court of appeals had something to look at. Without the missing documents – which Kelly Rush hadn’t introduced into the record – the Court of Appeals said it really had nothing to look at, and the $200 award stood.

Pozole – the national dish of Mexico.

Parenthetically, one would think that the trial court would have helped out layman Kelly Rush on coaching him to introduce the documents into evidence. But it wasn’t required to. We bet Kelly Rush was glad he saved so much money by not hiring one of those worthless lawyers to help him out! Lesson: Document your work. Get signatures from the customer. Hire a lawyer when you need one. After all, lawyers hire arborists when they need them. OK, end of lesson … and the pozole’s on!

Rush v. Goodwin, Not Reported in S.W.3d, 2007 WL 3380025 (Tex.App.-Waco 2007). JoAnn Goodwin requested a landscaping bid from Kelly Rush involving three parts: tree removal, landscaping, and construction of a French drain system. After completing the work, Rush complained that he was not paid in full.

Rush complained that he ended up cutting down many more trees than originally agreed to. Both Rush and Goodwin walked the property, and they agreed to have 26 trees cut down. But Rush said that after the initial agreement, the number of trees to be cut down kept changing. He claimed that the final agreement called for removal of 36 large trees, 14 small trees, and 1 large limb from Goodwin’s property, at an agreed-upon price of $200 for each large tree, $100 for each small tree, and $100 for removal of the large limb. The total was $8,700.

At trial, Rush presented an original contract which he had signed and Goodwin had initialed stating that 26 trees were to be cut down at $200 each and a large limb removed for $100, for a total of $5,300. As well, he presented a document only he had signed – a request for the removal of 36 large trees at $200 each, 14 small trees at $100 each, and removal of a large oak branch at $100 – and another he had signed and Goodwin had initialed in part by Goodwin, reflecting an agreement to cut and remove 33 trees at $6,600.

No, this is not Mr. Rush on his way to hack down those extra trees. Rather, it is a Cinco de Mayo celebrant in a period costume, a Mexican version of a U.S. Civil War re-enactor.

Goodwin contended she only agreed to have 26 large trees removed from her property at $200 per tree. She said that after counting the stumps, only 26 trees had been removed, and that even if more than 26 trees had been removed, she never agreed to their removal. She maintained that Rush overcharged her $1,400 to remove trees that were not cut down. In addition to tree removal, the agreement called for the removal of vegetation and growth, the spreading of dirt, and the removal of fences. Rush and Goodwin agreed that the cost of that project would be $3,600. Goodwin paid Rush $1,000 on the landscape agreement and still owed $1,600. She argued that because she overpaid $1,400 on the tree removal and other projects, she did not owe the $1,600 balance.

Rush also argued that after starting the project, Ms. Goodwin asked that extra side projects be performed, and the cost of these projects came to a total of $749.94, none of which Goodwin paid. He filed suit without an attorney against Goodwin, seeking relief of only $1,600 but being awarded $4,500 plus court costs. A glorious and unexpected windfall! But Ms. Goodwin appealed to county court, where in a bench trial the court returned Rush to reality, awarding Rush a symbolic $200 with interest. 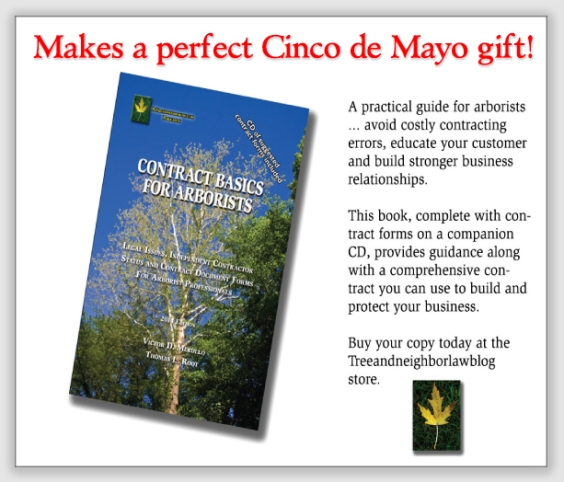 Far be it from us to plug our book, but if Kelly had “Rushed” out to buy a copy, he would have spared himself some grief.

The Court found that Rush had completely bollixed up the trial. During that proceeding, Rush referred to the various documents he said established the terms of the tree removal and landscape agreement, but he failed to ask the court to admit any of them into evidence. The Court of Appeals said that in order for it to consider the documents, those papers had to have been introduced and admitted at trial. Without them, the Court could only examine the parties’ testimony. That testimony was largely in conflict, and it was the role of the trial court, not the Court of Appeals, to determine which party’s testimony was more believable.

The trial court’s award of only $200 in damages, the Court of Appeal said, was not overwhelmingly against the great weight of the evidence, especially when the alleged contracts were not in evidence.