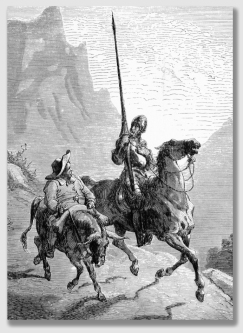 A Yankee landowner ­– we’ll call him El Ingenioso Hidalgo Don Juan Roberto Hamilton de la Vermancha – was furious at the Holland Town select board when it announced plans to widen the road in front of his house. He complained to the Town, and it scaled back the plans. That wasn’t good enough for our hero: He sued.

The case went to the Supreme Court of Vermont twice, where our landowner proved his point. The Court held that the Holland Town tree warden couldn’t cut down the trees in front of Don Hamilton’s house without holding a hearing first.

A tree warden is a concept unique to New England, a municipal official given powers by statute to make decisions about the cutting and trimming of diseased or hazard trees. The tree warden’s powers are defined by statute.

In today’s case, when all the legal dust had settled, the Town succeeded in widening the road, the tree warden was able to cut down the trees standing in the way of progress, and all necessary hearings were held, with everyone – including Don Hamilton receiving due process, that is, the “process that is due.”

For Don Hamilton’s considerable efforts in protecting the due process rights of all landowners who might have the tree warden try to cut down healthy trees without a prior hearing, the plaintiff was rewarded with damages … of one dollar.

Of course, Don Juan Roberto Hamilton used two lawyers and spent about $30,000 in pursuit of his glorious quest, and for reasons you can read about in the full case, he didn’t win any attorneys’ fees. But he has his dollar, and the sense of satisfaction that he stepped up and made a difference.

Hamilton v. Town of Holland, 950 A.2d 1183, 2007 VT 133 (Sup.Ct. Vt., 2007). John Robert Hamilton owned property on Lackey Road. In 2001, the Town select board decided to widen a half-mile section of Lackey Road because the section was not wide enough to allow large vehicles – such as a truck, snowplow or school bus – to pass each other safely. The Town engaged the assistance of the State District/Regional Highway Commission in selecting and marking the trees that needed to be removed for the road project.

As originally planned, the road-widening project required removal of many trees, and would have required blasting, digging drainage ditches, and installing culverts. John objected to the tree-cutting proposal. The select board voted to go ahead with the project anyway, but it scaled back the road and reduced the number of trees to be cut.

John sued for a declaratory and injunctive relief, seeking to prevent the Town from cutting down the trees. He argued that the Town must follow the statutory procedures for altering a public highway, including performing a survey of the road, before proceeding with the widening project. The Town argued that it had authority to maintain Lackey Road, and that widening the road is part of the Town’s maintenance responsibility. The Town also argued that the Town’s tree warden was not required to hold a hearing before removing the trees, because they were a hazard to the public. The trial court granted summary judgment for the Town, and John appealed.

The Vermont Supreme Court reversed the decision, holding that the record did not support the court’s grant of summary judgment, because while the trial court had grounded its decision in part on the fact that the trees to be cut were all located within the right-of-way for Lackey Road, and that all of the work would take place within that right-of-way, the location of the right-of-way and the trees to be cut was an issue of fact that was not resolved. The Supreme Court also agreed with the landowner that state law on tree wardens did not grant the tree warden authority to cut public shade trees under the “public hazard” exception unless the trees themselves presented the public safety hazard.

On remand, John amended his complaint, raising a 42 U.S.C. §1983 claim of deprivation of his constitutional right to due process. The due process claim was based on the failure of the tree warden to hold a hearing prior to removing the trees in question. He also claimed trespass and conversion of trees, both of which claims were grounded in state law. The trial court concluded that the road project was “more extensive than routine maintenance,” but that fact alone did not constitute “a major alteration to the road as that term is defined in state law.” Therefore, the court held, the project did not trigger the requirements of 19 V.S.A. §704 for a survey.

The trial court also concluded that the tree warden’s failure to hold a hearing on the proposed cuttings violated 24 V.S.A. §2509, but that John wasn’t injured by the violation. The court awarded nominal damages in the amount of $1.00 for his §1983 claim, and — because of these nominal damages, John was the prevailing party under federal law and entitled to attorney’s fees. The Town appealed, and landowner cross-appealed.

John Hamilton only won a dollar – but what a nice dollar it must have been!

Held: The trial court’s determination that the widening was not a major alteration was upheld. According to the statute, “ ‘[a]ltered’ means a major physical change in the highway such as a change in width from a single lane to two lanes.” If the change constituted an alteration, then the Town was required to comply with 19 V.S.A. §704, which required expensive studies of project before it was undertaken.

The project involved cutting fifteen trees in front of John’s property, a total of thirty to thirty-nine trees along the entire length of the road, and regarding and adding gravel. John argued that the original project was much more extensive, but the Court said that the Town’s response to his original complaint — to scale back the project — was an appropriate response, and the statute had to be applied to what was finally done, not what was originally planned. The Court observed that the project did not widen Lackey Road from one lane to two, but rather all of the work was done within the existing right-of-way. No culverts were installed or blasting done. Ditches were improved and gravel spread, which appeared to be “maintenance” under state law. Trees were removed, but such removal is specifically contemplated as a matter of maintenance by 19 V.S.A. §904. The Court agreed with the Town that all the work it performed indeed qualified as maintenance. As such, the Town did not need to perform the survey requirements found in §704.

John had spent $2,000 planting new trees, but he admitted the new planting took place in an area different from where the Town proposed to cut trees and was completed before any cutting by the Town. The Court thus found that John’s plantings were not related to the roadwork.

Inasmuch as John did prove a deprivation of due process and a violation of his property rights in the removal of trees located in the Town’s adjacent right-of-way, the superior court was correct to award him nominal damages of $1.00. Because the Town cut down the trees without holding a tree-warden hearing, the Court said, John’s due-process rights were violated regardless of his inability to prove loss or damage.