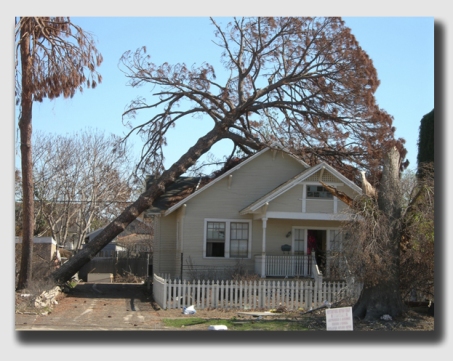 Crunch. After the tree falls, the insurance company adds insult to injury.

An unhappy homeowner from urban Cincinnati, Ohio – we’ll call her Sylvia Glade – wrote to us about her neighbor’s oak tree. It seems that one of the oak’s branches was overhanging Sylvia’s home. The branch constantly dropped sticks, and the tree itself has been shedding branches regularly. As far back as the late 1990s, Sylvia thought the tree was dangerous and began asking her neighbor, whom we’ll call Elouise, to do something about it. A tree expert whom Sylvia hired five years ago to inspect her own trees agreed, saying the big oak should go.

The elderly Elouise was unmoved. She gave Sylvia permission to cut down the tree (as long as Sylvia paid for it), but then denied her the right to enter the property to do so. With the property line hard up against Sylvia’s house, Sylvia couldn’t even get a ladder under the branch to cut it away without Elouise’s cooperation (which, it is obvious by now, was not to be forthcoming).

But there’s good news: Sylvia doesn’t have to worry about that branch anymore. Sadly, there’s bad news, too: the branch is no longer a hazard because it fell on a windy day, crushing two floors of Sylvia’s house. Her neighbor’s insurance carrier said, “Oops, looks like an act of God! Not our responsibility.” Sylvia thinks God should be left out of things, because the branch — which broke right at the trunk — looked very decayed.

Elouise’s insurance company says Elouise had no idea the tree wasn’t healthy. “She didn’t know, so we don’t owe,” the company’s mantra seems to be. Sylvia complains she told the neighbor on many occasions, and even the neighbor admits she saw decayed branches that had fallen from the tree. Once, Elouise even hired Sylvia’s son to haul away some large branches that the old oak shed in a windstorm. Sylvia asked us what duty of care Elouise owed her under Ohio law.

We start with the evolution of the Massachusetts Rule. Originally, the Rule held that a homeowner usually had no remedy against overhanging branches, other than his or her right to trim the branch back to the boundary line. That Rule has been limited in the last decade or so, notably in the Virginia Supreme Court case of Fancher v. Faglia (2007) and the North Dakota Supreme Court holding in Herring v. Lisbon Partners Credit Fund, Ltd. (2012). Both of those courts ruled that while a property owner might be limited to self-help where an encroaching tree was only doing what trees do – that is, dropping leaves, nuts, berries, seedpods and twigs – where a tree becomes a nuisance, the owner of the tree is liable for removing it.

In Sylvia’s case, the insurance company is wrong. It’s not enough that the neighbor says she didn’t know the branch was dangerous. The other half of the question is this “should have known” business. Was Elouise on constructive notice that the tree was dangerous, that is, should she reasonably have known the decay was making the tree unsafe? If Sylvia is right, the evidence will show the neighbor was told many times the tree was a hazard. Elouise had witnessed the tree drop a number of large branches of the previous years. She had to hire Sylvia’s brawny son to clean up the mess. And Sylvia told her about the danger, even agreeing to pay for the removal of the tree herself.

Several Ohio cases (such as Wertz v. Cooper) suggest that neighbor Elouise – being an urban dweller – has a greater duty to inspect her trees than would a country squire. The evidence suggests Elouise had every reason to be concerned about the tree, and thus had a duty to inspect it to be sure it wasn’t about to collapse Sylvia’s house.

Elouise’s insurance company may want to rethink its position… and start looking for its checkbook.

Nationwide Insurance Company, et al. v. Jordan, 639 N.E.2d 536 (1994). This action arose between adjoining landowners as a result of the falling of a mammoth maple tree. The insurance company, which had paid the damages to its insured’s place, sued for trespass and negligence. The defendant tree owner testified that she had no notice the tree was susceptible to falling. Her tenant likewise testified that she had no notice of the tree’s danger. The defendant’s tree service manager testified that he worked on the property’s trees every two years and that the tree in question was not unsafe less than two years before it fell. The only person to testify to notice that the tree was rotten and likely to fall was the plaintiff’s insured.

The trespass claim arose because the plaintiff maintained that the falling tree trespassed on the insured’s property. The trial court made short work of this, holding that the only way liability could be imposed on Mrs. Jordan without proof of fault would be if the tree were an absolute nuisance. Healthy trees growing on real property, even urban real property, are not absolute nuisances, the trial judge said. Thus, the insurance company had to prove that Mrs. Jordan either knew or had constructive knowledge that the tree was likely to fall. The insurance company couldn’t prove that, so the trial court found for Mrs. Jordan. The insurance company appealed. 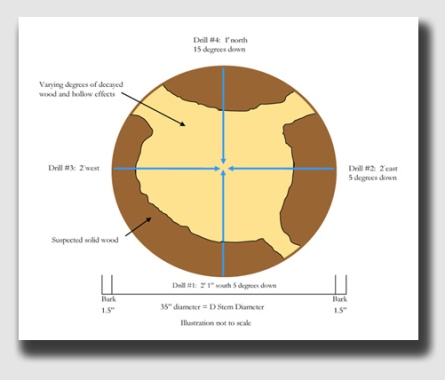 A diagram of one modern method of measuring a tree’s decay. Elouise had any number of options – some cheap, some costly, some old school, some high-tech – for verifying the health of her big old oak.

Held: Mrs. Jordan was not liable. The Court said that there was no evidence that Mrs. Jordan actually knew or had any reason to know that the maple tree was in danger of falling. The neighbor complained that the tree’s propensity to fall was obvious to her, but she admitted he never told Mrs. Jordan. The Court observed that “[h]ad the plaintiff conveyed this knowledge to her neighboring landowner, the danger might well have been obviated, or, alternatively, the plaintiff’s hands would be clean and the defendant would have been on notice and resultantly liable for the fall.”

The Court further held that a tree on an owner’s property was not an “absolute nuisance,” and thus the adjoining landowner could not proceed merely upon strict liability against the owner. Instead, the neighbor was required to prove negligence. To recover on a theory of negligence arising out of a falling tree, a plaintiff’s evidence must establish that defendant had actual or constructive notice of patent danger that the tree would fall. Here, Mrs. Jordan had neither actual notice nor constructive notice of the tree’s dangerous condition. Both Mrs. Jordan and her tenant testified that they had no notice of the tree’s danger, Mrs. Jordan’s regular tree trimming contractor worked on the property’s trees every two years and found that the tree in question was not unsafe not more than 24 months before it fell.

The Court ruled in favor of Mrs. Jordan.