WHO GIVES A HOOT? 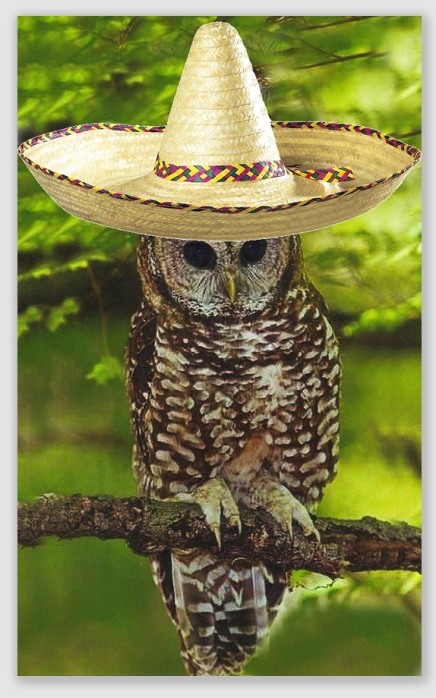 The Mexican Spotted Owl is easily identified by its distinctive headgear.

Now a paean to the Mexican Spotted Owl, that cute, furry little critter. Well, maybe it’s not furry – more like feathery – but the bird is an endangered species just the same.

When Precision Pine & Timber landed 14 contracts to destroy wildlife habitats — uh, make that harvest timber — its performance of the agreements got derailed by a U.S. District Court, which stopped the Forest Service because it had been sloppy in figuring out how to save the owls. The contracts covered the eventuality, but Precision Pines was entitled to ask for its “out of pocket” expenses incurred if the performance of the contracts was delayed. And performance was indeed delayed for up to 15 months as the Forest Service was sent back to school by the district court until it got its analysis of the spotted owl problem done to the court’s satisfaction.

The Forest Service extended the termination date of the contracts, but Precision Pines nevertheless counted up its expenses and turned in a bill for a breath-taking $13 million. The Forest Service took a sharp pencil to the invoice, and offered about $18 grand. So Precision Pines sued, arguing it was entitled to a “lost volume” theory. Follow this: if Precision Pines hadn’t been delayed, it would have made a ton of money during that 15 months that, because of the interruption, it didn’t make until much later. If it had made the money when it originally contracted to make it, it would have used the profits to invest in other contracts, where it would have made profits to invest in other contracts, and so on.

Like a snowball rolling down a slope, the few bucks from the interrupted contract would have yielded an avalanche of green someday. But the Court said while that might be so, it didn’t make the deals that never were legitimate damages from the interrupted timber deals. The damages were simple: the profits that weren’t made during the period of delay, minus the profits made after the contracts resumed.

Precision Pine & Timber, Inc. v. United States, 81 Fed. Cl. 235, 2007 U.S. Claims LEXIS 295, , 2007 WL 2753329 (Fed.Cl., Sept. 14, 2007). Precision Pine & Timber held 14 timber contracts with the U.S. Forest Service. In August 1995, the Forest Service suspended the contracts after a U.S. District Court required the Forest Service to submit its Land and Resource Management Plans for consultation with the Fish and Wildlife Service in light of the listing of the Mexican Spotted Owl as a threatened species.

About eight weeks after the Mexican Spotted Owl suspensions were imposed, the Forest Service released three of the 14 timber sale contracts from the suspension. The balance did not get released for more than a year afterward. Each of the suspended contracts contained a provision on interruption or delay that provided in the event of interruption or delay of operations, Precision Pine’s exclusive remedy was adjustment of the contract term and out-of-pocket expenses incurred as a direct result of the interruption or delay. Out-of-pocket expenses did not include lost profits, replacement cost of timber, or any anticipatory losses.

Held: The Forest Service breached the contracts, but the damages were severely curtailed.

The Court held that the lost volume seller theory, as formulated by Precision Pines, depended on showing that its failure to make profits on the 14 timber contracts in a timely manner rendered it unable to participate in other future contracts, thus missing out on profits from those deals. The Court held that such future damages for independent and collateral timber contracts not related to the subject matter of the breached contracts were unrecoverable.

The Court further held that permitting Precision Pines to use these unrecoverable damages to reduce the amount of the deduction required to be made in the lost profits calculus — to account for the profits earned on the breached contracts — would be the functional equivalent of actually awarding damages for the lost profits on the future additional contracts. What’s more, the Court said, that even if Precision Pine’s theory of recovery did not require it to show unrecoverable damages, Precision Pines had failed to that it met the criteria for application of a modified lost volume theory.