THE JURY IS INSTRUCTED TO DISREGARD THE SMELL 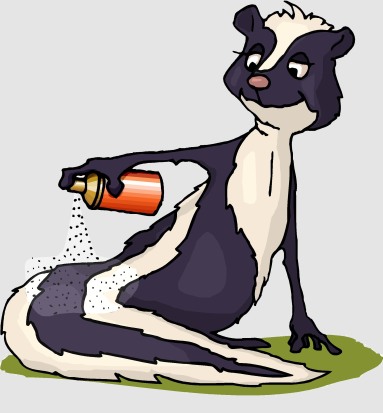 Once the skunk lands in the jury box, the smell tends to follow … no matter what the judge may say.

Trial courts often must give juries instructions to disregard certain evidence they have heard in reaching their verdicts. As a court once described it, “if you throw a skunk into the jury box, you can’t instruct the jury not to smell it.”

Today’s case starts out to be pure California … a landslide, a muddy pool, emotional distress because of a dirty carpet. Oh, the humanity! The injured Ms. Rahmanian claimed that her neighbor Nelson had suffered a water leak, and the leak damaged her property. The extent of the damage was grievous, Ms. Rahmanian pled, well over $200,000. Her house was a mess, carpets ruined, pool filled with mud … she demanded justice!

But it turns out that Ms. Rahmanian had already gotten twenty grand from her insurance company, and she hadn’t used a penny of it to dry out carpets, clean walls, empty the pool — the usual cleanup performed to keep a bad mess from becoming worse. The defendant managed to sneak that piece of evidence into the record, and as a result, the plaintiff only collected about $110,000, just about half of what she wanted. How could she ever clean the drapes on that?

People damaged by the negligence of others have a duty to mitigate. That means that they are expected to take reasonable steps to minimize the damage. It only stands to reason. The courts will try to put the innocent injured back in the position they occupied before the damage. But the innocent aren’t expected to sit on their hands, either … or spend money intended to clean up the damage on mimosas at the Beverly Wilshire.

Ms. Rahmanian complained on appeal that the jury shouldn’t have heard about the insurance money. She was literally correct. Who got what from their insurers is irrelevant to whether a party was negligent, and whether that negligence caused damage. But the Court of Appeals clearly lacked sympathy for her. It held that — while the evidence about the insurance money shouldn’t have come in — Ms. Rahmanian didn’t suffer for it, because the trial court told the jury to disregard it.

Never mind that it might be hard for the jurors to ignore the fact that a poor pool-deprived supplicant like Ms. Rahmanian already had collected some dough from her insurance company and spent it on … well, pedicures, poodles in purses, whatever Californians fritter money away on when they don’t mitigate. The Court did some rough justice here, something that happens more often than you might think. 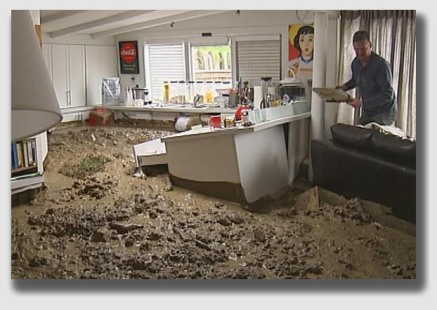 To hear Ms. Rahmanian tell it, her bungalow was fouled beyond salvation.

Rahmanian v. Nelson, Not Reported in Cal.Rptr.3d, 2007 WL 1123983, 2007 Cal. App. Unpub. LEXIS 3060 (Cal.App. 2 Dist., Apr. 17, 2007). Nelson’s house is located above the house owned by Sharon Rahmanian. A water leak on Nelson’s property caused the slope located at the back of her land to collapse, leading to a mudslide that covered her pool and patio area. She sued Nelson for negligence and trespass.

Nelson did not dispute liability. The primary issue at trial was the amount of damages. Rahmanian’s witnesses testified that the mudslide caused damage to the pool and patio, and to the French doors at the back of the house. In addition, mud or muddy water entered the house, causing damage to everything located near the doors, including carpets and drapes. Rahmanian’s expert testified that to repair the slope would cost about $75,000, plus $24,440 to re-landscape the slope. The cost to repair the pool and house would added another $134,000, and she lost use of the pool to the tune of $1,153 a month. For good measure, she complained of damages from physical symptoms and mental suffering she had experienced since the mudslide.

Nelson’s witnesses said the mudslide could not have caused much damage to the patio or pool. They also questioned whether water or mud caused any damage to the interior of the house. Nelson’s experts estimated it would cost $89,371 for repairs and re-landscaping. During the trial, there were three references to $20,000 Rahmanian had already received from her insurance carrier but had not used to repair any damage.

The jury awarded Rahmanian $80,000 for slope repair; $21,000 for other property damage; $5,000 for loss of use; and $4,000 for emotional distress. Not satisfied with this amount, Rahmanian moved for a new trial, which the court refused. She appealed.

Held: The trial court shouldn’t have let testimony about the $20,000 in insurance money in, but that wasn’t enough to give Ms. Rahmanian a new trial. Under California’s collateral source rule, if an injured party receives some compensation for his injuries from a source wholly independent of the tortfeasor, such payment should not be deducted from the damages which the plaintiff would otherwise collect from the tortfeasor. 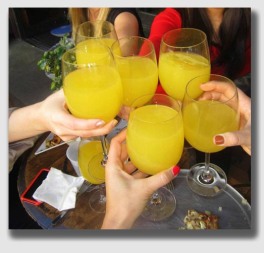 Too many mimosas, too little cleanup.

In order to permit such evidence to be introduced, the trial court must first weigh the relevance and probative value of evidence of the plaintiff’s receipt of collateral benefits against the inevitable prejudicial impact such evidence is likely to have on the jury’s deliberations. Here, that advance weighing was not done. But, the Court said, Rahmanian was not prejudiced. The jury asked the court for guidance on the impact of the $20,000 during deliberations, and the court instructed the jury to ignore what it had heard repeatedly. Ms. Rahmanian did not object to the language of the court’s instruction: in fact, her counsel supplied the key wording used by the court, so she was not allowed later to raise an objection concerning its clarity.

Because the court, with the assistance of counsel, was able to intervene during deliberations to prevent the jury from acting on the misleading information it received concerning the $20,000, the jury’s verdict could not have represented an improperly discounted award. Thus, the appellate court said, no miscarriage of justice occurred.

The trial court also gave an instruction to the jury that Ms. Rahmanian had a duty to mitigate the damage, that is, to take immediate steps after the landslide to minimize the long-term effects. Ms. Rahmanian maintained that the only evidence to support the instruction was the improperly admitted evidence of the $20,000 insurance money. The Court said that because the trial court had given a curative instruction about the insurance money, the appellate court presumed the jury followed the court’s final directive to “not consider” the $20,000 in calculating damages.