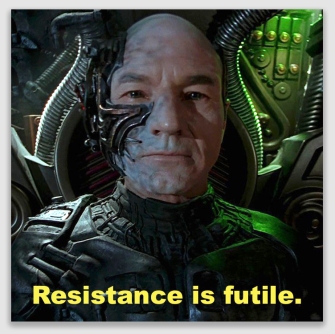 One of the back room perks of running a tree law website is that we can see what kinds of searches lead readers to our little patch of the Internet. Probably the top search is some kind of encroachment issue, where neighbor’s tree is overhanging the searcher’s property, or a dead tree next door is about to fall on the searcher’s roof… that kind of thing.

But a perennial also-ran is the irate homeowner or tree-hugger complaining about a swarm of cretins wielding chainsaws, trimming trees for the benefit of power lines exercising the same care and restraint William T. Sherman showed when he toured Georgia in the fall of 1864.

There are two immutable truisms to remember when the power company tree-trimming contractors come around. First, the odds are very high that the power company does own an easement across your property that lets Leatherface and his buddies butcher your trees. Second, if you want to stop the sylvan massacre, you will soon discovery that – as the Borg liked to say – resistance is futile.

Today’s case, from California, illustrates just how immune utilities and their contractors are to the entreaties of the homeowners whose lands the easements cross. The Sarales, who ran a walnut farm, sued to stop Pacific Gas & Electric from excessively trimming their walnut trees. The California Court of Appeals agreed with them that it had jurisdiction to determine whether PG&E’s easements across their lands were valid. But once the easements were held to be valid, the courts’ inquiry ended. Any complaint that PG&E was being unreasonable in its use of the easement, that is, in how enthusiastically it was hacking up the trees within the easement, could only be done in a proceeding before the California Public Utilities Commission. 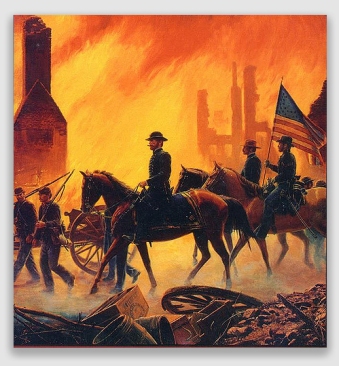 Cutting a swath through Georgia prepared General Sherman for a career as a tree trimming contractor for an electric company.

Such a hearing with the Commission, pitting a homeowner against a public utility before a government agency that regulates that utility is akin to putting a mouse between two cats. But such is the law almost everywhere.

Sarale v. Pacific Gas & Electric Co., 117 Cal.Rptr.3d 24, 189 Cal.App.4th 225 (Ct.App. 3rd Dist., 2010). The Sarales own farmland across which PG&E claimed an easement land for electric transmission lines pursuant to a 1915 written grant. The right-of-way gave PG&E “the right of erecting, constructing, reconstructing, replacing, repairing, maintaining and using for the transmission and distribution of electricity… and also a right of way [giving PG&E] full right and liberty of cutting and clearing away all trees and brush on either side of said center line whenever necessary or proper for the convenient use and enjoyment of the said line of towers and wires and right of way…”

The Sarales sued PG&E, which defended by saying it was “legally mandated to take appropriate measures to maintain vegetation clearances and, accordingly, we have trimmed and continue to trim all trees that may interfere with our electric power lines-pursuant to both our rights under our easement/ right of way as well as the rules and regulations under which we are required to operate.”

The Sarales denied the existence of a utility easement on their land, but said if the easement were found to exist, PG&E should be “authorized by law to trim no further than the distance established by the court, radially measured at time of trimming, and not further, without [the Sarales’] permission.” They sought an injunction preventing PG&E from “destroying vegetation or trimming crops under cultivation…” and demanded damages for trespass.

PG&E responded that California Public Utilities Code § 1759 barred the court from exercising jurisdiction over the Sarales’ claims because to do so would interfere with “an ongoing supervisory or regulatory program over which the public utilities commission has sole jurisdiction.”

PG&E’s contractors were only reasonably managing the easement.

The trial court agreed with PG&E, reasoning that the acts alleged by the Sarales “involving and related to… PG&E’s vegetation management practices under and around its power lines, fall within the commission’s regulatory jurisdiction. This court therefore has no jurisdiction over the Sarales’ first amended complaint… Before proceeding against PG&E in superior court… the Sarales must first seek a finding from the public utilities commission that PG&E’s vegetation management practices are excessive or otherwise out of conformance with regulations.’

Held: The Court of Appeals agreed with the trial court. The California Public Utilities Commission holds the “broad authority to ‘supervise and regulate every public utility in the State’.” Section 1759 of the Public Utilities Code bars any court action that hinders or interferes with the exercise of regulatory authority by the Commission.

This broad authority authorizes the commission to “‘do all things, whether specifically designated in the Public Utilities Act or in addition thereto, which are necessary and convenient in the exercise of its jurisdiction over public utilities.”

No court in the state, except the Supreme Court and the court of appeals, has jurisdiction to reverse a Public Utilities Commission order. Nevertheless, the state legislature has provided for a private right of action against utilities for unlawful activities and conduct. The right of action is limited to those situations in which an award of damages would not hinder or frustrate the commission’s declared supervisory and regulatory policies.

Here, the Sarales conceded the commission had authority to regulate trimming distances around power lines. The commission’s authority to “supervise and regulate every public utility in the State” included the authority to require utilities to maintain its systems and equipment “in a manner so as to promote and safeguard the health and safety of its employees, passengers, customers, and the public.” The court said regulating tree trimming distances around power lines effectuated this purpose.

The commission had clearly exercised its authority. Its General Order No. 95 provided rules governing the construction of overhead electric lines. Rule 35 of General Order No. 95 specifically governed tree trimming, and had been changed in 1997 to require wider trimming margins from power lines. 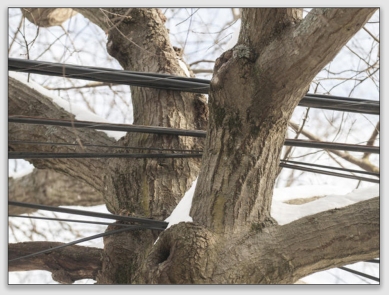 The court held that for purposes of applying the test, “what matters is that the commission has exercised its authority to adopt a regulatory policy relating to tree trimming around power lines…”