Pipelines are tubes through which money flows. There are barrels of revenue and gallons of net income in building those capital-intensive projects.

Yesterday, we read how Buckeye Pipeline Co., got whupped by local tree owner Bob Pichulo. And that was no mean feat. Buckeye is not just a couple of guys in a rusty Reading work truck. Instead, it is a subsidiary of Buckeye Partners, L.P. a master limited partnership that in turn is owned by IFM Investors, a global fund manager owned by 27 Australian pension funds. The IFM bought Buckeye in 2019 in a deal valued at $10.3 billion. At the time, Buckeye had prior year revenue of $4 billion and about $400 million in net income. Buckeye’s assets included 6,000 miles of pipeline, with over 100 delivery locations and 115 liquid petroleum products terminals with aggregate tank capacity of over 118 million barrels, and a network of marine terminals located primarily in the East and Gulf Coast regions of the United States, as well as in the Caribbean.

So Bob was a problem, but not much of one. Or it would not have been if Buckeye had just gone ahead and cut down the 13 maple trees, and paid the $50,000 Bob’s expert said the trees were worth. Buckeye would have had the clear view and open space it wanted for the pipeline. Cut the check, Buckeye. It’s only money.

But Bob’s backwoods Wolverine lawyer had one final trick up his rumpled sleeve. Bob did not ask for money. Instead, he asked for and got a permanent injunction. So Buckeye no longer had the option of cutting the trees and tendering a check to Bob.

Injunctions are extraordinary remedies, generally reserved for cases where the harm is irreparable, that is, not compensable with dollars.

On appeal, Buckeye whined that the trial judge should not have granted an injunction, because Bob’s own expert said the trees were worth $50K. The very fact that Bob could assign a dollar value to his trees, Buckeye argued, meant that the harm was not irreparable.

Everyone knew what Buckeye meant. What it meant was that if it lost, it would trespass anyway, cut the trees it wanted removed, and then remedy its trespass with a checkbook. The trial court did not intend to let that happen.

Bob knew about the easement when he bought the place. Yet it hardly affected him for about 23 years. Then, in 2015, Buckeye sent him a letter informing him of Buckeye’s intent to remove 13 Norway maple trees were on the easement. Buckeye asserted that the trees had to be removed because they obstructed aerial surveillance of and access to the pipeline in case of an emergency or for repairs. In response, Bob sued seeking a temporary restraining order and permanent injunction against cutting the trees.

After an evidentiary hearing on the preliminary injunction motion, the trial court ordered that all underbrush be removed from the easement and the branches on the Norway maples be trimmed to provide a 10-foot clearance.

Buckeye later moved for summary disposition of Bob’s complaint, arguing that it was entitled to remove the trees as a matter of law. Bob responded that there was a real question whether the removal was reasonably necessary for Buckeye’s use of the easement. The trial court agreed with Bob.

Over the course of the four-day trial that followed, the trial court heard Bob’s testimony about the value of the trees to him; pilots’ testimony about the visibility of the pipeline easement after the clearing of underbrush and pruning of the trees; testimony from an expert who estimated that the trees were older than the pipeline, grew shallow roots, and had a monetary value of nearly $50,000; and testimony from experts in oil pipeline regulation, maintenance, and safety who disagreed about whether Buckeye’s proposed plan to remove the trees was reasonably necessary for its enjoyment of the easement.

The trial found Bob’s evidence to be more credible and convincing, and held that removal of the Norway maples was not reasonably necessary. Consequently, it permanently enjoined Buckeye from removing them.

Yesterday, we discussed how Bob’s experts, perhaps with the help of a judge inclined to find the home team a little more believable, steamrolled Buckeye. What we did not talk about was the permanent injunction.

Buckeye complained that the trial court abused its discretion by issuing a permanent injunction against it cutting down Bob’s trees. It claimed the injunction was not a proper remedy because Bob had a legal remedy available, the loss of Bob’s trees was not irreparable, and a weighing of the harms between the parties and the risk to public safety should have favored Buckeye.

It is true, the Court said, that injunctive relief is an extraordinary remedy that “issues only when justice requires, there is no adequate remedy at law, and there exists a real and imminent danger of irreparable injury,” and that he grant of such injunctive relief is within the sound discretion of the trial court. The general rule is that a court will balance the benefit of an injunction to the plaintiff against the inconvenience and damage to the defendant, and grant an injunction or award damages “as seems most consistent with justice and equity under all the circumstances of the case.”

“While an injunction may lie when a tort is merely threatened,” the Court said, “a cause of action for damages will not.”

Buckeye argued that the trial court should not have granted injunctive relief in favor of Bob because the harm to him could be remedied by the payment of money damages. Bob’s expert did testify that the Norway maples had an established value based on their health and age. However, the Court said, just because an object has monetary value does rules out not rule out a permanent injunction. Permanent injunctions are permitted not only “[w]hen an injury is irreparable,” but also when “the interference is of a permanent or continuous character, or the remedy at law will not afford adequate relief” 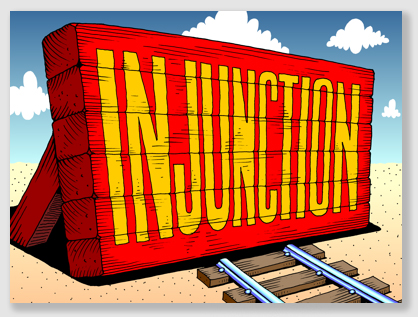 Thus, the Court ruled, proof that monetary damages would not be adequate, or that there would be a permanent interference also could warrant an injunction. Here, the trial court credited testimony from plaintiff that the trees had a sentimental value to him and that no amount of money would satisfy his loss. Further, the trial court noted that removal of the trees would have been permanent, because they reasonably could not be replaced, considering the arborist’s testimony that the trees were quite old and took over 70 years to grow.

Additionally, the Court noted, when a tort merely is threatened, the proper remedy is for an injunction, not for damages. “The trial court did not clearly err in determining that removal of the trees was not reasonably necessary to defendant’s use of the easement.,” the Court of Appeals ruled. Bob showed that Buckeye was threatening to commit a trespass or, in other words, a tort. Consequently, the Court said, injunctive relief was the proper remedy.

In a last gasp, Buckeye argued that the trial court did not weigh potential harms to plaintiff, defendant, and the public. Buckeye is correct that, typically, a trial court is required to “balance the benefit of an injunction to plaintiff against the inconvenience and damage to defendant,” and only issue an injunction if it would be “consistent with justice and equity under all the circumstances of the case.” However, such balancing is not required where a trespass could result from an intentional or willful act. Here, Buckeye made no secret of its intent to remove the 13 Norway maples. “Therefore,” the Court held, “defendant’s proposed action was intentional and willful.” Even assuming that the trial court did not properly balance the harms, the error would have been inconsequential, because the trial court was not required to do so.