YOU, SIR, ARE NO GENTLEMAN

It is fairly common to find people in some kind of kerfuffle over an alleged breach of contract, where one complains that despite what the document might say, the parties had really orally agreed to something else altogether.

That’s what canny lawyers make sure that every contract has an integration clause in it. An integration clause is no relic of the civil rights era. Instead, it provides that the parties have no deals but the deal written down in the contract, and if it ain’t written, well… then it just ain’t so.

Beyond the careful draftsmanship lies the common-law “parol evidence rule.” The word here means “oral” or “solely evidenced by speech.” Today’s case provides a perfect example of it. When the power company got a written easement to trim trees on the Larew estate, that easement provide it could keep the lines free of tree hazard. But as the easement was being signed, Mr. Larew asked, “How about my 300-year old white oak?”

“Oh, that?” the slick power company real estate man said. “We’ll never touch it. You have my word on it.”

Its lawyers, having gone to law school, said, “Parol evidence rule! You can’t introduce evidence of an inconsistent oral deal to undercut a clear written easement.”

They were right about that, but dead wrong that the easement meant that they could do as they liked to the trees. The trimming crew boss talked to the property owners, but then unlimbered the saws and, as for what was needed, said, “I’ll be the judge of that!”

The West Virginia Supreme Court said, “Not so fast, my friend! ‘Reasonableness’ and a due regard for the rights of the Larews have a lot to do with it, too.

Larew v. Monongahela Power Co., 199 W. Va. 690 (Supreme Ct. W.Va., 1997). In 1975, Glen Larew (a predecessor-in-interest to Susan and Keith Larew) granted a written easement to Monongahela Power Company giving Monongahela the right to trim, cut or remove trees in order to maintain electric service. According to the Larews, there was also a “gentlemen’s agreement” in 1975 that a 300-year old white oak tree on the Larew property would never be touched.

However, one day in 1994, Asplundh Tree Expert Company, Monongahela’s tree trimming contractor, told the Larews that tree trimming would commence shortly pursuant to the easement. The Larews discussed the extent of the trimming with Asplundh, but to no avail. Two months later, the trimmers arrive with chainsaws blazing. They trimmed three trees on the Larews’ property, including severely cutting up the 300-year old white oak.

The Larews sued for wrongful cutting, arguing that the extent of trimming was unreasonable. Monongahela filed for summary judgment, alleging that “reasonableness” is not an issue because the determination of the extent of tree trimming needed rests solely with the easement holder. The trial court agreed with Monongahela, and dismissed the Larews’ complaint.

Held: The power company’s easement gave it the right to trim trees to the extent that the trees endangered the safety or interfered with the use of the power lines, but such trimming has to be done in a reasonable manner with due regard to the rights of all parties. The trimming must not inflict unnecessary damage to the land or unreasonably increase the burden on the servient tenement (the property owner’s rights).

The Larews raised two arguments on the appeal. First, they claimed, the trimming violated the 1975 “gentlemen’s agreement” not to trim the white oak. Second, they argued that the trimming performed was unreasonable.

The Supreme Court made short work of the “gentlemen’s agreement.” The parol evidence rule, which generally prohibits the introduction of any extrinsic evidence to vary or contradict the terms of written contracts, is quite clear: prior or contemporaneous statements that contradict clear, unambiguous language of a written contract are inadmissible. Parol evidence may only be admitted toexplain uncertain, incomplete or ambiguous terms.

Here, the terms of the written easement were clear, and evidence of an oral “side deal” that contradicted those written terms was inadmissible.

The fee interest in land over which a power company has been granted an easement remains with the party making the grant. The grantor-owner of the land retains the right to make any reasonable use of the land subject to the easement so long as that use is not inconsistent with the rights of the grantee.

In exercising the rights granted under an easement, a power company must follow the rule of reasonableness. In other words, the power company may not inflict unnecessary damage on the land and may not unreasonably increase the burden placed upon the servient tenement.

The Larews also maintained that there was a genuine issue of material fact concerning the reasonableness of Monongahela’s trimming. The circuit court held that “the easement permits Mon Power to exercise its own opinion in determining how much to trim to prevent the trees from interfering with the power lines” and that the rule of reasonableness stated in Kell v. Appalachian Power did not apply.

In Kell, the Court observed that the “fee interest in land over which a power company has been granted an easement remains in the party making the grant. The grantor-owner of the land retains the right to make any reasonable use of the land subject to the easementso long as that use is not inconsistent with the rights of the grantee.” 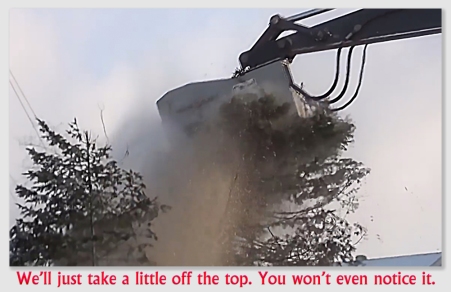 Thus, the Court said, in exercising the rights granted under an easement, a power company must follow the rule of reasonableness. It “may not inflict unnecessary damage on the land” and “may not unreasonably increase the burden placed upon the servient tenement.” In Kell, the Court held that the right given by the utility easement was “to cut and remove trees, overhanging branches or obstructions that endanger the safety, or interfere with the use, of the power company’s lines on the right-of-way granted by the indenture.”

Given the principles that Kell is predicated upon, the Court said, “we find that the circuit court erred in holding that as a matter of law, the appellees were not subject to the reasonableness rule of Kell. [Monongahela’s] right is limited to the removal of that which endangers the safety, or interferes with the use of the power company’s lines on the right-of-way and any removal must be done “in a reasonable manner, with due regard to the rights of all the parties.”

Because there is a genuine question of material fact concerning whether the power company unreasonably increased the burden on the Larews’ property when it exercised its rights under the easement, and whether Monongahela limited the trimming to that necessary to assure the safety and continued use of the power company’s lines, summary judgment should not have been granted.