Dick, Jane and Mom have fun at the Zoo … as long as they can dodge the falling trees.

Simon and Garfunkel told us that the monkeys stood for honesty, the giraffes were insincere, and the elephants were kindly but dumb. We don’t know about that, but they were right when they sang that “it’s all happening at the zoo.”

Just ask Ms. Cherney. She’d tell you that Simon and Garfunkel failed to mention were the ficus trees. One ficus at the Zoo — the North Carolina Zoological Park — fell on poor Ms. Cherney, injuring her. That began an eight-year legal odyssey through the North Carolina legal system, through the Industrial Commission (which hears tort claims made against the state), the Court of Appeal, the Supreme Court, back to the Commission, and again to the courts.

In the penultimate chapter, the North Carolina Court of Appeals ruled that Cherney had no evidence that the Zoo personnel had any basis to believe the ficus was about to fall. Of course, the evidence also suggested that the whole idea of having a ficus growing too large in an indoor setting and not being properly maintained was rather daft. And whose fault was that? The beavers, perhaps?

A dissenting judge vigorously disputed this, pointing out that the tree had been cabled to a wall to help support it. The very fact that the Zoo believed that cables were needed was evidence that they knew the tree was a hazard, the dissenter argued.

Usually, dissenting opinions are curiosities, but little more. On three-judge appellate panels, 2-1 majorities carry the day. Despite the fact the dissenter probably thought he was talking to himself, he nonetheless explained in detail how the record supported finding the Zoo liable. This time, however, the dissenting judge found that he had some fans – the justices on the North Carolina Supreme Court.

The Supremes reversed the Court of Appeals in a terse per curiam opinion (that means “by the court”) agreeing with Judge Wynn’s analysis.

This kind of thinking does raise a conundrum. Bracing or cabling a tree is a well-established practice in arboriculture. There’s even an ANSI standard for it. Could it be that cabling a tree may be prudent from an arboriculture standpoint but legally dangerous? A careful tree professional would probably take from this decision the notion that he or she would be well advised to tell any client for whom a tree is cabled or braced that the very fact the tree was braced means it should be considered to be a hazard tree. That of course would bring with it responsibilities for regular inspection and – just ask Ms. Cherney – notice to people who could be affected if the tree falls.

Cherney v. North Carolina Zoological Park, 648 S.E.2d 242 (N.C.App., Aug. 7, 2007), reversed, 362 N.C. 223, 657 S.E.2d 352 (N.C. Supreme Court, 2008). Tinya Cherney was in the enclosed African Pavilion at the North Carolina Zoological Park near the center when a large ficus tree fell hitting a palm tree. Both trees then fell on her, pinning her to the floor of the walkway in the African Pavilion. The impact caused vertigo, broke her right femur, cracked three ribs, broke her back and wrenched her knee.

The injury occurred because the ficus tree — which was indoors – had been permitted to grow too large for its roots, or alternatively, had not been properly maintained to prevent it from becoming unsafe. The ficus tree was under the exclusive control of the Zoo’s personnel and not subject to wind or any other natural force. A hearing examiner at the North Carolina Industrial Commission awarded Cherney $500,000 in damages. Unhappy at the result, the Zoo appealed. 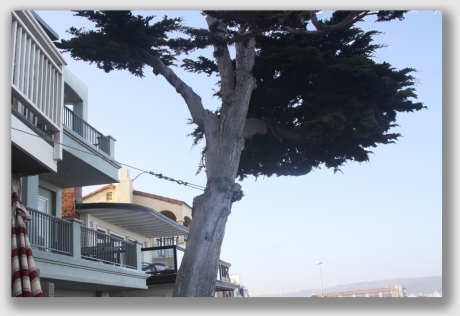 If your tree needs to be cabled like this, that could mean it’s time to let it go – preferably not onto a passerby.

The Court of Appeals held that the Commission’s second decision denying Cherney’s claim was proper, even though the Supreme Court had ruled in her favor on her appeal from first decision of the Commission denying her claim. The Court of Appeals agreed with the Commission’s finding that the evidence showed that neither the zoo’s curator of horticulture nor her staff knew or should have known that the ficus tree that fell in the zoo exhibit was likely to fall, and that there was no showing that any member of the curator’s staff violated any applicable standard of care.

In a carefully-crafted dissent, Judge Wynn observed that the evidence showed that when the ficus tree was replanted, “six, seven-strand 3/8 ” cables going in four directions were looped around the tree and attached to the planter walls” in order “to aid the tree in keeping it upright and to assist in monitoring the tree.” The cables were inspected monthly by the Zoo staff. Two of the four cables had snapped when the tree fell on Ms. Cherney. The judge argued that the “very fact that the tree was cabled to the planter walls illustrates that the Zoo and its employees had “express or implied knowledge” that the tree might fall; if there had been no danger, then the tree would not have needed to be cabled in such a fashion, nor would the Zoo employees have needed to monitor it so closely.” 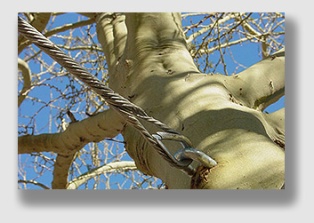 The dissent argued that the question was not whether the tree was likely to fall, as the Commission thought it was. Rather, the issue was whether a Zoo visitor such as Ms. Cherney or one of the tens of thousands of kids who passed through each year – was unnecessarily exposed to danger and was not warned of a hidden hazard. The dissent believed that they were, and the Zoo had a duty to warn visitors of the possibility that the tree might fall.

The North Carolina Supreme Court reversed the appellate panel, and specifically adopted Judge Wynn’s reasoning as its basis for doing so.