WHOSE TREES ARE THEY? 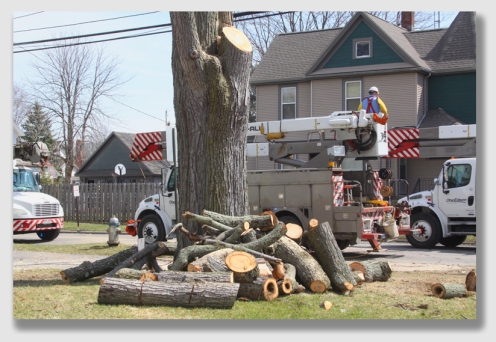 No issue of property ownership may be more misunderstood than the question of who owns the tree lawn, sometimes called the boulevard lawn, that strip of land between your front sidewalk and the street.

The confusion was illustrated recently by our reader Joel, who wanted the city to remove a dead tree on his tree lawn. He had always just understood that the tree lawn wasn’t his, and that he couldn’t cut or trim the trees growing there. We straightened him out, but a lot of uncertainty remains.

In today’s case, homeowners Gene and Joan Foote knew the tree lawn was theirs, but their failure to appreciate the limits of their rights led to a suit against the city. It seems that the city was improving the street, and its plan included the removal of four trees from the Foote’s tree lawn. The homeowners demanded compensation, arguing that the city’s removal of the beautiful trees amounts to a “taking” of property under the 5th Amendment, a “taking” for which they must be paid. A trial court agreed with them.

The Minnesota Supreme Court reversed the decision. It explained that the Footes, like any owner, was entitled to use all of his or her property right to the centerline of the street. However, the property was owned subject to a public easement (that’s why a deed always says “subject to all legal highways, easements and other restrictions of record”). In other words, the owner’s use of the land had to yield to the public easement of the highway.

Here, the city was merely using more of its highway right-of-way by expanding the street. As long as it remained within the bounds of its easement — which usually extends beyond pavement for a distance — the city could remove trees and other of the owner’s property to the extent needed for the public’s enjoyment of the easement. The removal of the trees let the public enjoy the easement, and no money was due the property owner because of it.

Some road-widening projects can get quite close to buildings. Be sure to check on the width of the highway easement before you build.

How wide is the right-of-way? It depends on the state you live in and size of the street. If you have questions, you could check with your local government’s engineering department. Or your lawyer.

Lawyers love to answer questions. Usually for a fee.

Foote v. City of Crosby, 306 N.W.2d 883 (Sup.Ct. Minn. 1981). Gene and Joan Foote owned a home in the City of Crosby. The platted right-of-way of the street in front of the home, Cross Avenue, was 80 feet wide and extended to approximately 6 inches from the front steps of the house.

The center 32 feet of the right-of-way was paved. Next to the pavement is a 10-foot wide grassy boulevard, and then a 4-foot sidewalk. On the boulevard were four large healthy elm trees which had been maintained by the Footes. Although the trees had cracked and heaved the sidewalk, there had been no complaints that the trees impeded foot travel, nor had the trees interfered with motorized travel.

The city began an extensive municipal improvement project prompted by the need for storm sewers, including a new lateral line under Cross Avenue. To provide proper grade for drainage, Cross Avenue would be torn up entirely, a plan which called for removal of the four trees, because root cutting necessary to accommodate them to the change in grade and repositioning of the curb and sidewalk would likely kill them. The Footes sued for an injunction, arguing the city couldn’t cut the trees without paying them compensation. The district court granted the injunction, and the city appealed.

Held: The injunction was dissolved. The Court observed that the owner of property abutting a right-of-way for public travel had the right to use his one half of roadway in any manner compatible with use by public of its easement. Any encroachment on the public right-of-way must be clearly obstruction to public easement before municipality may remove it without an adjudication that it was in fact an obstruction.

The Footes were not entitled to compensation for removal of trees within public right-of-way, the Court ruled, although they had a property right in the trees, because the taking was pursuant to a project which was a proper exercise of police power and encompassed a public purpose, and removal of trees was necessary to implementation of the project. After all, the Court said, the removal of the boulevard trees within the platted right-of-way was necessary to the street improvement project, and if not removed, the trees would clearly obstruct the public’s easement of travel.