Not Bullwinkle – Moose River is named for a generic moose, we understand.

With the autumn leaves  popping, it’s a perfect time to drive up U.S. Route 201 a pretty good way, up past Jackman and Wood Pond. There, you’ll happen on beautiful little Moose River, Maine, population 219. Located about 10 miles as the crow flies from the Canadian border, the little town is everything simple and natural that a harried city dweller could imagine about such a bucolic place.

Being a little backwater has some disadvantages. Too small for municipal buildings, the town officials are expected to greet the public and transact the town’s business from their homes. That’s what Elizabeth Bell, the town clerk, did. One January day in 2004, Linda Rodriguez – who had just moved there from Arizona and perhaps was unfamiliar with the concept of winter – was leaving Elizabeth’s home cum office when she slipped on the steps. Unfortunately, the handrail was missing. Liz had noticed it was wobbly, and her hubby removed it for repair. Being a spouse of the male persuasion, he hadn’t quite gotten around to fix it yet. The playoffs were on the weekend before, you know.

Liz didn’t have homeowners’ insurance against claims for personal injury because she believed “neighbors don’t sue… neighbors.” Sadly, it turned out that some of them – the ones from Arizona – do. Liz defended by claiming that she was protected by governmental employee immunity. The Town, on the other hand, argued it was her house, and the Town had no control over it, so it had no liability. Even in friendly small towns in rural Maine, it’s “every dog for himself” when the subpoenas start flying.

Ms. Rodriguez – having just moved in from sunny and hot Arizona – apparently was surprised to find the white stuff was slippery.

The trial court found that Liz was not immune from liability but the Town was. On appeal, the Maine Supreme Court agreed that her failure to replace the handrail had nothing to do with her government function. As for the Town, the Court said, like it or not, Liz’s place was a public building and the Town could be liable for negligence. And judging from the comments on the news report, some Maine residents see it as another case of “flatlanders” messing things up in Maine.

Rodriguez v. Town of Moose River, 922 A.2d 484 (Sup.Ct. Me., 2007). The Town of Moose River has a population of about 230 residents. Like other small towns in Maine, the Town does not own an office building suitable for conducting Town business. As a condition for holding office, the Town required the town clerk to conduct official duties at her personal residence. The Town conducts its selectmen’s meetings at a selectman’s home.

In March 2000, Elizabeth Bell was elected town clerk and tax collector. Accordingly, she opened her home to the public to conduct Town business. The Town brought its computer, file cabinets, desk, and office supplies to Liz’s home. She placed a sign on the side of her house, which read, “Moose River Town Clerk and Tax Collector.” Shel received about $300 per month as compensation for her work for the Town. During an average year, approximately 200 people would enter her home to conduct Town business. 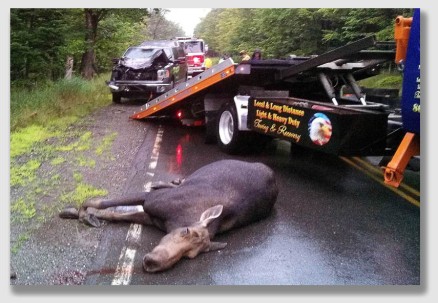 Moose River is used to different day-to-day hazards than steps without handrails.

On January 23, 2004, newcomer Linda Rodriguez went to Liz’s home with her husband and two children to register two motor vehicles. She had called Liz beforehand to schedule the appointment. There was some snow and ice on the sides of the steps leading into the Bell home, but the middle of the steps was clear. During the registration process, Linda had to leave the home office to retrieve her checkbook. After conducting her business, Linda exited the home carrying one of her children in a car seat. She fell when she stepped down to the middle cement step outside, injuring her leg as a result of the fall.

Prior to Linda’s fall, there had been a handrail on Bell front steps. Liz’s husband had removed the handrail when he noticed that it was wiggling, but did not check with the Town before doing so. Linda sued Moose River and Liz, claiming they had been negligent in failing to properly maintain the Bell property. The trial court denied Liz’s motion for summary judgment, holding that she was entitled only to discretionary function immunity. The trial court granted the Town’s motion for summary judgment, finding that Liz’s residence was not a “public building” pursuant to the immunity exception of the Maine Tort Claims Act, 14 M.R.S. § 8104-A(2).

Liz and Linda both appealed.

Held: Liz was denied immunity, and the dismissal of the Town as a defendant was reversed.

The Maine Supreme Court said that whether discretionary function immunity applies depends on whether the challenged act, omission, or decision (1) necessarily involves a basic governmental policy, program or objective; (2) is essential to the realization or accomplishment of that policy, program, or objective as opposed to one which would not change the course or direction of them; and (3) requires the exercise of basic policy evaluation, judgment, and expertise on the part of the governmental agency involved. Of course, the governmental agency involved possesses the requisite constitutional, statutory, or lawful authority and duty to do or make the challenged act, omission, or decision.

The question with respect to Liz’s entitlement to discretionary function immunity, the Court said, was whether her failure to install or replace the handrail on her front steps constituted a discretionary act “reasonably encompassed” by her duties as the town clerk and tax collector. Generally, operational decisions, such as those regarding the safety or maintenance of premises, fall outside the scope of discretionary function immunity, unless those decisions serve some other government policy or purpose. Here, Liz’s decision on the handrail did not involve a basic governmental policy related to performing duties as the town clerk, was not an act essential to the realization or accomplishment of such a policy, and did not require her to exercise a policy evaluation, judgment, or expertise. Rather, her choice not to replace the handrail (or rather, her acquiescence in her husband’s sloth) resembled a decision ordinarily made by the general population, relating to the duty of care a landowner owes to the people who enter upon his or her property. Thus, she was not entitled to discretionary function immunity.

However, Liz was entitled to limited liability as a government employee. Pursuant to 14 M.R.S. §8104-D, the personal liability of an employee of a governmental entity for negligent acts or omissions within the course and scope of employment are subject to a limit of $10,000 for any claims arising out of a single occurrence. Because she was required to open her home to the public as part of her duties as town clerk and tax collector, the Court found, Liz’s failure to replace the handrail on her stairs was an act within the scope of her employment.

As for the Town, the Maine Tort Claim Act holds that governmental entities are liable for negligent acts or omissions in the construction, operation or maintenance of any public building or the appurtenances to any public building. For all intents and purposes, the Court said, Liz’s home functioned as a public building as well as her private residence. By its plain meaning, a “public building” includes “[a] building that is accessible to the public.” Here, the residents of Moose River had no choice but to go to Bell’s home to perform legally necessary Town business, such as registering motor vehicles and paying taxes. Liz put a sign on her home, allowed residents to come into her home to conduct official Town business, and did not restrict her hours of service. The Court concluded that on the specific facts of this case, her home was a “public building” within the meaning of the Tort Claims Act.