I CAN’T SEE FOR MILES AND MILES…

Here’s a strange little case from Big Sky Country. Landowner Wilber (who, if we read between the lines correctly, was an impatient man who preferred to reap that which he did not sow, if you get our meaning) was unhappy that his downhill neighbor had a tree which had grown tall, and thus interfered with his view.

Wilbur found a lawyer, to whom he complained, “I can’t see for miles.” The lawyer, Who was happy enough to take Wilbur’s money, whispered delusions of legal grandeur in Wilbur’s ear. “If the neighbors’ tree kept you from seeing the July 4th fireworks,” the attorney whispered, “then the tree is a nuisance. And if the neighbors did not remove the tree to suit you, then they’re malicious! If the tree is overhanging your yard, your neighbors are trespassers!”

Believing his highly-paid but under-informed counsel, Wilbur sued. The trial court bounced the suit, because (1) Wilbur had no common-law right to a view; (2) a naturally growing tree cannot be a nuisance; and (3) the neighbors are not trespassers because their tree’s roots and branches have encroached.

Wilbur appealed, and at last the Montana Supreme Court heard the case. And that’s where the strangeness arose. The Supreme Court agreed that Wilbur had no right to a view, and that the healthy, naturally growing tree was no nuisance. But it held that Wilbur’s trespass claim, because the tree was encroaching, had been adequately pled and would survive early dismissal.

We tend to think that the Court agreed only that Wilbur’s claim that the neighbors had caused the tree to encroach was, if true, a good claim. If Montana suggests that a tree’s encroachment itself constitutes a trespass if an owner does not take active steps to stop the encroachment, the holding goes far beyond even the Hawaii Rule or Fancher v. Fagella.

If, on the other hand, Montana suggests that such encroachment, if not halted by an owner with knowledge of the encroachment and damage to the property of another, is trespass, this may be not a lot different than the Hawaii Rule, just worded differently. After all, an encroaching tree that damages the neighbor’s property may well be a nuisance. Trespass or nuisance, the responsible landowner is liable for the damage. That is how the Hawaii Rule operates. 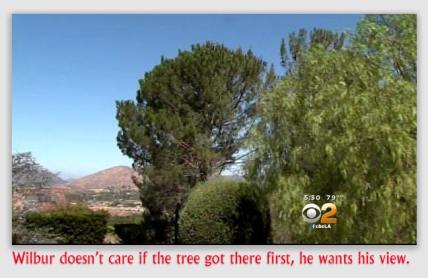 The Artises had a tree, a nice large tree that had grown over the years so that it blocked a substantial portion of Wilbur’s view of the city, valley and mountains. In fact, horror of horrors, on Independence Day 2010, for example, Wilbur and his guest could see virtually none of the South Gate Mall fireworks display solely because of the Artis tree blocking the view. Wilbur said the tree’s obstruction of his views was “offensive to his senses, was an infringement upon the free use of his property, interfered with his comfortable enjoyment of his property, and diminished the aesthetic and monetary value of his property.” He said the tree was a nuisance, and in fact the Artises intended that it be a nuisance.

The Artises had tried to accommodate. Wilbur admitted that after he contacted them about the tree, they had “cut a few branches from the tree,” but he nonetheless asserted that Artises “know their tree is growing over the fence onto Wilbur’s property and is buckling his fence, but refuse to do anything to stop it; that such trespass is continuing.”

Finally, alleging that Artises had notice and knowledge of the alleged facts, Wilbur accuses them of actual malice, and demands punitive damages.

Artises filed a motion to dismiss the complaint, arguing that a naturally growing tree is not a nuisance or trespass as a matter of law. The district court agreed, and dismissed Wilbur’s feverish litany of abuse.

Held: Wilbur had no right to an unobstructed view, and a naturally growing tree cannot constitute a nuisance. However, Wilbur had adequately pled a trespass because he claimed the tree was encroaching and the Artises knew it.

The statutory definition of nuisance provides that anything which is injurious to health, indecent or offensive to the senses, or an obstruction to the free use of property, so as to interfere with the comfortable enjoyment of life or property, is a nuisance.” Section 27-30-101(1), MCA (2009). While it is possible under § 27-30-101(1), MCA, for anything to constitute a nuisance, a nuisance claim must nonetheless plead a factual foundation that satisfies governing legal standards. “A nuisance action may be based upon conduct of a defendant that is either intentional, negligent, reckless, or ultrahazardous,” the Court said. A nuisance may either be a nuisance per se or a nuisance per accidens. A nuisance per se or at law is an inherently injurious act, occupation, or structure that is a nuisance at all times and under any circumstances, without regard to location or surroundings. A nuisance per accidens or in fact “is one which becomes a nuisance by virtue of circumstances and surroundings.”

Likewise, the Court said, a nuisance may also be classified as either absolute or qualified. An absolute nuisance is ” a nuisance, the substance… of which is not negligence, which obviously exposes another to probable injury.” A qualified nuisance, on the other hand, is a nuisance dependent on negligence that consists of anything lawfully but so negligently or carelessly done or permitted as to create a potential and unreasonable risk of harm, which, in due course, results in injury to another.

Montana law has never held that a nuisance claim would lie for any obstruction of view whatsoever. Here, Wilbur alleges that a tree, in the course of its natural growth, has risen tall enough to obstruct his view. Although the complaint broadly claims that Artises’ tree has reduced the aesthetic and monetary value of Wilbur’sproperty, interfered with his comfortable enjoyment of his property, and offended his senses, the entire factual basis of the claim is that a tree has obstructed his view because of natural growth. The assertion that Artises’ naturally growing tree has obstructed Wilbur’s view does not constitute, as a matter of law, “conduct of a defendant that is either intentional, negligent, reckless, or ultrahazardous,” the Court said, or “an inherently injurious act or a condition which “obviously exposes another to probable injury.” The District Court properly granted the Artises’ motion to dismiss Martin’s nuisance claim.

The trespass is another matter, the Court held. Trespass is “the entry of another person or thing obstructs a property owner’s exclusive possession. A party need not establish actual harm or damages in a traditional trespass action.” One is subject to liability to another for trespass, irrespective of whether he thereby causes harm to any legally protected interest of the other, if he intentionally (a) enters land in possession of the other, or causes a thing or third person to do so, or (b) remains on the land, or (c) fails to remove from the land a thing which he is under a duty to remove.

The “intent” element of trespass is fulfilled when an actor desires to cause consequence of his act, or when he believes that the consequences are substantially certain to result from his act. Here, the Court said, Wilbur’s complaint alleges a trespass because the Artises’ tree extends over the shared fence and the roots grow onto his property. The complaint alleges that the roots of the tree have damaged Wlbur’s property. Regarding intent, Wilbur claims alleges that the Artises “know their tree is growing over the fence onto the property and is buckling his fence but refuse to do anything to stop it,” that Artises’ conduct is motivated by malice or is in willful, wanton and reckless disregard of Wilburs’ rights,” and that Artises are guilty of actual malice “because they had notice and knowledge of the alleged facts.”

Although the Artises argue that Wilbur’s complaint fails to plead an intention to trespass by way of their tree, the Supreme Court concluded that, “for purposes of a M.R.Civ.P. 12(b)(6) motion to dismiss, intent was adequately pled.”