HE SAID, SHE SAID… 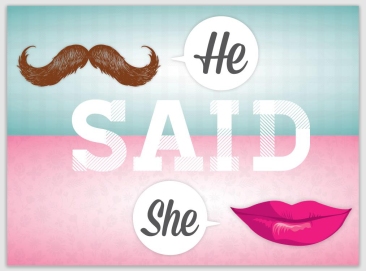 This is probably the right time, what with the “I know what you did in high school” drama being played out in Washington, to run with our own “he said, she said” case, a peculiar turn-of-the-last-century trespass to timber case from New Jersey.

The defendant farmer was accused of trespassing onto the plaintiff’s land without permission and cutting down 32 trees. He said he only cut 13 trees, and anyway, he had permission from the plaintiff’s father (the plaintiff being a fair damsel who, back then, couldn’t be worrying her pretty little head about real property management).

It seemed pretty clear that the jury bought the plaintiff’s version of events. The damages awarded could not have been for just 13 trees, implying the jury must have believed that Farmer Ruddy had taken all 32. The fact that the jury found a trespass meant that it necessarily disbelieved Farmer Ruddy’s story about looking at the trees with plaintiff’s father and making a deal.

If Farmer Ruddy did not have permission (as the jury found he did not), then his entire story about walking the boundary with Ms. Hollister’s father was a woof story. And necessarily, then, Farmer Ruddy’s conduct in trespassing and taking the trees was wanton and malicious.

The court of appeals was simply substituting its own conclusions for those of the jury, rewriting the verdict as best it could by reducing the damages by about half.

This is not only an old decision, it’s an awful one. The Court may have been swayed by George Ruddy’s motive, to remove shade from his field and thereby make it more productive. It may have preferred George’s detailed testimony over getting permission to plaintiff Minnie Hollister’s dad, whose hot denials may have sounded hollow. It may have figured that some woods belonging to a mere girl should not be favored over a field owned by a man.

Who knows (but the Court)? The point is, those conclusions are factual, and in this country, findings of fact are made by the jury, not an appeals court. This is raw judicial encroachment on the jury function, 19th-century style.

And some think that judicial activism is a recent phenomenon.

Hollister v. Ruddy, 66 N.J.L. 68 (N.J. 1901). Farmer George Ruddy had a problem. Minnie Hollister’s trees that stood along the boundary with his field threw so much shade that a healthy part of the cropland was not healthy at all. George cut down some trees, the exact number being an issue, some of which were boundary trees.

Minnie claimed that George had no permission to remove any trees at all. George testified that he had obtained permission from Minnie’s father, who had authority to approve tree removal. George gave convincing testimony that he had driven the elder Hollister from town to the field, that they discussed the trees and shade problems they caused, that the trees were only fit for firewood, and that George even offered to sell the wood and give all of the proceeds to Minnie (because his only interest was in making the field more productive). Farmer Ruddy said he had cut only 13 trees on the boundary, not the 32 trees Minnie claimed were gone.

No matter. The jury believed Minnie Hollister, and found that George had trespassed. Miss Minnie recovered $400.00 in damages to the trees, and punitive damages of $350. George appealed.

Held: Minnie was not due any punitive damages.

The trial court had instructed the jury that after it figured out the value of the timber that was improperly taken, “if you believe that the action of this defendant, in entering upon the plaintiff’s land and cutting the trees, was wanton, willful and malicious, and that he meant to take property that he knew was not his own, and cut down the trees maliciously and carried them away without the plaintiff’s knowledge or consent, you may add such damages as you think is proper punishment for a man who willfully does an illegal act of trespass of that character.”

The court of appeals agreed with the jury instruction, but found that the clear weight of the evidence showed that Farmer Ruddy had not cut or authorized the cutting of more than the 13 trees that stood on or near the boundary line, and that the trees he cut were fit only to be cut for cordwood. Their value, based on the trial court testimony, was about $20.00. But even if the jury thought that George Ruddy had cut all 32 trees, the most they could have been worth was about $400.00. So plainly, the appellate court concluded, the jury must have allowed punitive damages.

The Court ruled that the right to award punitive damages rests, primarily, upon a single ground – wrongful motive. But here, the Court said, there was no competent evidence that George had authorized the cutting of anything more than the trees on or along the boundary line, and he claimed that his reason for cutting those was that they shaded his field so as to prevent the raising of full crops. He also claimed that he had procured permission from the elder Hollister, who was in charge of the property, for the cutting of those trees, although Mr. Hollister hotly denied this. 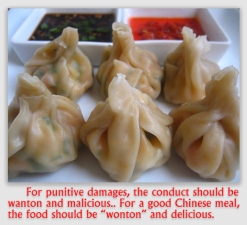 The Court conceded that “the verdict determined that permission was not given, and on that point alone we would not disturb it; but it seems to us quite plain that the jury were not justified in finding the defendant’s conduct wanton or malicious. Without conceding that for a mere trespass on lands and the cutting of trees that have no special value in themselves, and the cutting of which inflicts no peculiar injury on the landowner, punitive damages can ever be properly awarded, we see no ground for their allowance on the testimony above cited.”

The Court characterized the trespass case as “an honest dispute as to permission for the act found to be a trespass. It is true that some of the trees cut were exactly on the boundary line, and it is argued that that fact gave them a peculiar value. No such value was contended for or submitted to the jury. The line was not obliterated, for the stumps of the trees remained in the earth, and the line itself was shown by a post and wire fence, which, though considerably fallen into decay, still left the boundary line between the parties clearly discernible. There was no peculiar injury or any indignity inflicted on the plaintiff. It will be enough if she gets just compensation, which, of course, may include the value, if any, of any of the trees as line trees.”