The other day, we found ourselves reading a fascinating brief – and only a lawyer can employ the adjective “fascinating” to describe the noun “brief” – that argued against what the writer called the “common-hedge rule.” Under the common-hedge rule, the argument went, vegetation growing on or near a boundary might be regarded as property held in common, meaning that adjoining landowners would have to protect the vegetation from harm.

To the initiated among us (and because you’re reading this, you are among the initiated), this merely sounds like something close to the rule in Rhodig v. Keck. To the brief writer, however, the common-hedge rule was an un-American mischief-maker that would spawn vexatious litigation, engender confusion, and threaten the freedom-loving people of Earth. What was worse, the writer argued, it would interfere with the first prong of the Massachusetts Rule (that is, the doctrine that a landowner may trim overhanging branches and encroaching roots up to his or her property boundary).

Alas, the brief was for naught: the case in which it was filed, an Arizona hedge encroachment action, was decided on an arcane procedural question regarding the timeliness of a post-judgment motion under Arizona Civil Rule 60(c)(1). But the whole notion of a “common-hedge rule” was interesting.

But on closer examination, the common-hedge rule appears to be nothing special, at least, nothing we could not divine with what we know of the Massachusetts Rule and boundary-tree law. The highlights:

First, a person on whose land a hedge is located is the owner of it, although the roots and branches thereof extend into and over a neighbor’s land.

Second, a landowner whose property is invaded by the boughs of a hedge growing on adjoining premises may cut them at the point where they enter her property. However, the fact that a landowner trims branches overhanging her property from a hedge growing on an adjoining landowner’s land is not evidence that she has any ownership in the hedge, or that it is a boundary between the properties.

Third, if a hedge constitutes a boundary between adjoining lands, it is the common property of the owners of the lands, but neither has a right to cut, injure, or destroy the hedge without permission of the other.

This is pretty basic stuff. It appears the rules we know and love will apply whether the vegetation in question is a tree, a hedge or even a beanstalk.

Jurgens v. Wiese, 151 Neb. 549 (Supreme Court of Nebraska, 1949). Martin and Anna Jurgens sued John and Tena Wiese to stop them from destroying a hedge located entirely on the south boundary of the Jurgens’ and Wieses’ properties, and for damages suffered because of John’s partial cutting of the hedge.

The Jurgens and the Wieses (and the people who owned the properties before them) had for more than 10 years recognized the boundary between their lands to be the center of the hedge. The Wieses trimmed it on their side, not claiming to own the whole thing but rather just the part they trimmed.

The trial court found that the row of hedge trees was completely on the Jurgens’ land, awarded them damages interfering with the hedge. The Wieses appealed.

The hedge had been there about 78 years. The owner prior to the Jurgens, John Lenners, maintained the hedge and claimed it was his. In about 1936, John complained he was running into trouble with Lenners, and said, “I want to take that hedge from the old gentleman.” When Lenners died, the Jurgens bought the western 133 acres of the property.

John’s father, George, had owned John’s tract previously. George never made any claim to the hedge, but he did complain that it was too close to the line. More than 30 years before the trial, George said, “To my notion it ain’t right. Lenners has got that big hedge so close… it is damaging my land…. by sapping and they had to go along it every so often and cut branches.” 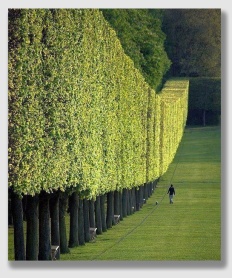 After John and Tena acquired the land, they did not any claim that the hedge was on their land or that it was on the boundary line, but they did complain that the hedge was sapping his ground and causing damage. After the Jurgens bought their land, John told Martin he could get “damage off you” because the hedge damaged his land, and that he wanted to have some damage for the injury done his land. The hedge was so close to the line, he said, it sapped some of his ground. When Martin asked him how much he wanted, John said, “Half of it.”

Held: The hedge belonged to the Jurgens, but John and Tena were entitled to trim the part that overhung their property.

The Supreme Court found that the hedge clearly was planted and the trunks of the trees within the hedge were wholly upon the Jurgenses’ land. The Court said the hedge was the Jurgenses’ property, and no part of it has ever been owned by the Wieses. The Court held that ownership of trees standing wholly on the land of one owner, although their roots or branches extend into or over the land of another, is vested in the person on whose land the trees stand, and the adjoining owner has no property in them.

The fact that the Wieses trimmed branches from trees and the hedge which extended over their property was not evidence that they had any interest in or ownership of any part of the hedge, the Court held. One whose property is invaded by the boughs of trees growing on adjoining premises, the Court ruled, may cut them at the point where they enter his property. The act of cutting the branches to the extent they have entered the adjoining property is the exercise of a right, but it is not evidence of the ownership of a tree or trees from which the branches grew.

The Wieses admitted they were cutting the hedge but claimed they were cutting within their legal rights thereby to protect their property in it, that they were the owners of at least one-half of it. They had cut about 20 yards of the hedge and more than 20 hedge trees, and were continuing to cut the hedge at the time the suit was filed. Because a substantial portion of the hedge they cut was on Jurgens land, an injunction was a proper remedy. One who has trespassed upon the land of another, and threatens to continue such trespass may be enjoined from so doing. The owner of real estate is not required to permit the devastation of his hedge by a trespasser and seek relief in an action at law for damages, the Court said, but instead may resort to an action to prevent such trespasses.