More and more home developments deliver to their residents not just houses, but a particular ambience, one which remains free of eyesores like sheds, clotheslines, and even colors of exterior trim and paint that are deemed outside the color scheme of the place. These restrictions are often contained in the deeds conveying ownership of the homes. And quite often, the restrictions begin to be violated before the ink is dry.

Many of the violations are slight, not worth the time of the neighbors or associations charged with enforcing the restrictions. But someone usually pushes things too far, and then defends himself or herself in court by complaining that Joe Doaks or Jane Doe down the street violated the same restriction, too, and no one complained about it.

In today’s case, an Ohio dog-trainer tries the same excuse when the homeowners’ association tries to shut down his obedience school.

It’s like complaining to a cop that everyone is speeding, making his actions stopping you somehow … well, unfair. Like President Carter told us once, “Life is unfair.” And so is selective enforcement. But that doesn’t mean that you can’t do it.

Here, the Court told Marchus that what mattered wasn’t whether other people were getting away with violating the covenants. What matter was whether there was a “substantial value” the restriction which should be protected. Where substantial value could be found, equity will enforce a restrictive covenant. No matter who else is violating it.

The guy down the street is selling on eBay for a living? Once a day, he loads his pickup truck with small boxes and goes to the post office? There’s probably no “substantial value” being offended. But Mr. Marchus’s baying hounds? Customers and their masters were driving in and out all day long on the private road?  The other property owners were worried about wear and tear on the road, the congestion, and liability for accidents. Those concerns were legitimate.

The Court refused to let the neighborhood go to the dogs.

The developers drafted specific land use restrictions which were attached to each deed, restrictions intended to preserve the rustic character of the land while permitting property owners to operate a home-based business without detracting from the rural atmosphere. Section I(A) of the Declaration of Restrictions provides that “no commercial or institutional activity shall be conducted on these lots, which is not wholly contained within the residential dwellings or which causes damage to the private gravel drive by heavy vehicles.” The Bylaws for the Homeowners Association incorporate the restrictions. 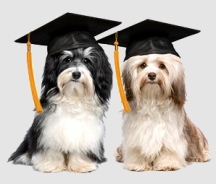 Over the years, various owners operated home-based businesses from their Rockwood Estates residences, including a pest control business, a security systems business, a log home business and a tree maintenance business. In September 2001, one owner, Dick Marchus, built a 60′ x 80′ building to be used as a dog training facility. After it was done, his wife ran her dog training business in the new outbuilding, conducting one class on Monday and two classes per day from Tuesday through Saturday. While some attendees would arrive with two or three dogs, she limited the commercial vehicle traffic to ten cars per class.

Almost immediately, the Association sought an injunction to keep Marchus from continuing operation of the commercial activities from the outbuilding, on the grounds that the activity violated the covenant. The Marchuses answered and counterclaimed. At trial, the Association argued Marchus’s business was in violation of the restrictions. Marchus admitted the activities were not contained within the residential dwelling, but argued the restrictions had been waived or abandoned by the Association’s failure to enforce the restrictions against the past violations of other property/business owners. The trial court granted the injunction, and Marchus appealed.

Held:   The trial court’s injunction was affirmed. The Court of Appeals noted that restrictive covenants on the use of property are generally viewed with disfavor. However, this disfavor may be overcome by evidence of a plan or scheme into which the restrictions are incorporated and notice of that plan or scheme. A plan like the Rockwood one, designed to maintain the harmony and aesthetic balance of a community, will often be upheld where the restrictions are reasonable.

The evidence also showed that Marchus had notice of the restrictions. Consequently, the Court found, the restriction was valid and enforceable. As for waiver or abandonment, the Court said, the test was whether, under the circumstances, there remained a substantial value in such restriction which should to be protected. Where there was a substantial value to the dominant estate remaining to be protected, equity will enforce a restrictive covenant.

Even with the Marchuses’ restricting classes to only ten vehicles (leading to dog carpools, no doubt), it was still too much for the neighbors …

Here, the Court found, various residents expressed concerns they held since Greta Marchus opened the business. Increased traffic created congestion and destroyed the rural atmosphere of the development. Because the residents were responsible for the upkeep and maintenance of their private drive, some worried about the increased repair cost resulting from the wear and tear. Some were concerned about being exposed to liability if any of the Marchuses’ customers happened to be injured on the private road. The Court found that the concerns expressed were legitimate and rationally related to appellants’ violation of the covenant, and thus, there was still a substantial value in the restriction.

As for acquiescence, the evidence didn’t show that prior businesses operated anywhere but in the residences of the owners, something which was permitted by the restrictions.