WHAT KIND OF GUY WOULD SHOOT A DOG?

The crotchety old landowner should have known that he was good and screwed as soon as he got sued for shooting his neighbor’s hunting dogs. If he didn’t, he sure knew his goose was cooked when the Mississippi Supreme Court started its opinion with this:

“Many men, including this writer, feel that a person who has never seen squirrels jump from limb to limb in the deep swamp on a frosty Fall morning; or has never heard a wild turkey gobble in April or seen him strut during mating season; or has never watched a deer bound through the woods and fields, or heard a pack of hounds run a fox, or tree a coon; or has never hunted the rabbit, or flushed a covey of quail ahead of a pointed bird dog; or has never angled for bass or caught bream on a light line and rod, or taken catfish from a trotline and limb hook; has never lived.”

And screwed he was. To be sure, he had a real evidentiary problem, one that comes up all too often. A defendant knows there are no eyewitnesses, and he (or she) happily invokes what is generally known as the Bart Simpson defense: I didn’t do it, no one saw me do it, you can’t prove anything.” 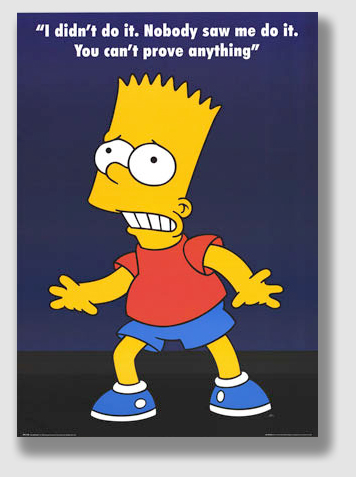 The defense didn’t work all that well for Bart, either.

The hunter’s dogs had run onto I.C. James’ place, and old I.C. (perhaps standing for “Incorrigible Curmudgeon”) didn’t think much of it. So he shot the dogs. And that, as they say, was an unfriendly act.

Old I.C. told Buddy Mabus, the dogs’ owner, that they had run onto his land, so he shot ‘em, and left ‘em “in a bad way.” He acted almost as though he was proud of what he had done. Well, the “mean old S-O-B” act might have given I.C. some visceral pleasure at the time, but it sure didn’t play well before a jury.

Unsurprisingly, by the time the case got to a jury trial, I.C. James had gotten his story straight. He never said he left the dogs in a bad way. In fact, he told the jury, the dogs had killed some of his waterfowl, but he didn’t tell Buddy or his son that, because they’d have just denied they owned the dogs. Apparently, I.C. James had found out by the time of trial that he didn’t have the right to kill the animals just because they had wandered onto his land, unless — and this is a big “unless” — they had killed some of his poultry. All of a sudden, that was his story.

I.C. figured he had the case licked. After all, no one could say the dogs hadn’t killed the ducks. The evidence against him was circumstantial at best. And we all know that circumstantial evidence is no good, something we learned at the Hollywood School of Law.

Except that circumstantial evidence is good evidence, and a jury is entitled to rely on it. In fact, nothing requires a jury to check its common sense at the courtroom door. This jury didn’t. It knew James’ “they killed my ducks, but I just didn’t mention that until now” recitation of events was nothing but — pardon the pun — a “woof” story. The Mabuses testified the dogs ran onto James’ property, gunshots came from that general direction, James then told them he had shot the dogs (but didn’t mention any dead ducks), and later, one dog turned up wounded and three others didn’t come home at all.

James argued all the way to the Mississippi Supreme Court that the jury had to find for him (or, for that matter, the trial court had to overrule the jury in a procedure known as “judgment n.o.v.”) because no one could disprove his statement that the dogs had killed some ducks. Or, as Bart put it, “I didn’t do it, no one saw me do it, you can’t prove anything.”

The jury thought otherwise, and the appellate court respected that.

This is circumstantial evidence that a woman with a child in a stroller happened by here (and that it had rained shortly before that time).

James v. Mabus, 574 So.2d 596 (Supreme Court of Mississippi, 1990). Buddy Mabus lives on a farm where he and his son, Terry, raise dogs which they use to track and run deer. On a cold morning in late November, Terry and Buddy — planning to hunt deer — turned their dogs loose about two hundred yards north of Buddy’s dog pen. The dogs jumped a deer and headed north towards I.C. James’ property, about two miles from where the dogs were turned loose. James had his land posted, and Buddy knew James didn’t allow hunting on his land.

At least two of their dogs ran onto James’ land. James said as stopped to open the gate to his pasture, he heard hunting dogs south of his place heading east. He listened for five or ten minutes and then saw his geese flying across his lake and heard his ducks making noise. He grabbed his rifle from behind his truck seat, pointed it out the window of the truck and drove through his pasture to the lake where he saw two dogs attacking his ducks. James shot at them, but did not know whether he hit them because they ran off.

He said he followed the dogs until they left his property.

Terry, on the other hand, said he had stopped about a half a mile east of James’ place and was listening to the dogs running toward the road when he heard the shots, then he heard only silence. Wondering about the sudden quiet, Terry drove to a gate to James’ property where he believed he had last heard the dogs. James came to the gate and told Terry he had shot the dogs. Terry asked what the dogs were doing, and James said, “They were on my land.” A short time later Terry found one of the dogs near the red gate nervous and shaking. Three days later another dog returned to Mabus’ land with three pellet shots in his hip. Two dogs never returned.

Buddy also said he heard the dogs as they crossed onto James’ land. Seconds after they crossed, he heard shots and then silence. After Buddy learned the dogs had been shot, he met Terry at James’ house. James told Buddy he shot the dogs because they were on his land, never mentioning at that time that the dogs had attacked his ducks or geese.

At trial James said he hadn’t mentioned to either of the Mabuses that the dogs had been attacking his ducks because if the Mabuses knew what the dogs had done, they would have denied ownership. The duck issue was important because Mississippi law gave James the right to shoot dogs if they were on his land attacking his waterfowl. James contended that he had seen two dead ducks and one crippled one. James’ daughter also testified that a few months after the incident she saw one dead duck and a crippled one by their pond.

At the close of the Mabuses’ case, James moved for a directed verdict on grounds that the Mabuses put on no proof that the dogs were dead or that James hit any dogs when he shot at them. The trial court denied James’ motion, finding that reasonable inferences could be drawn from the evidence.

The jury found for Buddy Mabus, and I.C. James appealed.

This muppet is a curmudgeon, too, but he hasn’t shot any dogs that we know of.

Held: The dog shooter had to pay. The Mississippi Supreme Court held that credibility and weight to be given to James’ testimony was a matter for the jury to determine. Here, the circumstantial evidence was sufficient to create a jury question as to whether the dogs ran onto the property owner’s land and were shot and injured or killed by the property owner, and the trial court did not abuse its discretion in denying motion for new trial.

The Court observed that inherently probable, reasonable, credible and trustworthy testimony – uncontradicted by other evidence – must be accepted as true. But appellate courts will give a jury great deference in its conclusions about the credibility and weight of testimony. In this case, determining whether to accept property owner James’ testimony that the hunters’ dogs had attacked his ducks or the Mabuses’ testimony was a matter for the jury to decide.

To be sure, verdicts must rest upon reasonable probabilities and not mere possibilities, but a verdict found on circumstantial evidence will stand unless it is opposed by a decided preponderance of evidence or is based on no evidence whatever. The Supreme Court said that whether there was any circumstantial evidence from which the jury reasonably could infer death or injury to Buddy’s dogs caused by James was a determination to be made by trial court, and the weight to give such evidence was for the jury. Here, there was plenty of circumstantial evidence that would let a jury conclude that Buddy’s dogs ran onto James’ land and were shot by James for that reason alone, despite James’ contention that the dogs were attacking his ducks (which would have given him a statutory right to shoot and kill them without liability).

As far as the trial court’s determination that the evidence was sufficient to support the verdict, all conflicts and all reasonable inferences from the testimony will be construed in favor of party who prevailed at jury trial, and the reviewing court will assume the jury drew every permissible inference from evidence offered in favor of the winning party. It appeared to the Supreme Court that the jury simply chose not to believe James’ assertion that the dogs were attacking his ducks.