When negligence rears its ugly head, compensation usually depends on the extent of the duty owed the victim by the party whose pocket the injured plaintiff seeks to pick. Take Tim Jones, an experienced cable television installer. One cold day in the bleak midwinter, he climbed an Indiana Bell pole to work on a cable installation. On the way down, he grabbed a phone line instead of a ladder rung. Not being intended as a support structure, the line gave way, and down Mr. Jones went.

Having no evidence that Indiana Bell knew the line was defective and likely to fall away from the pole, Mr. Jones did the only thing he could do – he sued anyway. The issue was a little daunting, because Indiana Bell hadn’t ever hired Mr. Jones. Instead, it just rented pole space to the cable company, which in turn hired the company that employed Jones. So what duty did the telephone company owe Jones in this totem-pole relationship?

Not that much of one, as it turned out. Mr. Jones lost his case, but the Court of Appeals took the opportunity to clarify the duty an easement holder has to invitees on the easement. The lesson is one that a utility holding an easement for, say, power lines, might owe to the employee of a tree-trimming service brought in to keep the easement clear of vegetation.

Jones v. Indiana Bell Telephone Co., 854 N.E.2d 1125 (Ind.App., 2007). Timothy Jones was doing a cable equipment upgrade for Sentry Cable, a cable TV provider. Jones – who had been doing this type of work for about twenty years and was aware of the associated dangers – was working as a subcontractor on this project. He was wearing the appropriate safety equipment. 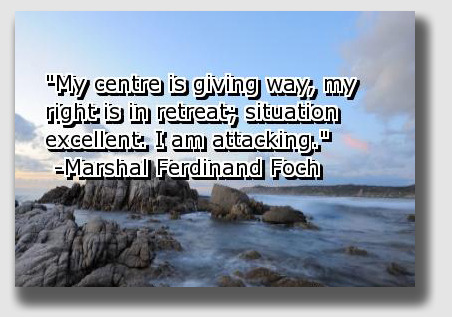 The plucky old Field Marshal might have been Jones’ lawyer in this case … but the legal attack on the easement holder failed nonetheless.

Jones climbed a telephone pole owned by Indiana Bell, in order to access the cable TV line, which was located about a foot above the telephone line. On his way down, he grabbed the telephone line like it was a ladder rung. It wasn’t. It broke free, and Jones fell 20 feet to the ground, breaking his ankle. Jones sued the phone company for negligence.

At trial, Jones admitted he hadn’t observed any problems with either the telephone line or the clamp assembly. He also admitted he had no evidence that Indiana Bell knew that there was anything wrong with the pole, telephone line, or clamp assembly. Indiana Bell moved for judgment “based upon the … absence of any evidence of a breach of duty as the duty is established in Indiana law.” The trial court found Indiana Bell had no duty to Jones, and granted judgment to the phone company.

The Court observed that to prevail on a theory of negligence, Jones had to show Indiana Bell owed him a duty, it breached the duty, and his injuries were caused by the breach. Whether a defendant owes a duty of care to a plaintiff is a question of law for the court to decide. Whether an act or omission is a breach of one’s duty is generally a question of fact for the jury, but it can be a question of law where the facts are undisputed and only a single inference can be drawn from those facts.

The parties and the Court focused on the Indiana Supreme Court’s opinion in Sowers v. Tri-County Telephone Co., which involved a telephone utility, the employee of an independent contractor, and a discussion of both duty and breach. In Sowers, the telephone company hired Covered Bridge Tree Service to trim trees located near its telephone lines and clear a right of way in order to ease the work of crews mounting cable television lines on the same poles. While trimming trees, a Covered Bridge employee fell into an abandoned manhole.

The phone company did not own the land on which the manhole was located, but it had a prescriptive easement on the land. Sowers sued Tri-County for negligence, and the trial court granted summary judgment in favor of Tri-County. The Sowers court held that a landowner or occupier is under a duty to exercise reasonable care for the protection of business invitees and that the employees of independent contractors are business invitees. The court held that Tri-County did not have a duty to inspect and warn and that the boundaries of Tri-County’s duty of reasonable care to its business invitees “must be defined from the utility’s own use of the easement.”

But here, the Court said, the facts of Sowers were distinguishable (which means that they make the case different, not that there was anything especially celebratory about them). There, the telephone utility itself hired the tree service company, whose employee was then injured while on the telephone utility’s easement. Here, Indiana Bell just rented space on its telephone poles to the cable company, whose subcontractor was then injured on Indiana Bell’s telephone pole. Still, the Court said, the policy reasons articulated in Sowers apply to this case, making the duties owed the same. Sowers first acknowledged that a telephone utility is a special breed in that it is not a traditional landowner or occupier. In addition, it acknowledged that a telephone utility does not often access its property except for the occasional necessity to effect repairs. Because of these facts, Sowers concluded that a great burden would be placed on a telephone utility if it were required to conduct regular inspections of its property for the sole purpose of discovering possible hazards.