THE ONLY THING THAT STINKS IS THE PLAINTIFF’S CASE

P.J. had a live-in girlfriend named Callie. As near as anyone could tell, she did not pay to live there, at least not with remuneration to P.J. that would be reportable to the IRS. But when P.J.’s condo suffered damage from intruding tree roots, Callie recognized an opportunity. 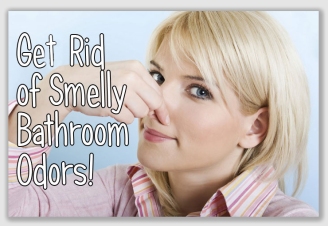 P.J. first convinced the condo association, which owned the offending tree, to cut it down. After that, he sued for the damages the roots had caused his sewer system and basement. But right in the middle of his lawsuit, girlfriend Callie figured that she was really sort of P.J.’s tenant, and her careful legal research – probably Renting Out Your Property For Dummies – she decided that she has been grievously injured by the obnoxious smell in the guest bathroom, which she was certain was from the offending tree roots.

And, this being America, what do we do when we think we have been grievously injured? We sue.

We’ve smelled some pretty malodorous bathrooms before, but tree roots never appeared to be the cause. Still, Callie jumped headlong into her own lawsuit against the condo association and its management company, because – after all – she complained, she had been embarrassed when guests used her bathroom.

The trial and appellate courts made short work of Callie’s complaint. A tenant, they said, cannot sue because of damage to the property being rented. Instead, a tenant has to allege some injury to the tenancy, that is, the tenant’s right to use the property.

Callie’s lawyer (we assume she had one, although not much of one) failed to allege that Callie had suffered any concrete injury because of the smell. What’s worse, the lawyer forgot to produce any evidence that the tree roots had anything to do with the smell at all (if there was a smell). 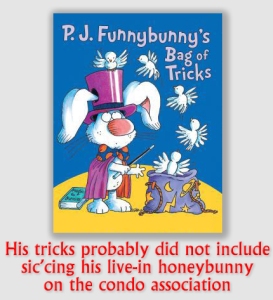 P.J., the property owner, competently handled his lawsuit and won some damages from the condo association. His putative tenant and honeybunny did not.

Larsen v. Snow Property Services, Case No. 1 CA-CV 16-0205 (Ct.App. Arizona, Mar. 7, 2017): Callie Larsen and a guy named P.J. are a couple. (The opinion never mentions P.J.’s surname, but we imagine that it was not “Funnybunny“). P.J. owned a condo in a development controlled by Wind Drift Master Community Association and managed by Snow Property Services. Although she is P.J.’s squeeze, Callie decided she was really his tenant. This epiphany occurred about the time she figured out she could score some money damages from a couple of deep-pocketed defendants.

In 2012, P.J. complained to Snow about damage to the basement walls of his condo caused by the roots of a tree located on Wind Drift’s adjoining property. Snow removed the tree in within about two months.

Callie was not satisfied. She claimed removal of the tree did not resolve the damage, and an unpleasant smell remained in the guest bathroom. In March 2013, P.J. sued Wind Drift, and after a jury trial in 2016, he got a judgment  for the damage the tree roots caused his condo.

Meanwhile, Callie was a busy little tenant (if a tenant she was). She sued Snow and Wind Drift herself in late 2014, alleging negligence, breach of contract, and trespass to her interests as a tenant. The defendants moved for summary judgment, arguing Callie had no proof her tenancy interest (assuming there was one) had been injured or damaged. The superior court agreed, and threw Callie’s case out.

Held: Callie had shown no damages that would let her recover.

Callie complained that the trial court incorrectly determined that, as a tenant, she was not entitled to recover damages for physical damage done to the property that constituted her “tenancy.”

But that was not quite the case. Her trial court held that claims for property damage caused by tree roots are not hers to bring. The court held that these claims, if they exist, belong to the property owner, not the tenant. If the tenant has suffered damage to her tenancy, the trial court said, (that is, her right to possess and enjoy the property), then her remedy is against her landlord under the terms of her rental agreement (which, conveniently, was not in writing). The trial court did not find any admissible evidence of damages to Callie’s tenancy caused by the now-removed toxic tree. Thus, the trial court’s ruling was not based on Callie lacking standing, but rather on a lack of admissible that her tenancy was injured by recoverable damages.

Callie contended there is a “universal rule that tenants may recover for damage to rental property.” Even if that is so, the Court of Appeals said, the tenant still must produce some evidence from which a reasonable jury could find in favor of the plaintiff. Callie claimed negligence, breach of contract, and trespass against Snow and Wind. But each of those, the Court said, requires proof of damages.

Such is always true for negligence or breach of contract. But at common law, trespass required no showing of damage. Callie’s trespass claim, however, was special: she did not claim that Snow or Wind had trespassed, but rather the roots of a tree Wind owned and Snow managed had trespassed. Most states do not recognize the theory that a tree can trespass on behalf of its owner. Not so in Arizona. Even so, Arizona law holds that a “landowner upon whom a sensible injury has been inflicted by the protrusion of the roots of a noxious tree or plant has the right to an action at law in trespass,” but “where there is no injury or damages “no action may be had.”

Contrary to Callie’s claim, the Court of Appeals said, the trial court did not base its ruling on Callie lacking standing to sue, but rather on Callie’s utter lack of admissible proof of recoverable damages as a tenant. Callie’s “tenancy” consisted of the “use and occupancy” of P.J.’s property pursuant to whatever terms their purported oral rental agreement may have contained (or as long as he wanted her, whichever came first). Arizona law defines a tenant as “a person entitled under a rental agreement to occupy a dwelling unit to the exclusion of others.” A.R.S. § 33-1310(16). Thus, the Court said, in order to support her claims against Snow and Wind, Callie had to present admissible evidence supporting her claim of injury to herself or her tenancy, not damage to property she did not own. 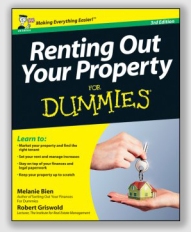 Callie asserted a “loss of quiet enjoyment of property she rented.” The record showed, however, that at all times she was able to occupy, use, and exclude others from the property in a manner consistent with the terms of her purported oral rental agreement. During her deposition, Callie complained about an embarrassing smell in her guest bathroom, but she admitted she continued to use it. She speculated that the odor resulted from one or more pipes cracked by the tree roots, but she did not submit any admissible evidence linking the tree roots to the smell. She claimed there were times she could not park in the driveway due to the root protrusion, but she did not establish any exclusion from use, damage to her vehicle, or costs incurred for alternate parking.

In a last-minute Hail Mary, Callie submitted a report from a real estate broker saying the rental value of the property was diminished by about $800.00 a month as a result of the damage attributed to the intruding tree roots. The Court observed that even if the report were competent evidence of damage, its defects were legion: (1) the real estate associate broker was not shown to be an expert, (2) the report contained the disclaimer that it was “not an appraisal,” (3) the report assumed the smells in the condo were caused by the tree roots without any evidence that was so, and (4) the report was not supported by an affidavit.

The Court said that as for harm to Callie herself, while she asserted she had been harmed by the smelly bathroom, she could not identify any injury other than embarrassment about the smell when guests used the bathroom. She never claimed specifically that the reek harmed her physically or emotionally. More significantly, the Court said, “she has not presented admissible evidence establishing the source of the odor or that the cause of that source of odor is attributable to Defendants. Stated simply, the evidence offered by [Callie] does not rise above allegation and speculation.”