Strict liability statutes, also known as “liability without fault,” occupy the blameless end of the “mens rea” spectrum. Our traditional notions of fair play lead us to believe that people should not be held to blame for injury unless they are somehow at fault, either being negligent, grossly negligent, reckless, or just plain acting with intent to bring about the harm they cause.

But at common law, some acts were considered to be so inherently dangerous – the classic case was a lion that escaped from a keeper of exotic animals – that courts let the res ipse loquitur, the “thing speak for itself,” and found the owner liable for whatever mayhem ensued from a force that had once been under the owner’s control. Negligence need not be shown.

Remember the radioactive spider that bit Peter Parker and made him super-powered Spiderman? Peter (or maybe Spidey) could have sued the lab that let the spider escape. Everyone knows that a radioactive spider is an inherently dangerous instrumentality, and whoever the last guy was to have the arachnid in captivity had better be prepared to pay big, regardless of whether he was at fault or not.

But should strict liability extend to dogs? Speaking as the owner of a 37-lb. canine who is a terror to woodchucks but a marshmallow around humans, we don’t really see why they should. Nevertheless, many states have dog bite statutes that make owners strictly liable for their canines’ misdeeds, regardless of fault. To be sure, some of the statutes are hybrids, making the owner absolutely liable except for all the cases in which he or she is not. In today’s case, the statute at issue made an owner strictly liable for his or her dog’s bite, unless the person so bitten was engaged in criminal trespass or other criminal conduct, or was tormenting or teasing or harassing the dog. So the owner is absolutely liable… sort of.

Today’s case is the kind of tree law/neighbor law mashup that you have come to rely on us to deliver. The trial court here made the tree trimmer into a trespasser, despite the obvious fact that the power company had every right to enter its easement to prune back trees. The Court of Appeals could not swallow that, but instead suggested that while not a trespasser, the employee owed the dog’s owner notice that he was entering the premises, so the owner had the chance to control his dog.

With Chief Justice Roberts disappointing troglodytes everywhere by deciding cases according to his perception of the law rather than the politics (you can tell I’m a fan of Supreme Court judges who act contrary to their perceived politics), there will be a lot of talk over the next few months about “judge-made law.” You want to see judge-made law? Just look at the gyrations of the trial and appellate court in the case below.

The judges here clearly could not accept that the dog’s owner should have to pay, when the dog had been contained in a yard behind a fence and a “no trespassing” sign, but a stranger – regardless of intention and right – barged in anyway, and complained because the dog chased him. And they found a way to bend the law to suit their sense of propriety.

Collins v. Bergman, 2010-Ohio-6213 (Ct.App. Montgomery Co., Dec. 17, 2010), 2010 Ohio App. LEXIS 5233, 2010 WL 5274. Jason Collins worked for Nelson Tree Service, which was under contract with the power company to remove trees that were too close to utility poles and lines. Jason’s job was go from house to house inspecting inspect all trees encroaching DP&L utility lines and poles, so any trees too close could be trimmed back at a later time.

When Jason reached Jeff Bergman’s house, there was no answer when he knocked on the door. Jason left a courtesy card on the door, notifying Jeff that a tree trimming would occur in the future. Jason then went around the back of the house to count the trees. He could hear a dog barking. The dog was a Labrador-Rottweiler mix named Taz. Jason didn’t know Taz had a dog door giving him unfettered access to the back yard.

Jason could see that Jeff and his neighbor had built 6-foot privacy fences, which made it impossible for the power company to check its easement. Thinking that Taz was inside, Jason entered the fenced-in back yard through a gate marked “no trespassing.”

Taz was not inside. As Jason fled the barking dog, the cantankerous canine planted his fretwork in Jason’s pant leg. Jason tried to climb the privacy fence, but fell back, injuring his shoulder.

Jason sued Jeff under Ohio’s dog bite statute, O.R.C. 955.28. Jeff filed for summary judgment. At the time, that statute provided that “the owner, keeper, or harborer of a dog is liable in damages for any injury, death, or loss to person or property that is caused by the dog, unless the injury, death, or loss was caused to the person or property of an individual who, at the time, was committing or attempting to commit a trespass or other criminal offense on the property… or was committing or attempting to commit a criminal offense against any person, or was teasing, tormenting, or abusing the dog …”

The issues in this case were whether Jason entered Jeff’s property pursuant to the utility easement, and whether he was a trespasser within the meaning of the dog bite statute. 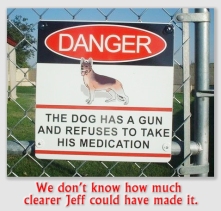 The court determined that Jason was injured within the easement, where he had a right to be. However, the court said, the easement did not provide a specific place for the utility to enter the property, and therefore Jason was required to make use of the easement in a reasonable manner. The court found that Jason did not act reasonably in deciding to enter Jeff’s property without notice and through a latched gate and a fence with a posted “no trespassing” sign. The court also noted that Jason failed to follow his own company’s policy in entering a property when there is a dog barking in an enclosed area. Because Jason did not make reasonable use of the express easement granted the utility company, he was a trespasser within the terms of O.R.C. 955.28(B). The trial court granted Jeff’s summary judgment motion.

Held: Jason was a trespasser and not entitled to damages.

The Court of Appeals agreed with Jason that he had a right to enter the easement, and because it was blocked, he the only reasonable avenue open to him through the backyard fence.

However, in determining whether a person is a “harborer” under the statute, the Court said, “the focus shifts from possession or control over the dog to possession and control of the premises where the dog lives.” The hallmark of control is the ability to both prevent and exclude others from coming onto the property. Because Jason entered the property without permission, Jeff lost the ability to control his property at the time of the incident. Thus the trial court properly denied Jason’s motion for partial summary judgment and properly granted summary judgment to Jeff on the O.R.C. 955.28 claim.