A PRESCRIPTION FOR TROUBLE

We all know about adverse possession, that peculiar legal doctrine that holds in essence that if you’re brazen enough to trespass on someone else’s land continuously for a period prescribed by statute, the property becomes yours. In most places, such as Pennsylvania, the period is 21 years long. So for 20 years, 11 months and 31 days, you’re a squatter. The next day, you’re landed gentry.

It seemed to me like judicially-sanctioned theft when I learned about adverse possession in law school (so long ago that twice the statutory period has passed since I walked those hallowed halls). The theory, my property professor droned, was that public policy favored productive use of the land, and taking over a piece of land from an owner careless enough to let you take it over put it to a more productive use, and thus should reward the taker. So if I like my piece of country property as a preserve for the birdies and little critters, and you want to bulldoze it for a new Starbucks, you win. The whole notion seems as cockeyed to me now as it did when I was a well-scrubbed and wide-eyed first-year law students back in the halcyon days of the 1970s. 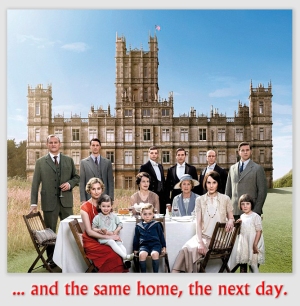 To claim adverse possession, you have to show that your occupation of the land was open, notorious, hostile and adverse to the interest of the owner a continuous period of whatever the statute prescribes, say 21 years as an example. Some might say that if you built your Starbucks on my forest plot, and I did nothing about it for that long, I deserve to lose my land. To which I might reply that the law does not seem to offer much protection to someone when his or her property can be lost to another person simply because the thief gets away with it for long enough.

But if I thought adverse possession was screwy, I was hardly prepared for its little brother, a  prescriptive easement. Adverse possession is occupation of the land. A prescriptive easement is a mere use of someone else’s land without exclusive occupation. My kids cut through the neighbor’s side yard for years as a shortcut to the church. I still do it when I’m running late. If now, 25 years after the neighbor’s house was built, he put up a fence to stop us, should we be able to claim a right to have the fence removed so that we can continue to save five minutes getting to worship? What we would have, we could argue, was a prescriptive easement.

I once had a client who was about to build a garage on a piece of his land. The power company sued, because lines that went behind his property for years had been slightly rerouted so that they crossed a corner of his place. The electric company said it had moved the lines a convenient 23 years before, and now it had a prescriptive easement, which limited my client’s use of a quarter of his property to a vegetable garden.

We stared down Reddy Kilowatt in that case, because we located an aerial photo of the town from 20 years before that showed the electric company was bluffing, and the lines had not been moved as of that date. My client sold the electric company an easement over 50 feet of back yard for about $30,000. Happy ending.

As much as I dislike the whole notion of prescriptive easements, I admire creativity. I always thought of such easements as being created by the deliberate actions of humans. My kids cut across the neighbor’s lawn. The power company restrung its lines. But the plaintiffs in today’s case showed creativity I lack. Here, they claim a prescriptive easement not because of what they did, but because of what their tree did. Because the limbs and roots of a tree they owned grew into a neighboring property and remained there for more than 21 years, they argued, they had thus obtained a prescriptive easement that would prevent the neighbor from doing anything to the tree. It’s as if the Massachusetts Rule had an expiration date.

At first blush, it seems to ring all the prescriptive easement bells, and seemed pretty doggone clever. But after thinking about the whole notion for long enough, the appeals court wisely said it simply did not make sense.

Koresko v. Farley, 844 A.2d 607 (Pa.Cmwlth. 2004). The Koreskos bought property with a line of trees on one boundary, all of which had been there more than 21 years, which hang over the boundary with the neighboring property containing a house, owned by M.J. Farley Development Co. Inc. Farley had submitted a subdivision plan seeking to divide the property into two plots, and to build a second residence on the newly-formed plot.

The subdivision plan proposed to place a water line and driveway near the boundary trees. Upon learning of the proposal, the Koreskos sued in equity seeking injunctive relief and, of course, money damages. In their complaint, the Koreskos claimed the driveway and trench would damage the root systems of the boundary trees. Among their claims, the Koreskos alleged unreasonable interference with their prescriptive easement. They claimed that because their trees’ roots and branches encroached on the subdivided property for over 21 years, a prescriptive easement existed for the tree roots and branches, and that development of the property would unreasonably interfere with that easement; and

After the trial court held that “Pennsylvania does not and will not recognize an easement for tree roots or overhanging branches,” the Koreskos appealed.

Held: Pennsylvania will not recognize a prescriptive easement created by the growth of a tree.

A prescriptive easement is a right to use another’s property which is not inconsistent with the owner’s rights and which is acquired by a use that is open, notorious, and uninterrupted for a period of 21 years. A prescriptive easement, once acquired, may not be restricted unreasonably by the possessor of the land subject to the easement.

The law holds that overhanging tree branches are a trespass. In Pennsylvania, a landowner has the right either to compel removal of overhanging branches or to engage in self-help. However, the Restatement notes that a continuing trespass is not a trespass at all if the actor causing the trespass has obtained an easement by adverse possession, and ponders openly whether the continued presence of encroaching tree branches, held openly, notoriously, hostilely, and continually for 21 years would create a prescriptive easement in the airspace which they hang.

If this were the case, the Court said – noting it could find no Pennsylvania law which would indicate that a prescriptive easement was not available in this situation – a landowner who suffers actual harm for the first time during the tree owner’s 22nd year of hostile ownership would be precluded from seeking any remedy whatsoever, even self-help. However, the Court said, if an action is available without a showing of damage – and a trespass action assumes damages, so it can be brought whether the trespasser has actually injured the victim’s property or not – the landowner has no reason to complain if a neighbor’s tree causes damage after the prescriptive period has run, because he or she could have sued at any time during the 21-year period.

The Court held the Koreskos failed to state a claim for prescriptive easement as a matter of law. No Pennsylvania case has held such easements are cognizable, the Court said, and other jurisdictions have reasoned that such should not be recognized. Finally, the potential of widespread uncertainty occasioned by such easements convinced the Court that they should not be recognized as a matter of public policy.

The Restatement holds that, to be adverse, a use must be open and notorious is for the protection of those against whom it is claimed to be adverse. It enables them to protect themselves against the effect of the use by preventing its continuance. This requirement may be satisfied by a showing that either the land owner against whom the use is claimed has actual knowledge of the use or has had a reasonable opportunity to learn of its existence.

Encroaching tree parts, the Court held, by themselves do not establish “open and notorious” use of the land. Neither roots below the ground nor branches above the ground fairly notify an owner of a neighbor’s claim for use at the surface. In the absence of additional circumstances, roots and branches alone do not alert an owner that his or her exclusive dominion of the ground is challenged. This is no different from prior legal decisions that already held that the known presence of windows near a lot line does not create a prescriptive easement for light and air.

In a Kansas decision, an appeals court in the Sunflower State held that an easement by prescription cannot be acquired by overhanging tree branches, said:

The result reached here will be distasteful to all who treasure trees. The philosophy of the law is simply that whenever neighbors cannot agree, the law will protect each owner’s rights insofar as that is possible. Any other result would cause landowners to seek self-help or to litigate each time a piece of vegetation starts to overhang their property for fear of losing the use or partial use of their property as the vegetation grows.

The Koresko Court said, “We agree with this reasoning and holding… and we expressly adopt it in Pennsylvania.”

Finally, the Court considered the consequences of the holding urged by Koreskos. Trees growing over property boundaries and streets, around utility lines, and under sidewalks are common in Pennsylvania. “A decision suggesting that the prolonged presence of these tree parts assures their unreduced continuation could cause uncertainty,” the Court held. “Both the extent of the prescriptive easement and its effect on public and private use are problematic. As a matter of sound public policy, we decline to recognize a new estate which offers uncertainty and invites clarification through litigation.”