MY DAD’S GONNA SUE YOUR DAD

We had some great trees in our back yard when I was a kid. My parents let each of the four of us children “claim” one of the trees as our own, although I must now confess that the utility of doing so is no longer obvious to me. My sister staked out the sugar maple on the north side of the house, my brothers had a box elder and a red maple, respectively, and I got a magnolia that stood outside the kitchen window.

It’s not like we children had any responsibilities for our trees, either trimming them or raking up their leaves or even pulling suckers off their trunks. We had ownership but no responsibility, which is a great segue into today’s classic case from New Jersey.

I bring up our “claimed” trees because of the young rascal Rick, an ornery kid who lived next door. One warm rainy day in the spring, when intelligent people were inside to avoid getting wet (and you can see what that implies), young Rick was outside playing in the downpour. He somehow decided that conditions were perfect for climbing my magnolia. However, when his foot slipped on a wet branch, gravity ensued. Rick was treated to what would have been a jarring but harmless fall, except for his chin making rather sharp contact with the branch on the way down.

We were blissfully unaware of the life-and-death drama occurring beyond our kitchen window until the next day, when Rick – with chin stitched and bandaged – told my siblings and me what had happened. He matter-of-factly announced that because of the accident, “My Dad’s gonna sue your Dad!”

I recall being shocked that an injury so directly resulting from Rick’s own knuckleheadedness could somehow strip us of all possessions and leave us living in a cardboard refrigerator carton in the back lot of Brown & Miller’s Hardware. Of course, Rick’s appreciation for the finer points of tort law matched his understanding of gravity, and no suit ever resulted. But I found the idea alarming that merely owning a tree, and letting it be a tree, could make us liable for injury to others.

But notion is not so ridiculous that people aren’t still trying to sell it to trial courts. Today’s case resulted from a perfectly healthy tree falling from one property onto a garage on another property. The aggrieved property owner argued that the tree was a nuisance because it fell – for whatever reason – and because it was a nuisance, the tree’s owner was liable. When I read the case, I felt that alarm young Rick engendered in me all over again. Fortunately, the appellate court was not so cowed by the premise that it could not make short work of such a foolish claim.

So what is the standard to be applied to determine liability of a landowner for a tree which falls from his property onto his neighbor’s property for no apparent reason? 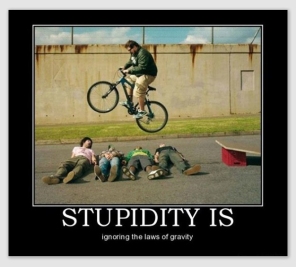 Burke v. Briggs, 571 A2d 296 (N.J. Super.Ct. 1990). Robert Briggs and the Burkes owned adjoining properties. One June evening, a large white oak tree growing on Bob’s property suddenly fell over onto the Burkes’ property, crushing their garage. The tree appeared to be perfectly healthy, and no one could assign a reason for its falling.

That hardly stopped the Burkes, who sued Bob for negligence but later added a count citing the elements of a nuisance. The Burkes argued Bob was “strictly liable” for the damages caused by the fallen tree because it amounted to a nuisance. Bob countered that liability should be determined on the basis of traditional negligence principles of tort liability. The trial judge agreed with the Burkes that reasoned the fallen tree constituted a “nuisance” because Bob had failed to use his property in a manner that did “not damage or unreasonably interfere with the use of an adjacent land owner’s property.” The judge said that a private nuisance “imposes a strict liability” on the responsible party, and summarily found for the Burkes without the need for a trial.

Held: A nuisance can only be created by unreasonable use of land, meaning that the trial court must look at the circumstances of the case to decide whether Bob was unreasonable in permitting the tree to grow as it did. Thus, the lower court was wrong to decide the matter without a trial. 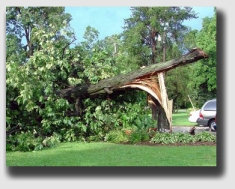 The appellate court noted the distinction that had arisen in tree law over the years between conditions of land artificially created as opposed to those which come into existence naturally. Historically, if Bob’s tree had been growing there on its own, he would not have been liable for any damage it caused, but if he had planted it or nurtured it, he would be accountable. The appellate panel concluded that the natural-artificial distinction makes little sense in modern life.

The appellate court admitted that “there is perhaps no more impenetrable jungle in the entire law than that which surrounds the word ‘nuisance’,” but it nonetheless held that the law was clear enough that a private nuisance must based on the defendant’s interference with another’s use and enjoyment of his or her own land. The superior court fell back on the Restatement, Torts 2d for the general rule that

One is subject to liability for a private nuisance if, but only if, his conduct is a legal cause of an invasion of another’s interest in the private use and enjoyment of land, and the invasion is either

(a) intentional and unreasonable, or

(b) unintentional and otherwise actionable under the rules controlling liability for negligent or reckless conduct, or for abnormally dangerous conditions or activities.

The appellate court held that liability without fault should not be imposed “whether that activity be classified as a nuisance or a trespass, absent intentional or hazardous activity requiring a higher standard of care or, as a result of some compelling policy reason.” 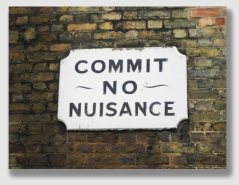 In other words, the appellate court said, regardless of whether the falling tree was a nuisance, trespass or negligence, “the issue here should logically depend on whether the offending landowner somehow has made a negligent or unreasonable use of his land when compared with the rights of the party injured on the adjoining lands.”

So, the court concluded, the focus in the case should be on whether Bob was negligent in some way. To figure this out, the trial court should have considered the nature of the incident, the danger presented by the presence of the tree, whether by making inspections, Bob could or should have known of the tree’s condition, and what steps Bob could have taken to prevent it from falling onto the Burke’s garage.