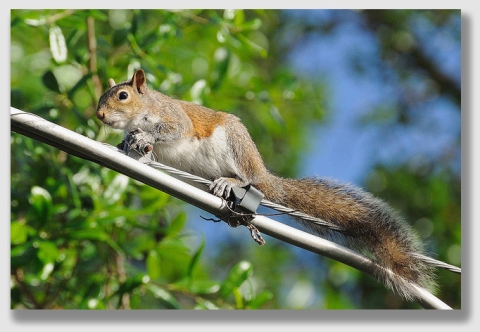 Last summer, we looked at a case in which a squirrel frightened a Massachusetts resident who was taking out her garbage. Today, it’s deep fried southern squirrel… or at least that’s what the plaintiff had on her hands.

Mrs. Pardue was talking on her cordless phone when a squirrel jumped onto a power company transformer and closed the circuit. The squirrel got zapped (it happens, you know) when it jumped from an untrimmed tree to the transformer. The power went out, and an “acoustical shock” — which the plaintiff called an explosion — came from the cordless phone and injured Ms. Pardue.

She of course sued the power company for not trimming the trees. That was a little too much for the trial court, which threw out the case. The Court of Appeals agreed. Remember that Louisiana civil law is a little different: down in bayou country, the standard is “ease of association,” the likelihood that the complained-of conduct could have been foreseen to cause the damage. It bears a resemblance to Palsgrafian causation.

A reasonable person can imagine lot of bad things happening as a result of power companies not trimming trees, but the Court held that loud noises coming out of cordless phones wasn’t one of them. Rube Goldberg would have been proud.

Pardue v. AT&T Telephone Co., 799 So.2d 710, 2001-0762 (La.App., 2001). Louise Pardue was at her cordless phone at home when there was a sudden explosion in the handset and, simultaneously, the electricity went out at her home. After Central Louisiana Electric Company (CLECO) was notified of the outage, its personnel fixed the problem, later reporting Ms. Pardue that a dead squirrel was found on the line.

According to Ms. Pardue’s expert, the squirrel’s presence on the lines caused an electrical surge into the ground system that was shared by the telephone line. Although the expert admitted it would have been “a very difficult thing” to get an electrical shock from a cordless telephone, he opined that the electrical surge created an acoustical shock, that is, a loud noise. As a result of the incident, Ms. Pardue immediately developed a headache and experienced ringing in her ear, followed by problems in her neck, shoulder, arm, and foot.

She sued the phone manufacturer (who was dismissed) and CLECO, seeking damages related to the alleged injuries, claiming that the power company was negligent in failing to adequately trim the trees around the line so as to prevent the squirrel’s interference with the transformer. CLECO filed a motion for summary judgment, which the trial court granted.

The court held that “we don’t know that the squirrel came from the tree, or whether it climbed the pole that the transformer was on, or it climbed another tree, or another pole. I think that when you do the first analysis, the ‘but for’, you can’t answer that; and when you can’t answer it, under the jurisprudence, then the plaintiff’s action fails and a motion for summary judgment in this instance is warranted.”

Held: Ms. Pardue’s suit was dismissed. The Court of Appeals observed that negligence cases require consideration of the duty/risk analysis. A plaintiff must prove the defendant had a duty to conform his conduct to a specific standard, the defendant failed to conform to the appropriate standard, the substandard conduct was a cause-in-fact of the plaintiff’s injuries, the defendant’s substandard conduct was a legal cause of the plaintiff’s injuries, and plaintiff’s actual damages. For the purposes of negligence analysis, the risk cannot be held to be within the scope of a duty where the circumstances of that particular injury or of the plaintiff could not reasonably be foreseen or anticipated, because there was no “ease of association” between that risk and the legal duty.

Cause-in-fact determinations are factual in nature, while the legal cause or scope of the duty determination is a legal one. Here, the Court ruled, CLECO — the electric utility — did not owe a duty to protect Ms. Pardue a duty. Even assuming CLECO had a duty to maintain the trees surrounding its lines, the Court said, the scope of that duty did not extend to protect Ms. Pardue under the particular facts of this situation.

Ms. Pardue was at home talking on a cordless telephone (and the Court emphasized the word “cordless”). Not only did an animal gain access to the transformer, but the resulting outage caused an “acoustic” shock — not an electric shock — sufficient to result in serious injury. In the least, the Court held, under the particular facts and circumstances of this case, there is no “ease of association” between that risk and the legal duty.