NOT EVERYTHING IS SOMEONE ELSE’S FAULT

The utility pole was one of those older styles with metal foot pegs that began more than seven feet up the pole, high enough that trespassers (such as young boys) could not reach them. Unfortunately, the utility company did not reckon with the determination of Julian Terry. The intrepid young man climbed a tree next to the pole until he got high enough to reach the iron pegs on a utility pole, then climbed using the pegs and tree branches together.

Alas, it was an accident looking for a place to happen. Julian’s foot slipped off a peg. He grabbed a tree branch, which broke beneath him. Julian seriously injured his arm on the iron rod that stopped his fall.

Julian’s mom wasted little time suing the electric company and two phone companies, all of which were using the pole. She argued the utilities created a dangerous condition when they allowed a tree to grow near the utility pole, because the tree made it possible for little urchins like Julian to climb 8 feet up to the iron pegs.

Come on, man… There’s a reason the law requires that defendants actually have a duty to the plaintiff before they have to pull out their checkbooks. As we all learned back law school when we read Palsgraf v. Long Island Railroad, “the risk reasonably to be perceived defines the duty to be obeyed, and risk imports relation; it is risk to another or to others within the range of apprehension.” (Regular readers know how I love Palsgraf).

I recall going down the basement once to discover that my then 8-year old son and his cousin had coated the concrete floor with WD-40, and were gleefully sliding around the room on pieces of cardboard. Should I have sued The WD-40 Company?

There was a lesson there for me, just as there was for Mrs. Terry. No adult has sufficient capacity for imagination to reasonably foresee what kids might do.

Terry v. Consumers Energy Company, 2016 Mich. App. LEXIS 303 (Ct.App. Michigan, 2016). Nine-year-old Julian was injured after he fell while climbing in a tree next to a utility pole. His goal was to climb high enough to reach the iron climbing pegs on the pole, which started at over 7 feet off the ground precisely to keep curious kids from using them to climb the pole. 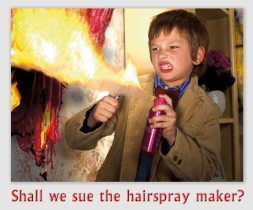 Julian’s foot slipped from a metal peg, so he grabbed a tree branch to break his fall. The branch broke instead, and Julian seriously injured his arm on an iron peg on the way down. His mother sued, alleging the defendant power company and telephone carriers using the pole had created a dangerous condition when they allowed a tree to grow nearby. The defendants moved for summary judgment, arguing that they had acted reasonably in placing the pegs on the pole. Mrs. Terry responded that the defendants had a duty to reasonably inspect the pole and trim the tree to prevent the hazard.

Here, no one disputed that climbing pegs on the pole were over 7 feet off the ground, and that nothing about the pole itself was unreasonably dangerous. In fact, the Court said, the Defendants exercised reasonable care when they placed the pegs higher than even an adult could reach. 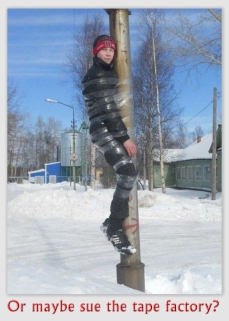 But Mrs. Terry claimed the defendants had a duty to inspect the nearby trees to ensure that they did not provide access to the power line. This case is different from one where a defect in the pole or wires caused the electrocution of someone holding a ladder nearby: there, the power company had “an obligation to reasonably inspect and repair wires and other instrumentalities in order to discover and remedy hazards and defects.”

Here, by contrast, Mrs. Terry sought to hold the defendants liable “for a condition of land aris[ing] solely from a defendant’s status as an owner, possessor, or occupier of the land.” She offered no evidence that the utilities owned or controlled the tree that Julian used to circumvent their safety precautions. The Court said, “Defendants are no more responsible for the tree that Julian used to circumvent that precaution than they would be had Julian used a ladder to reach the rods.”

We have to admit that we’re a bit confused by the holding’s failure to consider the location of the tree. Presumably, if it was close enough to the pole for young Julian to use it to gain access to the climbing pegs, it was within the utilities’ easement (and was probably too close to the wires). We question whether the utilities did not “control” the tree. But, as old Judge Miller used to tell us when we were young lawyers (a long time ago), you dance with the girl who brung you. If Mrs. Terry offered no evidence about an easement that permitted the utilities to trim (or even remove) trees, the trial court was not free to imagine it.